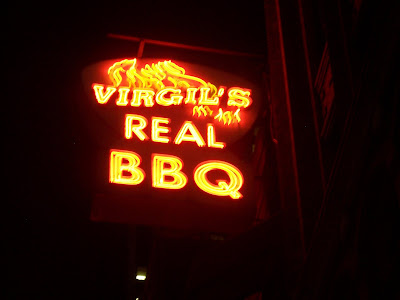 The time – a little while ago. The place – another rainy day in New York City. The rain is pounding hard as I dash across the intersection of 52nd Street and 7th Avenue. Imagine if this were snow, as the New York DJs always say. Already, the day is damp, unremarkable, and just a bit grim. But, as I scamper over the asphalt and look down, I spot a soaked $20 dollar bill underfoot. I scoop it up, wring it out, and shove it into my pocket. Now, there’s a ray of sunshine. I know exactly how I’ll use this found money. My colleague “Splint McCullough” is in town after a long absence. Splint is a fellow road warrior and my barometer for the dining preferences of the Everyman. The $20 will pay for the first round of drinks at dinner. Not that we need an excuse for drinks with dinner …

Lately, Splint’s been on a physician-imposed diet, strictly enforced by his wife “Blanche” who definitely wears the pants suits in that family. I’m a little worried about coercing Splint into an excessive meal, because I’m not sure I want to tangle with Blanche. But, all I need to do is dangle a little red meat under Splint’s nose, and he is complicit.

The dining hour approaches and Splint and I set out for Virgil’s Real BBQ, a New York institution. Well … it’s an institution to New York tourists. The last time I was at Virgil’s was the night President Clinton admitted his affair with a White House intern to a national television audience. The confession was broadcast on the big screen in Times Square. To this day, I still associate southern barbecue with infidelity.

Splint fancies himself a Memphis barbecue veteran, and in a past life he was a player on the Memphis chow circuit. We turn the corner at 44th Street and inhale the aroma of charred meat. The red neon Virgil’s sign winks at us and another neon sign in the window announces “Home Cooking.” 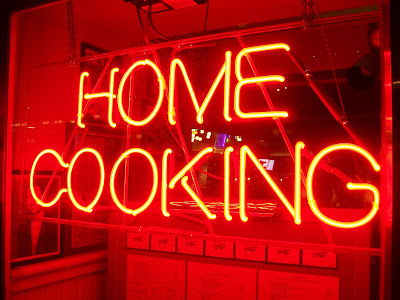 Splint raises an eyebrow. “You can’t claim “real” barbecue unless someone’s been shot on the premises,” he declares.

Inside, the patrons look very much alive and we are seated at the bar to wait for a table. The air is singed with fragrant barbecue smoke. I fork over the still-damp lucky $20 for a round of spicy Bloody Marys, that are more Worcestershire sauce than vodka. I ask Splint for his assessment of the clientele. He studies the room. 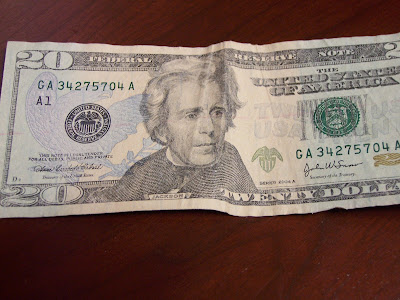 “They’re poseurs,” he pronounces, finally. “Nobody here would know real barbecue if Big Bob Gibson walked up and slapped them in the face with some ribs.”

We swig our Bloody Marys and Splint chats with the bartender about the photos of Elvis impersonators over the bar. We are told that they are regulars. Shortly, we are seated by a sunny hostess, born and raised in Texas. “Keep that smile,” Splint tells her. 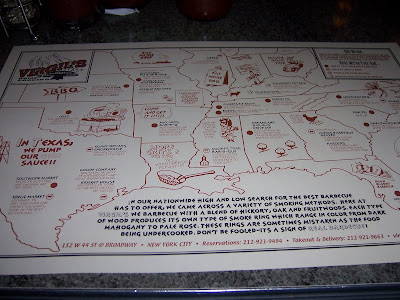 Our place settings include a paper placemat with a printed illustration of the United States with top barbecue restaurants – those spots where the Virgil’s staff got its inspiration. It’s kind of a Michelin Guide complete with barbecue sauce stains.

Our utensils are wrapped in large red terry cloth hand towels. “I don’t think this is the kind of place where you need to ask the thread count,” says Splint.

He takes a quick glance at the menu and announces, “It’s virtually impossible to eat healthy, so I’m diving in.” For our appetizer, we share a football-sized platter of Hush Puppies – tender, deep-fried corn batter – with a side of maple butter. Splint offers up a few tidbits of culinary history he has picked up in the Deep South. Either that, or he’s cribbing anecdotes off the placemat. 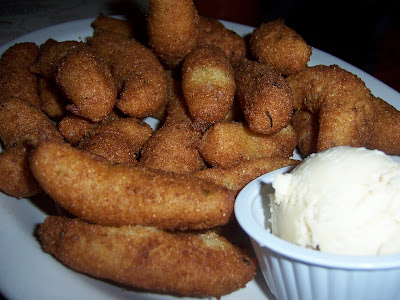 “Did you know that Hush Puppies got their name because in the South, dogs would roam the fields, and the farm workers would toss them a handful of cornmeal to keep them quiet, or hush the puppies?”

He holds up a single, fried morsel and gives it a look of adoration. “In my opinion, a Hush Puppy is really just a delivery vehicle for the maple butter.”

Splint offers ongoing commentary as I examine the menu, explaining that barbecue sauce in North Carolina is vinegar-based, while in South Carolina, the sauce is tomato-based. And, if you travel further South or West, the sauce is usually sweeter. By now, I’m convinced that Splint has been watching too many “Boy Meets Grill” marathons on the Food Network. I order a mixed platter of North Carolina Pulled Pork and Texas Beef Brisket with sides of slaw and Georgia Pecan wild rice. 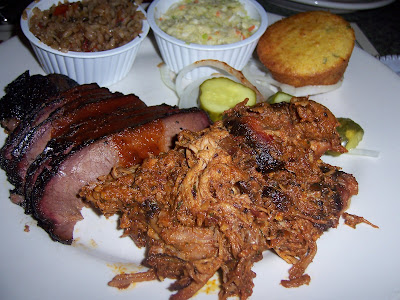 The health-conscious Splint has chosen Virgil’s Barbecue Salad, a large bowl of greens with about two pounds of barbecue beef piled on top. “They throw some shaved carrots on top to give the illusion of healthy, but it’s still a heart attack in a bowl,” he notes.

Splint picks carefully at his salad. The man eats like a bird now. I devour my scorched brisket dressed in a perky barbecue sauce and chomp on the crunchy Cole slaw. The pulled pork has a nice tang.

“When my wife asks, what did you order? I can truthfully say salad," says Splint, "Until she reads your blog, of course.”
In between bites, the waiter gives us the lowdown on the smokers in the back of the restaurant. Virgil's uses a combination of hickory, oak and fruitwoods. Splint bemoans that fact that his wife has become a fan of "Cooking Light." During a trip upstairs, I note that a group of tough guys are wearing pointed Happy Birthday hats, and at the table next to us, a patron has been composing a haiku on his Blackberry. It's a typical night out in New York City.

The waiter clears away the plates and we are given hot towels. "Classy touch," notes Splint.
We are too full for dessert. In Splint’s case, no doubt it was all the fiber in that salad. The bill arrives and the barbecue salad is a mere $9.50. Splint remains the quintessential cheap date.

He sighs. "Taking me here on a diet is like watching those football players on "Dancing with the Stars." It's entertaining, but unsettling." 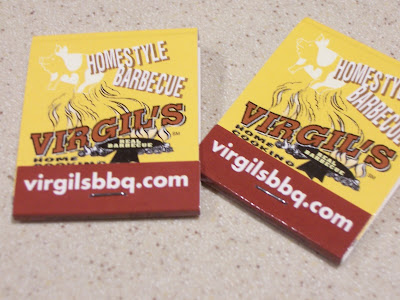 As we leave, I grab a handful of the obligatory dining souvenier – matchbooks. It’s quite possibly the only tool I’d really need to recreate genuine Southern barbecue at home. I note that Splint is actually looking a bit gaunt. I'll have to talk to Blanche. He could use a couple of good "stick-to-your ribs" meals.

How lucky for you to find $20! That sorta makes up for the damp rainy day. Yeh, we had that yesterday and it was quite depressing. Now that's a nice plate of meat! Nice trivia with the hush puppies. And did you know in other cultures, bbq means anything grilled on a stick.

That meal looks so good! A Bloody Mary is a good thing to buy with found money. I love them. HVD, btw :)

Virgil's sounds like my kind of place. For me, the dive-ier, the better! I'm a sucker for good brisket, especially if there's a respectably hot BBQ sauce to spray all over it.

Thanks a lot for bringing to my attention that I could use hush puppies as a delivery vehicle for maple butter. Would never have thought of that. Interesting that Virgil's is a tourist destination--Barbecue would be the last food I'd be studying in NYC. Looked at the menu and I would have chosen the pulled pork too, or the lamb.

This is so funny, I was just there when I was in NYC last week! You made a mistake not leaving room for dessert though. A grave mistake, my friend. The banana cream pie...

That's great to find $20 just before going to a restaurant. I did not know it was raining in New York. We get our share of rain, here on the Island. I'm glad you had a good night.

Hi Veron - as an avowed carnivore, you would love the selection. I didn't know that BBQ was anything grilled on a stick in other cultures - that will be important to my colleague Splint!

Hi Maryann - it was a real treat, and the Bloody Mary's were quite potent!

Lydia - If you like dives, I'll have to introduce you to my colleague, Splint. He's an expert on such establishments.

Kathy - No doubt you've got some pretty good options for BBQ in Texas? Is it true that the sauce is sweeter?

Cakespy - shame on me. Next time I'll start with the banana cream pie!

Helene - that $20 really made my week - usually it's just pennies!

"They're poseurs," just cracked me up.

I have to say NYC is the last place I'd expect to see BBQ. I grew up in North Alabama, and the BBQ is not cooked in any sauce there. (it's juicy but plain, and you then add your own sauce/mayo/slaw. Or it's served on a baked potato with toppings) Then I moved to South Alabama and was shocked to get meat cooked in this red spicy sauce. My parents now think it's funny that every time we come in for a visit we have to make a trip to Big Bob Gibson's.

Susan - I think you would like Splint. You both have an uncanny ability to size up a room!

Hi Jerri - It seems like there are so many regional styles and variations of BBQ. At Virgil's they appear to be taking the best of what they found across the US and creating a "melting pot" approach of BBQ techniques.

I love the bit about the hush puppies! I've never been to Virgil's but now I might make a stop... thanks!

Hi Alejandra - thanks for stopping by! I'd recommend going a little later than we did - aim for after the curtain goes up at the theater and you have a better shot at a table upstairs, which is probably better.

I talk about you on may blog and gave you an award. Have a good day.

So pleased that Splint is back in action.He brings a nonchalant air to life - most attractive.I see him in a Fedora tipped at a rakish angle, tie loosened, jacket slung over shoulder. Am I close?
Interesting about the Hush Puppies - they are a brand of shoe here in the UK.
Colette

Hi Colette - Yes, there is "joy in Mudville" whenever Splint McCullough returns to New York. He makes even a crisis seem like a walk in the park. As for your somewhat fanciful vision of Splint, I will not burst your bubble. Some things are better left to the imagination.