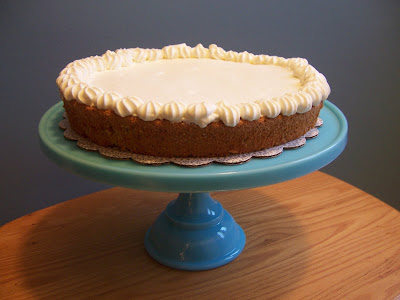 Over the years, my mother would often mention Tante Kremer’s Hungarian Nut Torte. It was a favorite from her childhood and she’d tried to bake it as an adult, but had not had much success. It is just days before Christmas, and I have decided to see if I can create a special gift for Mom. I will attempt to recreate Tante’s Hungarian Nut Torte. Marcel Proust said flavors could inspire a range of memories, so what better gift to give a loved one at the holidays?

The recipe is written in my Grandmother Hilda’s handwriting. Apparently she wrote it down for my mother shortly after she and my dad got married and made their home in Far Rockaway, Long Island. It seems deceptively simple, but I immediately notice some possible gaps in the recipe. 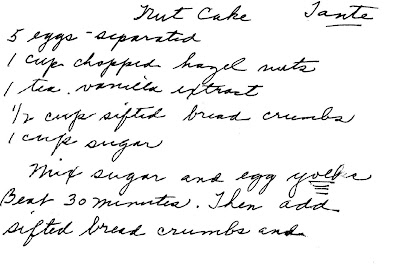 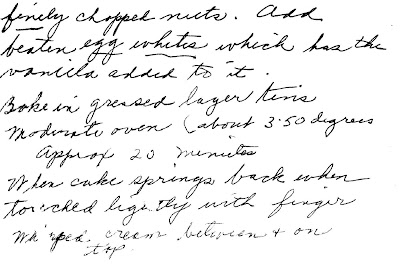 I remember stories of Tante and Uncle. I have vague memories of meeting them, and sitting as a child on what seemed like a vast staircase in their entry hall in College Point, Long Island.

Mom adds the additional history that I’m missing. She writes:

We called her simply “Tante” and her husband “Uncle.” But they were Elizabeth and Joseph Kremer, my father’s aunt and uncle who had emigrated from Hungary. My father’s mother died when my father was a teenager and Tante mothered him from then on. Tante and Uncle’s home in College Point, Long Island became Dad’s home more than his own. In fact, I never remember talk of any other home. Dad absolutely adored Tante and Uncle and his three cousins Rose, Katie and Margaret. He became one of their family. 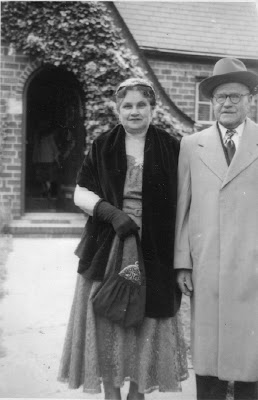 Tante was an excellent baker and had several specialties that were baked year in and year out for the holidays and for celebrating special occasions like birthdays and anniversaries. I remember four types of cookies: 1) Kupfel (horn) filled cookies made with cream cheese and butter, which were like mini-croissants filled with apricot or prune butter, 2) Walnut Egg White Kisses like swirls of meringue with a walnut half in the middle that just melted in your mouth, 3) Hard, flat, round anisette cookies about the size of a 50 cent piece, 4) Rolled butter cookies cut in shapes – stars, crescents, diamonds, hearts – brushed with egg whites and sprinkled with finely chopped nuts mixed with fine granulated sugar – so fragile and delicate they just melted in your mouth. My Mom became very proficient at making the rolled butter cookies. For Christmas Eve, Tante made round donuts with coins baked in the centers – pennies, nickels, and dimes for good luck.

Most delightful of all was Tante’s Hungarian Torte which was made for every special occasion – thin layers of cake made with chopped hazelnuts and put together with whipped heavy cream. Heavenly!

Only three of Tante’s recipes survive – Kupfel, Walnut Kisses and Nut Torte, although I believe my cousin has a yeast coffee cake recipe of Tante’s. These recipes are somewhat sketchy and lacking in detail because Tante just made these delights “by heart.”

The scene at my oven is like a slightly fractured version of Veronica’s Test Kitchen. The counter is strewn with blown-up versions of handwritten recipes, open cook books containing guidance on baking tortes, and stray bread crumbs and hazelnuts. My first version flops badly, because I follow the apparent direction in the original handwritten recipe, and use two spring form pans. The two layers are far too thin and fragile and stick to the bottom of the pan. I toss the results, and I’m almost tempted to head for the bakery and purchase some holiday cookies. But Veronica is my inspiration for constant focus and experimentation. I am determined to get this right. I try to muster all of my pastry training, and focus on the proper techniques for sponge cakes, tortes and flourless cakes. I scrupulously adhere to the methods for whipping egg whites. The following formula is successful:

1) Preheat oven to 350 degrees.
2) Grease only the bottom (not the sides) of a 9.5 inch spring form pan. Cut a circle of parchment, and place it in the pan, and grease the parchment as well.
3) In a stand mixer, beat the eggs yolks on medium-high speed for 10 minutes until eggs are lemon-colored and thick, the consistency of butter. Continue beating and add sugar gradually over the next 10 minutes, until mixture is thick. Beat up to 25 minutes.
4) Mix in the bread crumbs, the finely chopped nuts and the teaspoon of vanilla.
5) Using a clean bowl and beaters beat the egg whites with a pinch of cream of tartar, slowly at first, and then increase speed until stiff peaks form.
6) Fold ¼ of the egg whites into the yolk and nut mixture (it will be quite thick at first). Then gently fold in the remaining egg whites. Pour the batter into the prepared pan, and place it on a baking sheet in the pre-heated oven.
7) Bake approximately 20 to 25 minutes. The torte will creep up the sides of the pan like a sponge cake. Remove when the torte is golden and springs back when touched in the center. After removing the torte from the oven, the center will deflate slightly. Let the torte cool completely in the pan. Use a flat knife or spatula to gently separate the sides of the torte from the pan before releasing the spring form. Remove the parchment.
8) Spread whipped cream sweetened with superfine sugar over the top of the torte and pipe additional cream in a circular rosette pattern. 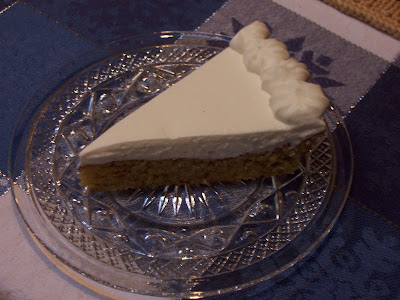 The results are indeed festive. I cut a slice and place it in front of Mom. She takes a bite and smiles. “That’s it. That’s what it tasted like!” We each have two pieces.

Later, when she and Dad prepare to leave, Mom thanks me. “This allowed me to think back on some happy memories.”

And, I hope Tante Kremer is smiling too!

Another recipe with a wonderful history! And how nice that your mother proclaimed it "authentic"! What a wonderful gift to give her -- the gift of the memory of taste. Happy holiday to you, TW.

Wonderful! I love the recipes that get passed down, always the best.

This was truly a labor of love and a lovely gift. You perfected Tante’s Hazelnut Torte! With every delicious morsel my taste buds activated those brain cells involved in recalling happy memories. Thank you so much for the gift of this delightful experience.

I know your Tante is smiling.
Merry christmas y'all!
Sandi

What a lovely story. I like those recipes that get handed down and that you have deciphered Tante Kremer's recipe ... you should start a Test Kitchen yourself ;).
Love the cake stand , by the way.
Merry Christmas , T.W.!

This was an incredible story and recipe to share~I can not tell you how nice it is to read about some of the personal things blogger friends share that are so meaningful to this group of readers~Tante would be so proud , I am sure she is! Your cake was perfect......

Thanks so much, Jann - the torte was really worth the effort, and I could understand why the flavor and memory was so special to my mom.