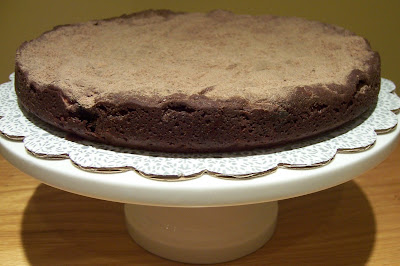 If you plan to serve an 800-year-old Italian confection to guests this holiday season, you may need to take certain precautions. Cut slices thin, serve with a sharp steak knife, and be wary of morsels that fly across the table.

I usually take a couple of samples of my creations into the office, but I’m a little afraid of wrecking my boss’s dental work.

I first learned of Panforte di Siena during a culinary pilgrimage to Tuscany and the medieval city of Siena, Italy in September 2006. The god Hades was in command of the late-summer day. It was hotter than hell, and difficult to find shade in the hilltop city. 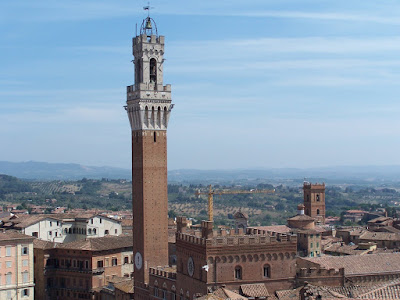 It is said that there is an ancient document preserved in Siena, dated in the year 1205, which records a tax of “bread with pepper and honey” paid to a group of nuns. Panforte translates as “strong bread.” In fact, it uses only a small amount of flour and no leavening agent. There are a number of variations, but honey, strong spices, nuts and dried fruit are the common ingredients. It is incredibly dense, chewy and flavorful.

Those medieval nuns must have had powerful bicuspids. 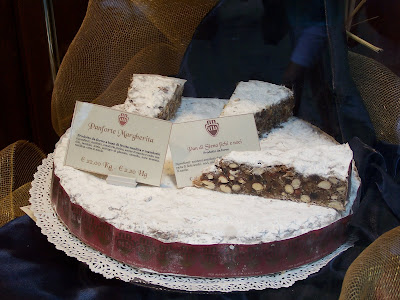 Huge rounds of panforte, studded with hazelnuts grace the windows of bakeries in Sienna. They are captivating to the eye, topped with mounds of powdered sugar and command a high price.

More affordable are the smaller cakes, wrapped in paper, available in most stores and novelty shops, with Panforte Margherita a favorite. 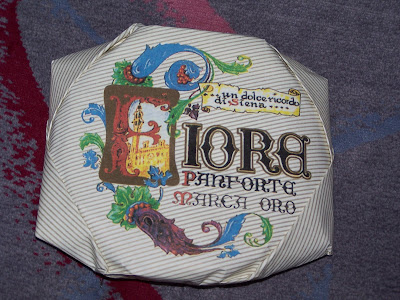 Panforte is one of those cakes that is steeped in legend. Another tale says it was invented around the year 1000, when Siena began to import sugar and spices from the Far East. One story says a nun miraculously devised the recipe and drove away the devil with the heavenly aromas. Another links panforte to a miracle of the Baby Jesus. While it is widely known as a traditional Christmas cake, it is available year round, and it is difficult to track the clear association to the Christmas holidays.

For my re-creation, I choose a recipe for Chocolate Panforte that was devised by the legendary goddess of home keeping. It resembles Panforte Nero, which is flavored with bittersweet chocolate. The preparation involves combining unsweetened chocolate, bittersweet chocolate, whole hazelnuts, dried cherries, flour, cinnamon and brandy with melted honey and brown sugar. The simmering honey melts the chocolate into a thick paste which is spread in a springform pan and dusted with cinnamon and cocoa powder. 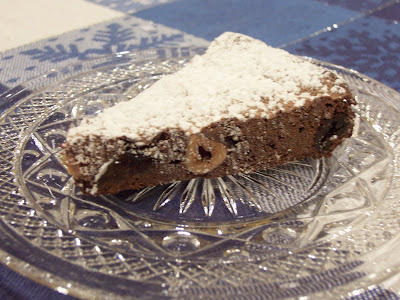 The results are authentic, although the resulting cake could perhaps destroy a medieval fortification. While it does not slice easily, it is decadently dense with flavor, and it tastes subtly rich accompanied with a glass of dry sherry. A thin wedge goes a long way, but you need a powerful knife and fork to cut small bites. It is really quite wonderful, albeit, slightly inconvenient to eat.

I wrap up several slices for the gang at the office. I’m going to advise that they pick up the wedge and eat it with their fingers. The plastic forks in the pantry will never cut it with this medieval masterpiece.

Yours looks great! I'm getting ready to tackle panforte using a recipe from Gina de Palma. Hopefully I'll have some good luck! :-)

I'll probably never make this myself, but I enjoyed reading about it.

TW, this looks absolutely authentic to me, though I'm not quite old enough to remember what the originals might have been like in medieval times. Thanks for another wonderful post.

Stunning! I've always wanted to make Panforte and you have inspired me (as always!!)!

I have read so much about panforte, T.W., that I think I'll end up making some for the holidays - yours looks really good!
I have strong teeth, send some over! :)

I've never heard of Panforte - sounds so interesting specially with that history behind it. I just posted an Italian chocolate dessert too. Guess we are on the same wavelength. :)

Thanks, Andrea - looking forward to seeing what you come up with!

Kathy - I agree that the history of Panforte (and the legends) are pretty fascinating!

Lydia - I'm learning that my Panforte is quite shelf stable, and will probably keep for centuries!

Freya and Patricia - I would now like to try some of the more classic recipes, too. Let me know what you come up with! I'd love to see your results.

Wonderful post. I love this cake. Just use the "dunk" system and it's no longer hard. (we love to dunk things)

This looks like the real thing! One of my favorite treats when I visit IT.....I have never attempted to make it , though....you are brave!