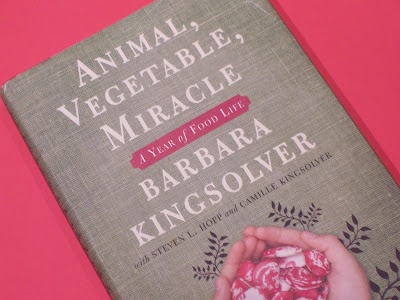 Locally-grown food is all the rage these days. But, beyond a lovely salad or a succulent piece of grass-feed lamb, do you think you could exist for an entire year only on food that you'd grown yourself, or purchased from your neighbors?

Since my neighbor is an electrician, I'd probably starve.

Barbara Kingsolver is the author of a variety of best-selling works of non-fiction and fiction, including The Poisonwood Bible. Her book Animal, Vegetable, Miracle: A Year of Food Life chronicles a family experiment. Kingsolver, her husband and two daughters chose to follow a diet consisting almost exclusively of locally-grown food for an entire year.

Where does your food come from? How much does it cost to get it to your table? How would you handle the challenge of eating locally?

Kingsolver has an edge up on most of us. She lives on a farm in Virginia, located in an agricultural region of Appalachia. In the book, she covers a variety of familiar themes that have gained prominence recently in the press such as industrial faming and the concept of food miles. But unlike Michael Pollan’s The Omnivore’s Dilemma, which at times felt overwhelmingly depressing, Kingsolver manages to weave hope, insight, and practical advice into every chapter. She is thought-provoking and inspiring and sometimes just a wee-bit-preachy, but the food sounds so delicious that it doesn’t really matter much.

The family is able to eat locally with great success, and in some months generates enormous yields. During the summer months they are simply overrun with zucchini. The details of daughter Lily’s home-grown egg business are fascinating, and Kingsolver’s “Vegetannual” – an imaginary plant that sprouts delicate vegetables in the spring and hard-skinned vegetables in autumn is an effective image to reinforce the inherent qualities of seasonal produce. Late in the book, the author does admit to keeping emergency boxes of macaroni & cheese for finicky guests (You go girl!) and while I could have done without the lengthy prose on turkey sex, it does reinforce how deeply involved you can become in the annual rhythms of agriculture. Kingsolver’s descriptions of raising and slaughtering animals for food are sobering but pragmatic. The family plans and strategizes over menus obsessively, and manages to keep freezers stocked with their yields that carry them through the lean winter months. And, they save a boat load of grocery money in the process.

The primary effect of the book is that it does get you thinking hard about food choices, and I am now much more conscious of those tiny labels that identify where my produce was grown. The possibility for change can sometimes seem overwhelming when you stand in the produce aisle and scan the mountains of fruits and vegetables that were shipped from thousands of miles away. Animal, Vegetable, Miracle is less a manifesto, however, and more a handbook for thoughtful food choices. It features a cornucopia of resources woven into the text on sustainable agriculture, food policy, recipes and ways to locate and support farmers markets. There is a companion website which includes a link to an extensive site called Local Harvest. Here I learned there is indeed an organic community supported garden, a sustainable farm, and a restaurant serving local and organic produce not five miles away from my home. So, perhaps the ideal of revolutionizing my diet – even on the primarily urban East Coast – is not that far-fetched.

Just last night, I took note of a report in Time Out New York that a gentleman named Robert LaValva – the co-founder of a nonprofit organization called New Amsterdam Public – is looking to open a public market at the former Fulton Fish Market in New York. The goal is to offer sustainable food sourced from within 500 miles of New York. They’re hosting a prototype event called “Wintermarket” at the South Street Seaport on Sunday, December 16th. We may find that people like Barbara Kingsolver and her family will some day be looked on – not simply as a curiosity – but as pioneers, and their actions may eventually contribute to the fruition of projects like the proposed New Amsterdam Market.

It is possible that one family can foster a miracle.

Posted by T.W. Barritt at Culinary Types at 5:23 PM

What a coincidence. This book is in my stack of things to read right now. I've already been casually checking out what was available here locally and have decided to resurrect my vegetable garden next spring. (It's a little embarrassing to admit this, given that I am so immersed and up to my ears in processed food cookbooks.) The Wintermarekt looks interesting--wish I could attend.

Okay, this book has just moved to the top of my reading pile. I love the idea of a market in NYC, because, let's face it, it is much easier to eat local when you live outside the city, or on a farm, or in a place where you can have a vegetable garden and neighbors who will trade. Providence (RI) is experimenting with a wintermarket this year; I'd love to see that have a permanent indoor home somewhere in the city. (TW, I love the new blog header!)

I do hope that this book gets a wide readership.Locally grown fruit and veg is likely to be fresher, tastier,and nutritionally better.Buying locally also gives customers a chance to ask questions of the farmer and check that animals are well cared for right up to that unavoidable moment of despatch.There's a quality bonus too as stress free animals result in better quality meat. Colette

Kathy - I've been thinking about a vegetable garden as well - although I experience would suggest I don't exactly have a green thumb ...

Lydia - I think you'd really like the book. I'm going to look into Wintermarket further. And thanks for mentioning the new masthead - it was designed by my cousin Stephen Price, a talented graphic artist.

Colette - I'm going to check out more of what's in my area as the seasons progress.

Very interesting book. It really is important to take control of your food choices - what you put in your body. I love eating local too and am pleased that in Richmond, there are some restaurants that are starting this movement.

I hadn't heard of this book and will try to read it this summer. Thanks for the recommendation.