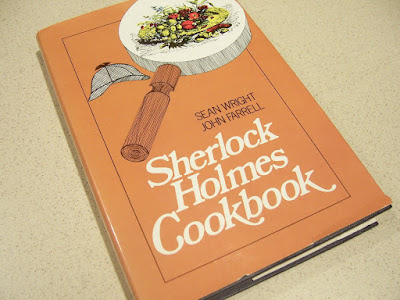 But could the World’s Greatest Detective boil water? Sir Arthur Conan Doyle’s creation, Sherlock Holmes was renowned for his brilliant deductive mind, his cocaine habit and his ever-present chronicler Dr. John Watson, yet food is not the first association one makes with the famous consulting detective. Or is it? Recently uncovered evidence suggests otherwise.

The Sherlock Holmes Cookbook was published in 1976 and written by Sean Wright and John Farrell, two Holmes devotees. The authors assert that food was ever present at Holmes’ and Watson’s flat at 221-B Baker Street in London.

The year 2007 marks the 120th anniversary of the publication of the first Sherlock Holmes adventure. Various celebrations are underway, including the American premiere of the play “The Secret of Sherlock Holmes” at Shakespeare & Company in Lenox, Massachusetts. So it seems a fitting tribute to revisit the Sherlock Holmes Cookbook and explore the cuisine of 1890 London by gaslight.

Part one investigates late-Victorian era dishes, and you’ll find traditional recipes for Bubble and Squeak, Roast Grouse, and Hotch Potch, all delicacies likely to have been consumed by Holmes and Watson. The second-half of the book is comprised of clever menus designed as homage to the most famous, or infamous of Sherlock Holmes’ sixty recorded cases. There are recipes for “Moriarty’s Mulled Cider” (Holmes’ greatest nemesis), “More than Six Napoleons” (“The Adventure of the Six Napoleons”) and “Hellish Hound Punch” (“The Hound of the Baskervilles”).

The authors say that “breakfast is the preeminent Sherlockian meal” and Holmes’ long-suffering housekeeper, Mrs. Hudson would have prided herself on preparing a proper English breakfast for the duo. Indeed, the recipe included for Scotch Woodcock – a dish of scrambled eggs and anchovies – is the ultimate Victorian culinary curiosity, particularly for those of us who are more accustomed to starting our day with a bowl of Cheerios.

Scramble the eggs. Spread toast with anchovy paste and place eggs on top. Criss-cross each piece with 2 anchovy fillets and sprinkle with chopped capers. Serves 2.

To supplement my hearty breakfast of Scotch Woodcock, I’ll indulge in a spot of English Breakfast Tea prepared in my authentic Sherlock Holmes tea pot. 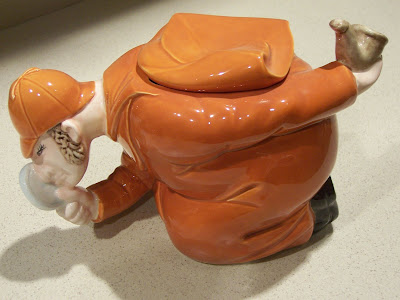 As the great detective would say, “The game is afoot!”

Do you remember Edward X. Delaney, the detective in the Lawrence Sanders books? He was always fixing those great sandwiches. I got lots of sandwich-making ideas from that series.

I assumed that the long-suffering Mrs. Hudson prepared all the meals at 221B Baker Street, but that Holmes must have had a perpetual case of the munchies given his penchant for narcotics! What a fun cookbook.

that is an unusual breakfast but it sounds so yummy. Interesting that there is a Sherlock Holmes cookbook! So now I know what a proper English breakfast is!

Kathy, I have heard of Edward X. Delaney, but have never read the books. Do you have a favorite sandwich?

Lydia - you really made me laugh imagining Mrs. Hudson having to deal with police inspectors, suspected criminals, AND Holmes's frequent attacks of the munchies!

Hi Veron - this recipe sounds just a little fishy to me, but I'm intrigued by it too.

Equally as enjoyable is the Sherlock Holmes Cookbook by Julia Rosenblatt and Fritz Sonnenschmidt, former Dean of the Culinary Institute of America. The two used to host some major Sherlockian feasts at the CIA every 5 years. I'm sorry to say I missed the final one.

Scott, thanks for visiting. I have enjoyed reading your Baker Street blog, and have been a fan of the great detective since I was a teenager.

That teapot is priceless!

Hi Brilynn - I bought that teapot a long time ago at a tea shop in London. It is quite a prize to me!