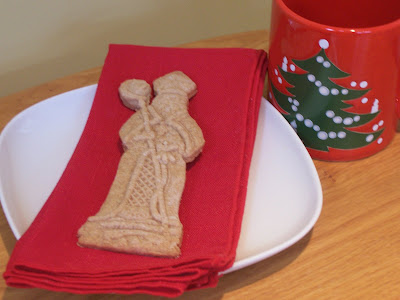 Who is Saint Nicholas, and why is he handing out gifts on December 6th? Doesn’t he know that Christmas is December 25th?

And what about that thing he’s got for wooden shoes?

While it might be easy to assume that the image of jolly old Saint Nick was invented, or at least perpetuated by the Coca-Cola Company, the origins of the miraculous giver of gifts reach back to Europe and the Netherlands in the Middle Ages.

The real-life Saint Nicholas was born in Asia Minor and lived in the late third and fourth centuries. He was renowned for his generosity and is given credit for many good deeds, including saving three penniless sisters from a life of prostitution and rescuing a group of young travelers from an evil innkeeper. He is also the patron saint of seafarers. Over time, the generosity and charitable deeds attributed to Saint Nicholas evolved into a tradition of gift-giving, one that continues to this day in the Netherlands.

Here in the New York area, there is a distinctly Dutch influence. One can find fanciful windmills on Long Island where the Dutch settled and during December, Saint Nicholas Day traditions are recreated at several historic Dutch homes in the Hudson Valley. Dutch immigrants brought the customs of Saint Nicholas to the New World, but eventually Saint Nicholas got a makeover and became the roly-poly man in the red suit with the massive publicity machine that we now know as Santa Claus.

The feast day for the original Saint Nicholas is still celebrated on December 6th in the Netherlands. On the night of December 5th, Saint Nicholas visits homes and leaves gifts of fruit, nuts and cookies for good children. Dutch youngsters leave wooden shoes by the fireplace as a receptacle for these gifts.

Speculaas is a Dutch almond spice butter cookie that marks the arrival of Saint Nicholas Day in the Netherlands and heralds the start of the holiday season. My search for the origins of Saint Nicholas takes me to a website which details his story. There I learn that speculaas is often shaped before baking using traditional hand-carved wooden molds that depict the image of Saint Nicholas. For the past 25 years, Illinois-based wood carver Gene Wilson has perfected the art of hand-carved cookie molds from beech and cherry hardwoods. I purchase two “deep cavity speculaas molds” depicting Saint Nicholas for my yuletide baking. 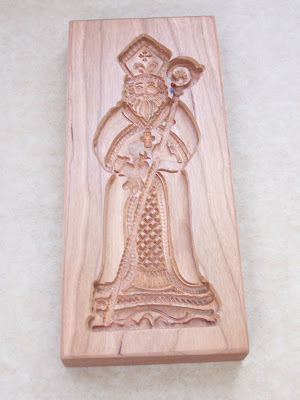 The recipe for speculaas is simple and fragrantly-spiced cookie dough that is reminiscent of gingerbread. I can’t resist a nibble here and there of the buttery cookie dough, as I bake:

I’m submitting this recipe to Susan “The Food Blogga” who is hosting “Eat Christmas Cookies” this month, the biggest holiday cookie swap the blogosphere has ever seen! 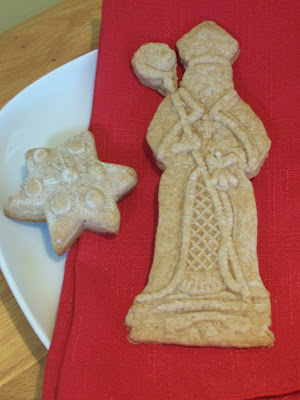 My Dutch speculaas cookies are ready to enjoy with a spot of tea for Saint Nicholas Day, but there are other ways to honor the ancient saint of charitable good deeds and generosity. A spontaneous donation to a favorite charity would be a great way to keep the legend of Saint Nicholas alive.

Posted by T.W. Barritt at Culinary Types at 5:56 PM

First I find out there isn't a real Santa Claus. Then I find out Saint Nick isn't from Coca-Cola?

Thanks for the unique and beautiful submission, T.W. I loved your historical perspective as well. Your Dutch Speculaas Cookies will be a lovely addition to Eat Christmas Cookies. -Susan

One year we visited friends in Amsterdam for a week that included St. Nicholas Day, and we learned of another tradition -- the tradition of exchanging small gifts, each one accompanied by a humorous poem! The poems would get funnier with each round of gift-giving. I wish we'd exchanged these cookies, instead -- much less pressure than being a funny poet!

What a beautiful mold! I learned about a new cookie today. You always make it so interesting--Thanks!

Is the powdered sugar necessary to make sure that the dough comes out of the mold without breaking or do you think you could omit it?

Hi Susan - actually, St. Nick is really from Macys! Thanks to you for hosting such a great holiday cookie event.

Lydia - I wish I'd known about the poem tradition. I would have written the post in rhyming couplets!

Thanks, Kathy. This was a new tradition to me, but it's got quite a lot of history attached.

Elizabeth - thanks for visiting! The powdered sugar is used to release the dough from the mold, but I have read that people have used a dusting of flour or even rice flour. The crevices in the mold are quite deep.

Oh now I thought Santa was Kris Kringle :). Your cookies look spectacular T.W. , puts you in the spirit of the season!

Hi Patricia - Thank you so much! It helps that the molds are such works of art!

Nice to see some Dutch history in the foodblogging scene ;)
Lovely speculaas mould. It's much nicer than the ones I have (which I still have to use for the first time)

Linda - Thanks for visiting! It's so nice to hear from someone in the Netherlands. I enjoyed reading about Sinterklaas on your blog, but had trouble leaving a comment for some reason. Your meringue cookies looked wonderful!

Hi, it is interesting to read how people celebrate the day of Sint Nicolaas in the States. I would like to add that there is another tradition which goes with it: you also can prepare the so-called "pepernoten". They are made from almost the same dough as speculaas. But instead that you make cookies from it, you roll marble-like round balls from it, the size of a hazelnut. When baked, they are called pepernoten, which are scattered around in the room by Zwarte Piet, the black helper of St. Nicolaas.
Greetings from the Netherlands, and merry christmas!!

Thanks for visiting, and sharing the "pepernoten" tradition. I have read about Zwarte Piet, and would like to give those cookies a try as well. Merry Christmas!

Thanks! I appreciate the information you've researched and share.

We found a gorgeous, wooden speculaas cookie mold at a church Christmas bazaar for 50 cents! My husband's mom was born in the Netherlands, so finding the mold was a treat!

I love the Saint Nicholas website you found. Thanks!

Anna - Many thanks for visiting! I would love to find more speculaas molds, especially at that price! Best wishes for a Merry Christmas!

Living in Europe has many advantages, including access to Christmas markets, where you can buy all sorts of wonderful Spekulaas moulds. Thank you for sharing the recipe, and the clue to try powdered sugar; I have been trying flour without much luck previously, next time I will give the sugar a go.

What a beautiful mould, you have there! I'm Dutch and I have never used a speculaas mould before.
I have a small tip for you: the longer you leave your spiced dough the better the taste gets, leaving it overnight in the fridge, is the best.
grtz. Linda