A Tale of Two Puddings - Moulds and Ingredients 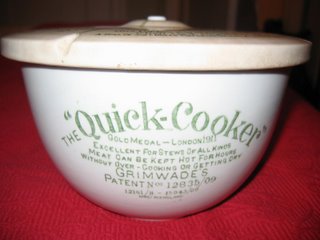 No sooner have Jill in Ottawa and I decided to concoct Christmas puddings in two different countries, when our plans hit a snag. We’ve already missed the traditional deadline for preparing a plum pudding. Jill writes:

Most sources I've looked at say that Stir-up Sunday is the Sunday before Advent, and since Advent starts on December 3 this year, I think Stir-up Sunday was actually yesterday. Hopefully our puddings won't be cursed by the break with tradition.

This could be disastrous. It’s like moving Abraham Lincoln’s birthday to the third Monday in February or celebrating Christmas on the 30th of December. But, I take a deep breath, say three “Hail Julia Childs” and hope for the best.

Meantime, Jill’s been gathering information on her antique crock:

I've done a little investigating into my pudding mould, which, while my mother and grandmother used it for plum pudding, is actually a Grimwade's "Quick-Cooker,”, "excellent for stews of all kinds" (according to the print on the outside of the bowl). I did a little looking around on the Internet, and the Quick Cooker appears to have been a very popular item in the first half of the 1900s. It is not particularly rare or valuable - there are lots on e-Bay - but it is a really wonderful vintage piece. On the top of the lid, there is green printing that provides instructions on how to use it, and the underside of the lid has advertising for other Grimwade items, all of which were"thoroughly hygienic" and "designed to keep out flies". Inside the bowl there are instructions on how high to fill it. On mine, it looks like the printer made a mistake, crossing out some words and rewriting them below, which is a feature I particularly like.

Jill has even traced her Quick Cooker back to Merry Olde England and finds a citation through the London Museum where a crock dated 1911 is exhibited. I’m a little jealous. Aside from its Williams-Sonoma pedigree, my tin mould is a thoroughly modern reproduction and has zero historic value.

I decide to focus on gathering my ingredients. I get an early train to Long Island one evening and head for the local Waldbaum’s grocery. It is still November but the holiday pickings are a bit slim. I find raisins, currants and brown sugar, but there is only one container of candied citron left. Is homemade IN this year? I’m surrounded by shelves of ready-to-use mincemeat and prepared pies that are untouched. Dickens would have found modern day grocery stores to be maddening …

The suet in my recipe presents a problem. I’ve got a business trip at the end of the week, and the recipe states that suet from a grocery store will not suffice. It is only for feeding the birds. So unless I want bird seed in my pudding, I need an alternate plan. I enlist Mom to make the purchase at a local butcher shop while I’m away, but I am slightly perturbed when my Dad asks, in fierce grocery store loyalty, “What’s a butcher shop?”

Jill, meanwhile, is getting closer to selecting a recipe for Stir-up Sunday, or what is now our collective celebration of the day:

Since you're going the traditional route with suet, maybe I'll try a modernized version with butter. I have read that suet makes a less heavy pudding. There are so many different recipes I'm almost tempted to make more than one pudding, but I know that my family likely won't even get through one. And after all, the pudding is really just a vehicle to deliver hard sauce...

I’ve heard that Canadians are quite practical.

Next: Choosing the Recipes