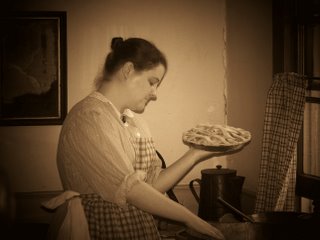 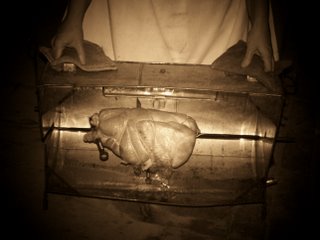 It is an escape in time. I leave behind the pressures of the week and walk straight into the past of Long Island, circa 1863, for a glimpse at the culinary preparations for Thanksgiving.

I pass through the plate glass doors of the reception center at Old Bethpage Village Restoration, and I suddenly standing alone on a winding country road. There are pinkish-gray clouds in the sky, a slight chill in the air and many of the leaves have fallen.

In the Henry R. Williams House (c. 1830) a woman dressed in blue gingham is roasting a turkey in a metal reflector oven. The poultry sizzles as it absorbs the heat from the open hearth. The woman is watching several black cast-iron Dutch ovens which are tucked in close to the flame, with mounds of hot ash on top. In one, a chunky soup is bubbling and another holds an aromatic golden corn bread.

I walk along the dirt road to the Richard S. Powell Farm (c.1855) which sits aside a small creek. Several large cows roam in an adjacent pasture. Inside the kitchen, two women are stoking the brick oven in preparation for a day of baking. They are peeling apples and mixing gingerbread dough, and they work from a hand-written notebook where original recipes have been copied from the personal diaries of women from the period. When the bricks of the oven floor are hot enough, they will bake a week’s worth of fruit pies and cakes.

Inside the Ritch House (c. 1830) a woman with steely gray hair tucked into a white cap is tending to pots of ruby-red cranberry sauce and butter beans, simmering over an open hearth. She tells me that in the year 1863, President Abraham Lincoln – at the urging of a women’s magazine editor named Sarah Hale – set aside the last Thursday of November as a national day of Thanksgiving. Later in the day, she will add brown sugar, molasses and bacon to the beans and bake them overnight in the kitchen’s brick oven.

There is a small kitchen tucked in the back of the John M. Layton General Store and House (c. 1866). Several women are at work adding logs to a wood burning stove and preparing baked goods. They have grated all their own spices. One woman puts the finishing touches on an apple pie lattice crust, and another presses a round cooking cutter into russet gingerbread dough. The glowing embers of the wood fire heats the flat cast-iron burners of the stove and the deep oven where succotash steams and additional pies are baking.

Inside the Noon Inn (c. 1850), the merry tunes of a fiddle player accompany the preparations throughout the village and signal that the Thanksgiving holiday is fast approaching.