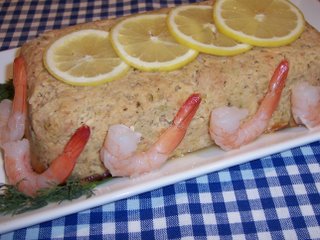 Somewhere Beyond the Sea:

I am somewhat tentative as I approach Sunday Supper this evening. Over at “Baking and Books,” Ari is churning up delicious homemade coconut ice cream. On duty in her "Test Kitchen," Veronica is exploring the art of white truffles and risotto.

Me? I’m about to prepare “Fish Loaf” from page 106 of the 75th Anniversary Edition of “Joy of Cooking.” While my colleagues are investigating new culinary frontiers, I’m wallowing in comfort food. I’m hoping my reputation doesn’t suffer much. This recipe uses pouch tuna. Shocking!

With the hopes of salvaging my culinary self-respect, I set out in search of more information about a dish that probably has the most unimaginative, least appealing name ever created in the history of food.

Frankly, I’d never heard of Fish Loaf. We were all about Meat Loaf growing up in suburban Long Island, and rarely did anyone stray from the standard menu items or ingredients. Nobody wants to be a fish out of water in the suburbs.

So, I take a deep dive into the virtual world and make a few interesting discoveries. I find a recipe for Gefilte Fish Loaf, which is often made for Passover. It is low in fat and low in calories. There are numerous Salmon Loaf recipes attempting to swim upstream, and I learn that in the Italian town of San Remo on the Mediterranean, one can find a dish called “Pan Pesce.” Short of the fancy name, and a touch of European cache, the ingredients are almost identical to the recipe I have in hand. I even find a few versions of a Caribbean-style fish loaf. And, of course, one can’t miss the potential culinary connection to crab cakes, although most of us consider them to be far more upscale. No matter the culture or region of the world, all of the recipes I uncover involve flaked fish, chopped aromatic vegetables, egg, bread crumbs and seasonings.

Yet, I am just at the start of my journey to the bottom of the sea. I gather the ingredients and begin the preparation. The elements are simple: albacore tuna, bread crumbs, chopped celery and onion, egg, lemon juice, red pepper sauce and basil. I combine it all in a food processor, so the preparation couldn’t be easier. Then, I press it into a loaf pan. When all the ingredients are combined it smells suspiciously like a fresh tuna salad sandwich, and as it bakes and that salty smell of the sea fills the air, I am flashing back to the tuna casseroles of my youth.

So, is Fish Loaf seaworthy, you may ask? I whip up the recommended side of Horseradish Cream – which is foreshadowed in some of the Gefilte Fish recipes – and is basically whipped cream infused with sharp horseradish and tangy lemon juice. What could be better than that? I garnish the loaf with paper-thin lemon slices, dill, and a few shrimp because every chef must add his own creative flair. It’s starting to look like something that might be served at the Coney Island Mermaid Parade. The taste is comforting, but actually somewhat mild, bordering on the bland. The loaf doesn’t hold its shape for very long and rapidly dissolves into a kind of seafood hash. But, add a dollop of that Horseradish Cream and the tides shift. When that razor-sharp horseradish and sweet fluffy cream collides with the briny tuna, get ready for a tidal wave of flavor.

My suggestion is this. When they re-issue the 80th Anniversary Edition of the “Joy of Cooking” they should rename this dish “Neptune’s Fantasy.” It will get far more respect that way.

Hey, there's nothing wrong with comfort food especially with the weather getting cold. Your fish loaf reminds me of something I had in my youth, I think it's like fish cake patties...not sure how my grandma made it but it sure was good!

Wallowing in comfort food sounds like a most excellent way to spend ones time in the kitchen. :)

There are days when all we need is a nice plate/bowl of comfort food - it certainly cheers us up in a heart beat!

Welcome, Patricia! Thanks for stopping by!