A Tale of Two Puddings - The Idea 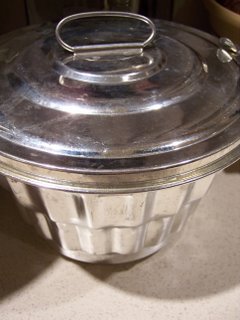 Okay, maybe things weren’t so bad, but I’d spent a good portion of the week traveling and the food had been terrible. I am in need of a good culinary challenge served with a healthy dollop of holiday spirit.

An e-mail from Ottawa, Canada delivers the holiday spirit – 80 proof – and a bit of inspiration to invigorate the Christmas season.

Jill and I first cooked together – and in the spirit of full disclosure, drank a lot of really good French wine – in Burgundy, France at the La Varenne Culinary School in September. In fact, the school now uses a photo of the two of us pounding the heck out of a stack of veal cutlets as part of its series of e-mail promotions.

Her note gets me thinking. Jill writes:

Last weekend my mother gave me my grandmother's old earthenware plum pudding mould. We usually have plum pudding at Christmas dinner, but I've never made it so I am quite excited about the prospect. I have been reading about the customs of making plum pudding. Tradition has it that puddings are made on or immediately after the Sunday "next before Advent,” i.e., five weeks before Christmas, commonly known as "Stir-up Sunday.” Apparently, each member of the household is supposed to stir the batter and make a wish. Since I'm not sure how adept my cat Polly will be at stirring (or making wishes) I may have to enlist a few friends as honourary members of my household for the event. Of course there are hundreds of recipe variations, so I'm trying to find the most appealing (to me) ingredients.

I am immediately captivated with visions of sugar plums, Dickensian Christmases and Ghosts of Christmas Past. I’ve never made a plum pudding either, even though I’d bought a tin pudding mold years ago and never used it. It would be the perfect holiday project. And, think of the fun it would be to serve an incredibly boozy holiday confection to the family during the Christmas season. We could each make a plum pudding and compare notes – plum pudding by two different chefs in two different cities. Jill agrees and we set off on a cross-continental Christmas culinary adventure. I mark my calendar for “Stir-Up Sunday” (or so I think) and start planning.

I pour over the holiday cookbooks in my burgeoning collection – The Frugal Gourmet Celebrates Christmas, The Martha Stewart Living Christmas Cookbook, and many others, but the most authentic recipe seems to be in the Joy of Cooking 75th Anniversary Edition. The recipe advises that patience is required. The pudding steams for six or seven hours. That’s commitment. I imagine a stress-free day of tending the pudding, writing holiday cards, listening to music and inhaling the aromas of fragrant fruits, caramelized sugar, brandy and cream sherry.

But, before we can each partake in a Merry Christmas and a glorious flaming plum pudding finale, Jill and I both have many preparations to attend to.

Next: Pudding Molds and Ingredients