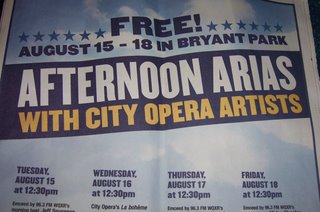 Opera Alfresco: I’ve logged eight thousand miles this week in business travel, so when the lunch whistle blows, I am in desperate need of an escape from the office. At exactly 12:23 p.m., I lock down the computer screen and walk briskly down Sixth Avenue to Bryant Park, for “Afternoon Arias with City Opera Artists.”

Despite years in Manhattan, I’ve spent little time in Bryant Park (http://www.bryantpark.org/). The history is fascinating. George Washington’s troops crossed the site of the park in 1776 as they fled the Battle of Long Island, and Union troops held drills there during the Civil War. In 1853, New York hosted its first “world’s fair” on the site in a building called the Crystal Palace, which stood there until it burned down in 1858.

Today, Bryant Park looks like a Georges Seurat painting. There are picnickers camped out on blankets, children frolicking on the grass, and well-heeled executives wandering the perimeter. There are even one or two grand dames with parasol in hand.

At the West end of the lawn, a large stage is set where WQXR evening host, Midge Woolsey is presiding over a lunchtime performance of City Opera artists. As I stand at the edge of the lawn drinking in the production I learn from the commentary that City Opera was founded by Mayor LaGuardia as the opera for the people. So, free performances in the park are a natural. The voices of the performers soar into the sky with the birds, with selections from La Boheme, Carmen and even a lively rendition of “Poor Wandering One” from The Pirates of Penzance.

Regardless of the hefty serving of culture, I am starving, and it’s a prime opportunity to sample the fare at ‘wichcraft, one of three olive-colored pavilions that serve sandwiches, coffee, pastry and ice cream in Bryant Park (http://www.wichcraftnyc.com/). New York Magazine recently profiled ‘wichcraft as one of its 101 Best Cheap Eats in New York. I join the queue and place an order with one of the orange-clad employees for chicken salad, walnuts, roasted tomatoes, pickled red onions, and frisee on multigrain bread, perhaps the longest list of ingredients and condiments for a single sandwich, ever.

I find a spot to stand on the North end of the lawn and munch on my sandwich. I listen as the passion flares on stage and I rapidly develop a tragic love affair with my sandwich which is vanishing quickly. The flavorful chicken takes center stage, the roasted tomatoes add a subtle dramatic note and the frisee a touch of comic relief, all surrounded by the artistry of artisanal multi-grain bread.

For the finale, I harmonize with a chocolate cupcake with cream filling, which evokes memories of the classic Hostess Cupcake. It is Devil’s Food Chocolate, to be exact. How appropriate, as the Devil has just possessed the stage for a classic scene from Faust, that concludes the Afternoon Arias.