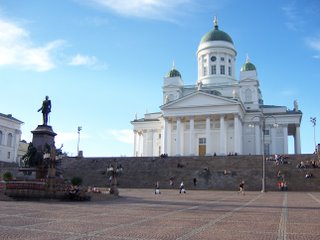 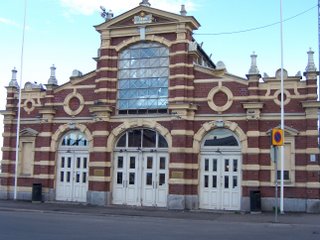 Culinary Dispatch - Helsinki, Finland: One body should not be in so many time zones in so short a period of time, but here I am playing "Beat the Body Clock" on business in Northern Europe.

I have settled in Helsinki for a couple of days of work. On day one, after an overnight flight, arrival and meetings, I am over caffeinated and in desperate need of fresh air. So I set off by food from the hotel to find the Historic Centre of Helsinki. While I can not pronounce the name of a single street, the map serves me well, and soon I am standing on the edge of the massive, sun-drenched Senate Square, the home to Helsinki Cathedral built in 1852 (top photo). (It is here I must point out that the only time I seem to be directionally challenged is when I am traveling with my colleague, Splint McCullough.)

I learn a few historic facts while on foot. Helsinki was founded in 1550 at the mouth of the Vantaa River but moved to its current location in the mid-17th century. Russia conquered Finland in 1809, and its influence can be seen in much of the city. Finland became independent in 1917 with Helsinki as its capital.

It is a fine summer evening with a gentle, warm breeze moving off the ocean. There are wisps of pearly gray clouds in the sky. The city is comprised of a series of small hills, and many of the public areas are paved with coral-colored brick. Residents are physically fit, with joggers and bikers everywhere. As I walk along Esplanade Park, I pick up the sounds of an outdoor band playing music by ABBA. Seagulls are perched in various spots observing the rhythms of the city in a detached manner. Cafe patrons sit facing the street with a similar detachment.

Naturally, I am drawn to the food lore of the city. I stop briefly at Old Market Hall (bottom photo) a haven for food enthusiasts since 1889. Today it houses bakeries, butchers, delis and specialty shops. Later, I pass the Kappeli Restaurant on Esplanade Park, built in the 1860's near a spot where herdsmen would sell milk in market stalls. The word Kappeli actually refers to the term herdsman or pastor's stall or chapel.

At dinner, I sample a local dish indigenous to the agricultural region of Lapland, Bread Cheese and Cloudberry Jam, or Leipajuostoa Ja Lakkahilloa in the native tongue. The bread cheese is a wedge of dense, farm cheese, much like bread, and similar in consistency to cheese cake. It is accompanied by a selection of rich, savory rye breads and topped with a large dollop of cloudberry jam, a sweet, honey-colored paste flecked with crunchy amber seeds. Cloudberries are in season in June and July. The sweetness of the jam marries beautifully with the tart and acidic flavor of the cheese.

In Finland, the phrase is not bon apetite, rather, it is hyvaa ruokahalua!

Meanwhile, it is well after 9:00 p.m. and the sun shows no sign of setting.

Email ThisBlogThis!Share to TwitterShare to FacebookShare to Pinterest
Labels: Food on the Road