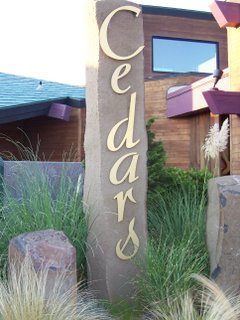 Culinary Dispatch – Kennewick, Washington: Splint McCullough and I have finally made it to the Pacific Northwest. There’s not much further you can go. We have landed in what is locally referred to as “The Tri-Cities” which includes Kennewick, Pasco and Richland, Washington. A quick look through the phone book and I manage to pick up some local lore. The Tri-Cities actually enjoy “nearly 200 sun-filled days a year.” The Columbia River runs through it. Lewis and Clark set up camp in Pasco in 1805. There’s a booming wine region. And, on a slightly more explosive note, nearby Hanford was the site of the top secret Manhattan Project, which produced plutonium for the atomic bomb, used in World War II. Who knew?

Splint and I have traveled to the four corners of the Tri-Cities. In less than 24 hours we’ve gotten lost no less than three times. They don’t seem to have much use for street signs here. This morning, we were off among the tumbleweeds, when we should have been kicking off a meeting, and this evening, we found ourselves on the wrong side of the tracks near a Burger King and a Rite Aid, when we were looking for a seafood restaurant on the banks of the Columbia River.

Our search for dinner starts inauspiciously. Anthony’s, a seafood place recommended by a gentleman on our incoming flight had a small fire in the morning and they are closed. The young woman who turns us away hungry suggests we try Cedars, so we hop in the rental and try to make sense of her sketchy directions.

Several wrong turns later, I give up on maps, revert to instinct and decide that a seafood restaurant must be near water. We follow the sign to “Marina” and Cedars appears on the horizon. Splint dubs me the new Magellan.

Cedars has a handsome exterior that is covered with, you guessed it, cedar shingles. There’s a spacious outdoor deck which flanks the Columbia. Inside are wood beams, rafters, and potted ferns. We opt for indoor seating and kick off the meal with a glass of Preston Sauvignon Blanc 2004 bottled in Pasco, Washington. It’s our first taste of the local vintage and it’s surprisingly good. The Sauvignon Blanc is free of the grassier notes found in the New Zealand variety. It’s clean, Green Apple crisp and smooth, with just a hint of American Oak.

Splint selects the salad bar, which he dubs “cafeteria basic.” I do better with the clam chowder which is thick and stew-like with big chunks of clam and a splash of sherry. We split the Mesquite Smoked Rainbow Trout and Cheese appetizer. It’s a do-it-yourself sandwich. You take a crostini and layer cream cheese with parmesan, capers, a dash of fresh lemon juice and top with a slice of rich and mellow smoky rainbow trout. The combination of flavors is sublime.

Our entrees are less inspired. I try the King Salmon with lemon, butter caper sauce. It is serviceable, but I’m a bit capered-out at this point, and the sauce seems a tad oily. Splint pronounces his Mahi Mahi to be dry and the tropical fruit salsa bland. However, he gives an enthusiastic thumbs-up to his baked potato with everything on it. According to Splint, the medley of bacon and chives is far more interesting than the medley of fruit and salsa.

While the main entrees are routine, they are more than filling so dessert is skipped. The salmon-pink sunset over the Columbia River is a far better end to the meal for a couple of hard-core New Yorkers with no sense of direction. Check out Cedars at www.cedarsrest.com

Email ThisBlogThis!Share to TwitterShare to FacebookShare to Pinterest
Labels: Dining with Splint McCullough, Food on the Road