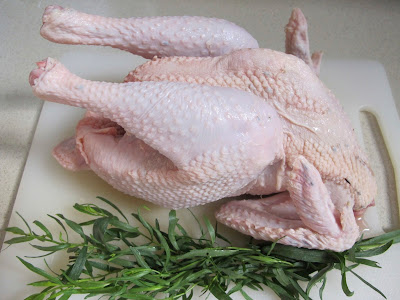 When I was in elementary school, we exercised in gym class to a 45 rpm vinyl record (I’m dating myself.  It was life before CDs and iPods) called "The Chicken Fat Song."

It was a snappy workout tune written by Meredith Wilson and sung by “Music Man” actor Robert Preston.   The record was sent to hundreds of U.S. schools as part of a youth fitness initiative launched during President Kennedy's administration.   Preston shouted out moves like Touch down every morning – ten times! followed by the refrain Go you chicken fat, go away! Go you chicken fat go!   Now, some years later I still can’t that song out of my head.

I was reminded of that catchy tune when my first heritage chicken was recently harvested at Restoration Farm.   Long and lean, the chicken is physically different than your average supermarket variety and there's almost no chicken fat at all.   I could almost hear Robert Preston’s bellowing voice in the kitchen singing, Go you chicken fat go! as I cleaned and trussed the bird. 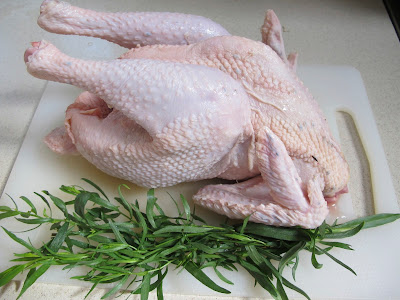 In fact, the chicken fat was chased away in the fields of Restoration Farm.   The 2012 heritage meat birds are male free-range chickens that exercise and forage in the field.  They are breeds that once were more commonly raised, and need to be preserved – breeds that include Delaware, White Orpingtons, New Hampshires and Speckled Sussex.  They develop sleek, athletic bodies, quite unlike last season’s mostly grain-fed Cornish broilers bred to quickly put on the pounds.  They take longer to mature – up to twelve weeks versus the quick six-week maturation of a Cornish broiler.   The diet and activity of these heritage breeds is said to result in a more healthful and flavorful bird.

One must do a bit of reading before cooking a heritage chicken.   The slim bird must be cooked at a lower temperature to assure a moist and tender breast.   At typical cooking temperatures for chicken, one could easily cook that farm fresh flavor right out of a heritage meat bird.

I go straight to the master, Julia Child, and select a recipe from "Mastering the Art of French Cooking" called Casserole Roasted Chicken with Tarragon.  Julia’s technique of searing the bird, and then roasting it in a covered Dutch oven at a lower temperature of 325 degrees -- with lots of tarragon from the farm -- keeps the chicken moist and juicy and perfumed with the flavor of the herbs. 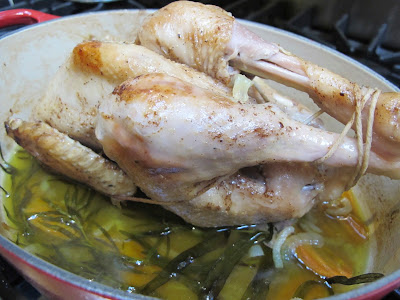 Did I notice a difference with my first fresh heritage chicken?   There is less meat, but the flesh did have a richness to it.  It was pronounced delicious by those who consumed it, but I'm not sure I would be able to taste a noticeable difference in a side-by-side comparison with a supermarket chicken.   I hate to admit that it felt a little less-than-bountiful simply due to the size.  It is funny that our society will look down on one who is pleasantly plump, but celebrate thinness in humans, yet when it comes to a chicken we feel a little deprived if the bird is not zaftig. 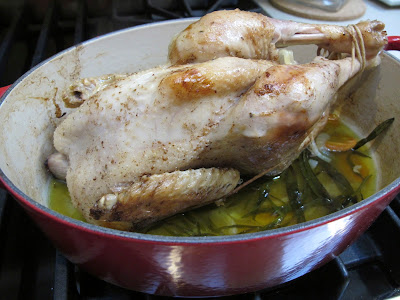 Maybe there was a different reason to eat this bird -- a reason that had less to do with chicken fat and plump breasts and more to do with how the chicken was raised.   It is really about a better convergence of farming practices and palette.  Head growers Dan and Caroline believe that chickens can be incorporated into the farm and lead a healthier life prior to harvest.  I was there on the day in February when the birds were first delivered and placed in the brooder. 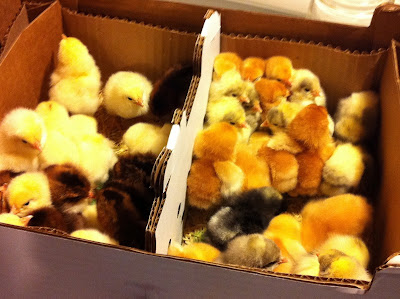 The heritage birds truly traversed Restoration Farm in a large open pen.   They consumed grass and flowers and exercised their limbs and became part of the life cycle of the farm. 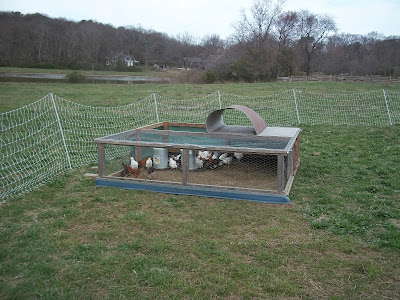 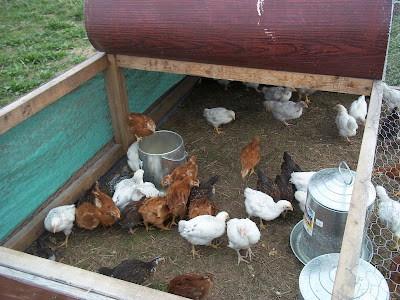 The careful tending continued in the kitchen with the choice of recipe, and the stories told about this bird at the table.  The entire process was all more thoughtful and involved than a supermarket purchase. 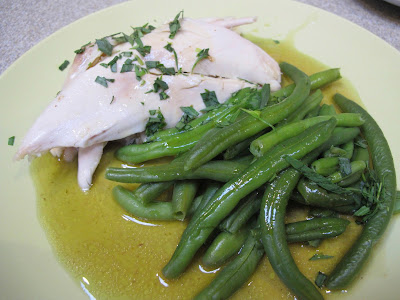 Perhaps cooking a heritage chicken is not about filling the belly, but about supporting the cycle of community agriculture and being filled with the total experience, from farm to table.

Wow, so much to learn about chickens. I had no idea they were slimmer and had less fat. You are so right, we like fat chickens. But when it comes to vegetables as an example, we're supposed to covet the small ones. Go figure.

Loved that you've used tarragon with your roasted chicken. It's one of my very favorite herbs.
Sam

For many decades I managed to sublimate Go Chicken Fat, Go. Now you have planted it in my brain again. Sigh. But I do know what you mean about feeling less than satisfied, in some way, with heritage birds. Several years ago I spent a ridiculous amount of money for a heritage turkey for Thanksgiving, and my guests really didn't like it. We have become accustomed to something much less flavorful.

I am totally with you on those birds and their culture. Chickens are an awesome natural pesticide and fertilizer. They walk through the field, fertilizing and eating all the bugs. It's a perfect synergy that makes for better taste and healthier for the bird and you (they are high in omega 3's when they aren't only on a grain diet). Your chicken looks delish. If I may say, an Italian friend spatchcocks and grills their birds under a brick... works like a charm on a lean, natural. bird.

Heard a snippet of that Chicken Fat song on a podcast last year and wondered from whence it came. Thanks for ....enlightening me.

I exercised to the Chicken Fat song and then led the exercises as a teacher to the same song. So how's that for dating myself.

I haven't eaten or cooked heritage chicken, but yours looks good!

It's a skinny chicken for certain, but cooked a la Julia, full of flavor. Will you try Deana's friend's method? Would be interesting to see how it turns out.

We have a couple that raises chickens here in a similar fashion. My BIL bought a chicken from them at our Saturday farmer's market and split and grilled it over the weekend. His experience was similar to yours in taste and had almost no fat on it at all. But his was tough. We're trying to figure out the best way to cook a leaner bird. Any ideas on how or what you would do differently next time. Or will there be a next time after reading Lydia's comment.
Sam

I do remember doing gym exercises to a record player, not sure what music though.
I don't have "free range" chicken options, but I do buy the "skinnier" chickens. I just don't like all the fat on the 5 or 6 pound ones. Your cooked chicken looks delicious.

I was seriously considering splitting and grilling the chicken on the next go-around. I'll be getting two more this season. It seemed like that even layer of heat might work, and I was thinking about basting the bird with the mustard glaze that Sam used in a recent recipe.

This post reminds me of an encounter I had last weekend in a small village in the mountain with a peasant woman and her husband who was tending 2 goats; I started to talk to her and she told me about her life, 9 children all raised and gone to the city and her sheep that she had just slaughtered; she said " I raised him myself and his meat was so sweet!, city people don't know how sweet meat can be when you have raised the animal yourself". I spent the day wondering if I should feel horrified or if I am missing the point; later on that week, friends offered their explanation as to why it is normal to like the meat of an animal one has raised, as in "at least you know it did not get fed junk or hormones". that sort of thing; sorry i got off topic; chicken is great with tarragon, my grandmother used to insert the tarragon under the skin with her finger. very flavorful.

So, is this song something we should all add to our workout playlists??

Thanks for the lesson on chickens - who knew the size of a bird could make such a difference?!

Dear T.W., That certainly is a skinny chicken!! I am sure it was flavorful with the wonderful way you prepared it.
Blessings friend. Catherine

I know we all try to eat healthy but maybe a little butter with some herbs under the skin when you split and grill it.

Such a lovely whole chicken dish!

I have never made a whole chicken dish at home though! You can't buy whole skinned chickens over here, just roasted on a fire. I don't know how to do that at home? !

Thanks for sharing your lovely post & pictures too, my friend! :)

It's fascinating to see how the heritage birds are raised. These birds are long and lean and speak of yesteryear. They look more like goose than chicken. I'm glad to hear they are flavorful. Have a wonderful weekend. Blessings...Mary

I'm not sure if I still have them but, I once had a few books around here about raising poultry. The books were probably from the 30s or 40s, I'm not sure. Anyway, I seem to remember specific directions for preparing them by size. I'm thinking perhaps if these chickens were a bit older, especially since as you say, they meandered through their meals daily, perhaps, the flavor develops with age.

My fascination with chickens has been rekindled by this post T.W. and I thoroughly enjoyed it. Lean and delicious I would say:) I'm going to have to spend some time looking for those booklets. If I find them, I'll send them your way if you want!!!

I was pleasantly surprised when I arrived in Pennsylvania to find abundant access to farm raised heritage breed chicken. Admittedly there is less meat, but the flavors! Oh the flavors! With an overnight brine the chicken-y chicken makes it such that one can never return to the industrial raised ones.