The Woman Who Revived a Forgotten Food Writer 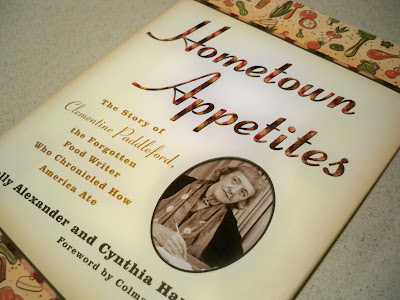 Clementine Paddleford. Her name sounds like something out of a Rogers and Hammerstein musical, but she was perhaps the most famous food writer of her day. And, when she died in 1967, Clementine Paddleford’s distinctive name and voice all but vanished from the annals of food history. Until now.

I first spot Paddleford’s intriguing moniker in a recent Gourmet article about a new biography. The “roving food editor” for the New York Herald Tribune and This Week magazine, Paddleford crisscrossed the country for decades interviewing homemakers, short order cooks, farmers, celebrities and socialites about the food on their tables. Inevitably, she would persuade them to share a prized recipe with her readers.

Paddleford was a writer who believed that people were integral to the story of food. I feel as if I have found a kindred spirit and within minutes, I order the biography and locate a long-out-of-print copy of Paddleford’s 1960 opus, What America Eats on ebay. It is a compendium of her reporting from This Week, featuring essays and recipes on everything from Election Cake to Sauerbraten and Oysters Rockefeller, all organized according to the regions of the country that made the dishes famous.

Author and food writer Kelly Alexander made it a personal mission to resurrect the intrepid food writer, once referred to as “the Nellie Blye of food journalism.” A former editor at Saveur magazine, Alexander had written an award-winning profile on Paddleford. She then teamed with archivist Cynthia Harris to write “Hometown Appetites: The Story of Clementine Paddleford, the Forgotten Food Writer Who Chronicled How America Ate.”

The two women poured through Paddleford’s personal papers, now archived at Kansas State University, and spoke to dozens of friends and relatives to craft a profile of the woman behind the byline. The book is an intimate visit with a shrewd and flamboyant character. Alexander and Harris meticulously and reverently reconstruct Paddleford’s life, from her childhood in America’s heartland to her days as food editor at the Herald Tribune. Paddleford was said to have traveled 800,000 miles during her career, interviewing American cooks from every walk of life and sharing their recipes. The authors paint a vivid portrait of Paddleford, swathed in a fashionable cape with a large pad in hand, on the hunt for yet another distinctly-American recipe. If you care about food, and the central role it plays in our lives, you will likely make an immediate connection with the woman who devoted her career to chronicling how America eats. 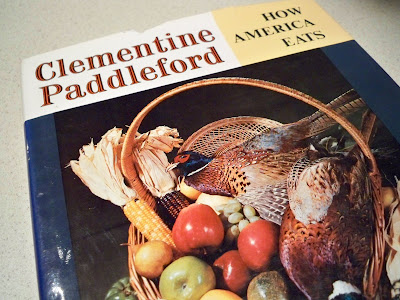 Paddleford was sometimes criticized by her rivals for her universally positive approach to the often-basic style of American cooking, but she was not a food critic. She was a writer who celebrated food and its connection to daily life. Her critical opinion mattered less than her reporter’s ability to record the scene.

Channeling Paddleford, I do a little leg work of my own and manage to track down Kelly Alexander. She graciously agrees to an email interview and shares her insights into what motivated Paddleford, her influence on the profession of food writing and our understanding of regional American recipes, and what the pioneering reporter would think of today’s food bloggers:

Culinary Types: Why do you think Clementine was so drawn to the story of regional American food?

Kelly Alexander: I think that Clementine understood inherently that America is a "melting pot" culture; without using that cliched term, she managed to plug into the fact that we're really all immigrants whose parents or grandparents came here from foreign shores toting their own unique food traditions. When they got here, they had to make their treasured recipes with whatever ingredients they could find -- that's the basis of regional American cooking as we know it today. Clementine was attracted to telling the stories behind the home cooks of America as they endeavored to get dinner on the table every night; it was an issue she was intimately familiar with, having grown up on a farm in rural Kansas. She knew that the food that was sacred to her in her girlhood was worth celebrating, and she made it her life's work to explore the hidden pockets of great regional American food as a way to pay homage to hard working women everywhere.

Culinary Types: What did you learn about your profession as a food writer in researching Paddleford?

Kelly Alexander: Well, it's really true that nothing in the world of food is ever "new." We think of "regional American food" as a hot topic these days, but it was around as a way of eating since long before even Clementine wrote about it. Writing about Clementine was an education in food writing in other ways, though: Her writing style is not memoiristic or especially personal, as so much food writing is these days -- it's explicitly based on solid reporting and fact gathering. It's much more structured, and frankly much more informative, than a lot of the food writing I see out there today...and it was a great inspiration to me for my own work.

Culinary Types: What would Paddleford think of today's food bloggers?

Kelly Alexander: I think she'd love the Internet. One of her hallmarks as a journalist was soliciting feedback from her readers. She would often end her columns by asking her readers to write to her, and when they invariably did she made sure to respond to every single one of them -- it's a wonder she slept given how much correspondence she produced. She was an inveterate letter writer, and I think the best food blogs today are written by people who approach their blogs in just that spirit. In short, I think she would have relied on bloggers as sources for great regional American food and would have taken pleasure in the whole online world of food.

Culinary Types: What do you think was the one thing that drove her for so many years?

Kelly Alexander: She was one of those people who was just born to be a reporter; as a child she wrote letters, kept journals, pestered the local newspaper to let her write stories...her passion as a storyteller was a huge part of her personality, and her desire to succeed, to become a famous writer, nearly dominated everything else in her life. She really wanted to tell stories, and she used food as a way to do it -- and her ambition was just positively limitless.

Culinary Types: Do you have a favorite Paddleford recipe and why?

Kelly Alexander: There are several personal favorites. The haman taschen, a traditional cookie baked on the Jewish holiday of Purim, is historically significant because it marks the first time a dish of such ethnic distinction was featured in a major national newspaper -- and the cookies are delicious, which helps. But the one I'd say is probably closest to my heart is called "Aunt Sabella's Chocolate Cake." It came from a lady in the Pennsylvania Dutch countryside. It's a small, rich, moist chocolate cake -- really more like a very large, very intense brownie -- and Clementine, who had a real sweet tooth, wrote about it with such enthusiasm ("Chocolate cake -- now that's my meat!" she said) that it drew me to it. It's a simple, classic, American dessert -- I would question the sanity of anyone who could find fault with it!

Culinary Types: Do you think American regional food is viewed differently because of Paddleford's work?

Kelly Alexander: I really don't think it's overstatement to say that we wouldn't have Rachael Ray without Clementine -- she paved the way for reporters and writers and cooks to talk about food as more than just a recipe formula. She was interested in the stories behind the recipes, and she was the first person to really make those stories come alive for the American public. She is such an integral part of American food history, and I'm just happy that she's finally getting her due.

thanks for the interview -- this story stood out for me as well in the recent Gourmet, so was fun to read a "follow up" here as it were :)

Hearty food. Heartland food culture. It's plaintalk from the plains that makes her writing resonate. Food is the hero, unadorned by flowery adjectives. We need more Clementine's in journalism today to keep it real.

This may very well be my favorite post. (until the next one of course:) Thank you so much for bringing another dimension to one of my most favorite recipe books. I had no idea Clementine Paddleford was such a prolific food journalist. I have added Hometown Appetites to the long list of books I wish for. Perhaps, I'll move it to the top:)

I must save this post T.W. I'm thinking I will utilize it for Cookbook Month, this month. I'll wait until I get back to PA where my copy of What America Eats is waiting for me to re-visit. Thank you so much for sharing. You are quite the interviewer:)

Wonderful interview, and such fun to learn more about Clementine. I love to think that some of our favorite food writers of the pre-internet era would have embraced the online world, and would today be our favorite food bloggers.

I have never heard about Clementine Paddleford. Thanks T.W. for bringing attention to such a wonderful food writer!

Thanks for the information about this book--your interview made it even more interesting. Like Louise, I'll be adding it to my wish list.

Awesome, I loved learning more about Clementine--and mulling over how things changed because of her, and just kind of thinking how things might be different--and I'm also pondering who will be the pivotal foodie characters of our generation!

Giff - Clementine was really a trail blazer - I like the fact that the biography includes recipes that have been re-tested for modern ingredients and techniques.

Linda - Clementine was always on the road looking for a story from the next "home cook." Sounds like a fun job, huh?

Louise - What do you think of "How America Eats"? I think it would really be fun to do an updated version of this book, but it was years in the making.

Lydia - I think Clementine would have really identified with food bloggers - it was that kind of spirit she was seeking in the pre-tech era.

Veron - she was a woman after your own heart!

Kathy - It's a good read, with lots of great anecdotes. You'll enjoy it.

Cakespy - sounds like a good topic for one of your famous polls!

Are you considering doing another Tour de Clementine of How America Eats?

It would certainly go together a lot faster this time, with the ease of modern travel or even, perhaps, doing many of the interviews via the Internet and then posting them on your blog.

Might get you that book deal you have/have not been dreaming of, TW.

Marti - Thanks for stopping in, and Happy New Year! I must say that I felt Clementine was a kindred spirit from the moment we "met."