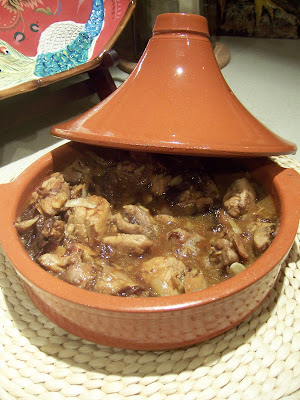 The Halloween-orange clay pot and cover -- shaped suspiciously like a pointed witches hat -- had been hoisting a guilt trip on me since last summer. Not to mention, collecting a thin layer of dust.

I’d purchased the tagine at Sur La Table in New York, when Veronica and I were browsing between classes at the Harold McGee Lecture Series. Immediately, I thought of John and Ramiza, my brother and sister-in-law who live in Morocco. Ramiza is an excellent cook and is particularly skilled at Middle Eastern, Indian and Moroccan dishes. She’s inspired me to venture outside my culinary box, and creating an authentic Moroccan dish would be a nice way to evoke their presence, even though they now live thousands of miles away.

That was July. Now, here we are approaching the end of the year and my little personal-sized tagine is feeling decidedly unloved.

Enter Lydia of the Perfect Pantry. Recently she wrote about a tagine she had designed with an artist friend, and offered a recipe for Chicken with Prunes and Almonds, a dish traditionally served at Ramadan. The list of ingredients set my mouth a-watering and I knew it was time to take the plunge and tackle tagine.

I choose a Sunday night for the big event, but quickly realize that I’ll need to plan ahead. The sticker on the glazed terra cotta tagine strongly recommends that it be submerged in water for 12 hours before its first use. Ah, well. Saturday night is “bath night,” after all.

On Sunday the tagine is removed from its long soaking and wiped dry with a dish towel. I spend the afternoon at a chamber music concert and return home confident that I’ll have dinner on the table in about an hour, according to the recipe. I halve the recipe, since my tagine is smaller, and quickly combine boneless chicken thighs, cinnamon, nutmeg, honey, almonds and prunes. I top the concoction with the witch’s hat and place it on the electric cook top set on low heat.

That’s when the paranoia sets in. Instead of kicking up my feet and enjoying a cocktail, I keep returning to the kitchen to make sure the clay pot doesn’t explode. I’ve never put a casserole directly on the cook top. However, the old adage, “a watched pot never boils” can be applied to the tagine -- “a watched tagine never explodes.” That’s fortunate.

However, it does start to sweat, and a hint of steam begins to rise. 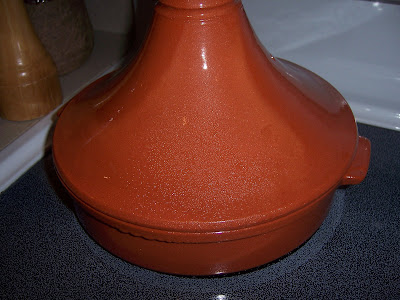 Dutifully, I stir the mixture from time to time. I am somewhat concerned about regulating the heat on the stove, which I find is a chronic problem with electric ranges. In her directions, Lydia says “be patient” and the watery liquid will eventually become a thick, mahogany sauce. It is beginning to simmer, but I’ve already passed the one hour mark, and the chicken is still somewhat raw (note previous remarks about temperature regulation of electric ranges). It is at this point that I go for the cocktail.

We are now nearing the second hour of the great tagine test. The terra cotta has not exploded, and I hear some sizzling happening inside that supernatural witch’s hat. At this point, it is almost time for “Brothers and Sisters” and I would very likely be borderline cranky, if not for the cocktail, but I am determined to see this experiment through. I open the pot for one more stir and witness a transformation. Before my eyes are succulent tender chunks of chicken covered in a rich glossy sauce. The taste is sweet and savory, infused with honey, warm exotic spices and melt-in-your-mouth almonds. 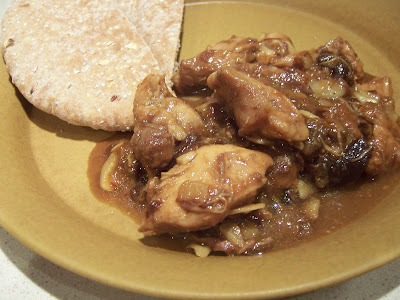 I nearly squeal with delight. It is that good. The witch’s hat has performed its magic. John and Ramiza would be proud.

Email ThisBlogThis!Share to TwitterShare to FacebookShare to Pinterest
Labels: Chicken with Prunes and Almonds, Moroccan Cooking, Tagine, The Perfect Pantry

TW, I am proud, too!!! And I'm so glad you christened your tagine with this wonderful dish. I guess the two-hour cooking time reflects the difference between electric and gas cooking, and also the difference in the pots themselves. After I posted this recipe, one of my readers sent me a recipe for lamb with prunes and saffron, which is the traditional recipe. I'll email it to you.

T.W. - Thanks for the education on tangines today. The lid on your pot looks like it would be difficult to remove when hot--I like the bulb on Lydia's.

Did you read the article about tagines in Cook's Illustarted? They said that the All-Clad modern tagine and the Le Creuset dutch oven lose less moisture and are better than the traditional ones like yours. I'd like to know how you think they compare.

Looks tasty, thanks for the synopsis.

Hi Lydia - I like the fact that this was a "fix it and forget it" type of recipe! Can't wait to try a recipe with lamb!

Kathy - the lid was a little tricky to handle, but it does stay cooler than the base of the pot.

Katie K - I'll have to get a hold of the article. It makes sense that there are some newer versions that are designed to lose less heat. This was probably an issue with mine, especially when you open the cover to stir frequently.

Kelly - I was really surprised at how easy it was, and how the ingredients contributed to the intense flavor.

Love your pot T.W!
And thanks for sharing your experience with us!

Ooh, that's so pretty! I always look at tagines in the store but am never sure that I will actually use it.

You asked about my smoker- mine's a full sized, outdoor smoker, with a little side compartment for building a fire to create your smoke. It's fantastic...

Thanks, Valentina - I'm now a true convert and plan to experiment more this weekend!

Hi Brilynn - It took me a long time to buy, but I'm really pleased with the outcome. Thanks for the information on the smoker - your results sound SO good!

I was thinking of Lydia when you mentioned her! Between the two of you, I'm so inspired to make a tagine. It looks beautiful, T.W.

Hi Susan - there are so many good things coming from Lydia's Perfect Pantry. This really was an amazing dish and I want to try other recipes as well - I'm hooked!

This was quite an event for you! I would have been a nervous wreck,also predicting a grand explosion!I do not own one of these dishes~seeing them all over now with some very interesting recipes. Lydia's recipe sounded so delicious!

Hi Jann - I just tried another tagine recipe with lamb and saffron -- it was very savoury and sweet, and tasted even better the second day!