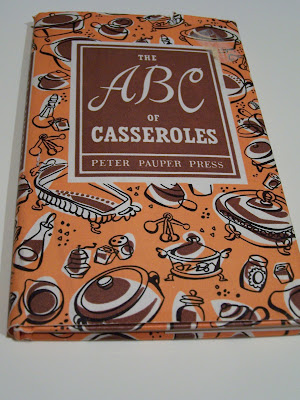 I discovered the slender orange-and-brown cookbook in an antique market in Vermont, tucked between stacks of Pyrex in primary colors and translucent green Jadite mixing bowls. The retro-culinary illustrations called out to me and the exuberant celebration of the classic casserole touched my suburban-born soul.

“The ABC of Casseroles” was published by the Peter Pauper Press, Mount Vernon, New York in 1954, and sold for one dollar, a bargain, as it promises “countless ideas for quick one-course dinners as well as imaginative and festive dishes that you will want to set before your most cherished guests.”

A curious preface, signed by an anonymous entity named “The Editor" takes a distinctly mid-fifties view of gender roles and culinary qualifications. "The Editor" writes: “None of the recipes is complicated, or too difficult for the inexperienced cook. We have had her particularly in mind in assembling these recipes, since it is she, and not her older and more experienced sister, who usually holds down a job, and cooks too.”

Given this seemingly parochial viewpoint, one can only imagine what “The Editor” would have thought of Rachael Ray or Emeril Lagasse.

According to “Square Meals” by Jane and Michael Stern (Alfred A. Knopf, Inc. 1985), one-dish meals, or casseroles were the epitome of glamorous convenience in the 1950s. A casserole would usually contain meat, fish or poultry, and vegetable and starch all in one. Casseroles were a time-saver, as they could be prepared in advance and frozen, and were a technique for economizing, as less money would be spent on individual portions when all ingredients were combined in one dish. A colorful range of snappy serving dishes were available to the discerning host or hostess to artfully present the casserole on a buffet table.

“The ABC of Casseroles” appears to be designed for a new bride and revels in its June Cleaver-ness. “The Editor” tells us: “Many of the dishes can be prepared the day before, and baked at the last minute. And many are quickies that can be both prepared and cooked in an hour’s time…A casserole, a tossed green salad, and steaming coffe make an elegant and sophisticated dinner. Add a fancy dessert and you have a feast!”

Each section is adorned with chocolate-brown calligraphy for each letter of the alphabet, and a poetically-inclined copywriter crafted priceless rhymes like, “Brides can’t be bothered to cook all day long so they whip up a casserole and sing a fine song.”

One wonders if “The Editor” managed to kitchen test or time out any of the recipes. No less than six recipes contain oysters (Jenny’s Oysters and Macaroni could cause an international culinary incident), but offer no instruction on how to clean, shuck or prepare the bivalves prior to mixing them into a casserole dish. Then, there’s that mysterious “White Sauce” that keeps showing up page after page. It’s hardly a timesaver, and there are no instructions on how to whip up a successful batch, nor how much time it will take (I suspect “The Editor” might never have set foot in a working kitchen.).

Most of the recipes hearken back to a nostalgic and comforting, pre-packaged and perhaps less healthful culinary era (Noodles and Salami???!!). But, if you’re feeling in a retro 1950s mood, put on that Perry Cuomo LP, and try your hand at this elegant entrée from “The ABC of Casseroles." It can be found under “C” and be advised you’ll have to come up with 1 ½ cups of white sauce, as the recipe appears to start already in progress. The walnuts are obviously added for protein, color and texture. Obviously.

This dish sounds so scrumptious. I love crab with some kind of white sauce and cheese. The only thing I cannot imagine in this dish is the hard boiled eggs but then again it's worth a shot!

Have to give The Editor some credit for using a White Sauce in the recipes rather than Cream of Mushroom soup. I wonder if anyone actually prepared any of those casseroles with the odd food combinations?

This casserole does look delicious. I think casseroles are a dying art. You used to be able to count on a couple of casseroles at every potluck supper, but now I don't see them very often at all. Lucky you, to find this great book!

I love the passage, T.W. Thanks for including it! I have never made a casserole. Gasp! Neither had my mother. That's probably why. ;)

Hi Veron - we have an old family recipe from Hungary that has ham, potatoes, sour cream and hardboiled eggs, so it is familiar to me. I think the extra dairy with the sour cream makes it a good combination in that recipe.

Kathy - as you might expect, given the era, there are also options for casseroles using canned soup! So one could choose "classy" or "quick!"

Lydia - casseroles are still a staple for me. I enjoy the different combinations and possibilities, not to mention the homespun history that comes with them.

Susan - I do think that casseroles are kind of a heritage meal that gets passed along from one generation to another! It was actually my first experience in cooking!

These kind of finds always crack me up. I love the 1970's Betty Crocker Entertaining ones that some one gave me as a joke...that I actually use.

Hi Peabody - between the photos and the text, some of the old cookbooks really are a hoot, but they have some really good recipes!

This sounds delicious to me-I was a child in this era and we had many casseroles,prepared ahead and ready to throw in the oven. Usually our parents were visiting with company/relatives and preparing casseroles made extra time for that!And, anytime I can throw on some Perry Como music is wonderful-his brother lives by our family home outside of Canonsburg, PA

Jann -- I a truly a casserole fan. I was born in the "Casserole Corridor" of Long Island!