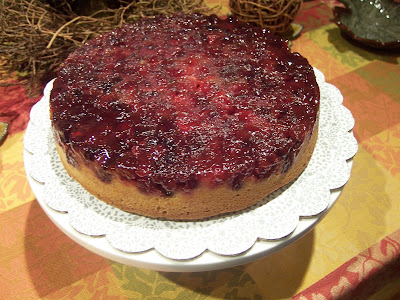 No, this is not a post about perky red fruit found below the Equator. But, for those of you who have a driving desire to turn Thanksgiving upside-down this year, this tempting cake is a fine option.

There have certainly been many attempts to turn our national day of Thanksgiving topsy-turvy. Sweet Potato Casserole with Mini Marshmallows, and Turducken immediately come to mind. Then, there are the annual "new-and-improved" turkey techniques we have to master for one meal out of the year, be it brining, or backyard grilling. Has anyone tried beer can turkey? (I'm not joking!)

In many respects, Thankgiving is really about culinary individualism. When my nephew Doug was just a young tike, he made the ultimate culinary statement on Thanksgiving Day when he skipped the turkey, gravy and stuffing and had a banana instead, because "it's the only thing I like here."

Cranberry Upside-Down Cake isn't about a radical reinvention of the holiday menu. It's a nice blend of elegance, tradition and suburban kitsch. Cranberries are high in Vitamin C, were cultivated by the Native Americans before the early settlers arrived, and were grown for commercial purposes beginning in the early 19th century in Cape Cod, Masssachusetts. The first American cookbook, American Cookery, written by Amelia Simmons in 1796 recommends that turkey be served with cranberries. More than a decade ago, during an autumn visit to Cape Cod, I was lucky enought to visit a cranberry bog during harvest season. The bog was flooded with water and looked like a crimson lake. Over the years, creative food marketers have come up with thousands of formulas for cranberry relish, and even a recipe for Mock Cherry Pie, made with cranberries.

The process is exactly the same as pineapple upside-down cake. Butter and spices coat the bottom of the cake pan, followed by a layer of fresh cranberries and a thick batter. Once baked and inverted, the glistening top is thick, jammy and studded with jewel-like ruby-colored fruit. You immediately note a tart scent of warm spices which evokes a memory of cinnamon "Red Hots." The recipe is simple, takes just under an hour to prepare and can be found here. Try it this Thanksgiving. It might inspire you to do a headstand in the kitchen. Just be careful not to hurt yourself.

I made Cranberry Upside-Down Cake for the farewell party for our intrepid associate, "Babs Gordon," who is leaving us and moving on to new adventures. For the past two-and-a-half years, Babs has graced us with her razor-sharp insight, keen intelligence and gracious humor. No doubt her new employer will be head-over-heals for her as well!

The cake looks great--a perfect use for my remaining cranberries. Have to laugh when I read about the cranberry bog looking like a crimson lake. Ocean Spray had a promotional thing in front of the supermarket last week. A (very) small black pond liner filled with some water and cranberries. It looked like a crimson, ummm, wading pool.

I have always found this cake so beautiful. T.W.!

Of course now I'm thinking about adding some Red Hots to the topping!

Hi Kathy - that sounds sort of like bobbing for cranberries!

Patricia - thanks so much. It is so easy to make, and looks so beautiful when complete.

Lydia - Maybe you should have the red hots on the side!

After the famous pineapple upside down cake, your cranberry cake is a great alternative!

Hi Valentina - thanks! They will now compete for "favorite upside-down cake!"

Oh my goodness that looks so impressive!

Kelly - thanks for visiting!

I love pineapple-upside down cake and cranberries, so how could I not love this cake? So festive for the holidays too!

Susan - I like this recipe because it's not too sweet, but the tartness of the fruit really comes through.

This is a wonderful version of the up-side down cake and I love the color!We had our summers on the Cape and really got into cranberries,bogs and all. There is a very special place in my heart for anything with cranberries!

Thanks, Jann - one of these years, I am going to have to go back to visit a cranberry bog again. It's such a distinct form of agriculture.