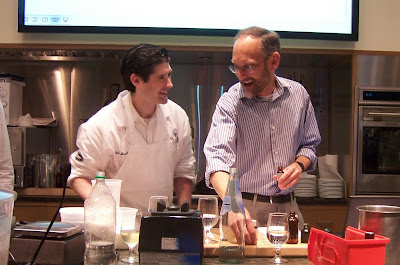 It is the final day of the Harold McGee Lecture series at the French Culinary Institute and our hosts on this journey about using the scientific method in the kitchen are struggling with a little chaos theory at the front of the room. An important package containing essential oils for a segment on flavors has failed to arrive, and even the projector doesn’t seem to respond as Director of Culinary Technology, David Arnold repeatedly pokes the remote. Finally the equipment comes to life and we begin.

Today’s topic is Science and Modern Cooking, and Dr. McGee opens with a bold statement that initially takes me by surprise – the trendy term “molecular gastronomy” is a fad. As in empty. No meaning. Hogwash.

For a second, I wonder if the lecture hall’s audio system is faulty. The phrase just sits there for a moment between McGee and the audience resembling a collapsed soufflé. Why would the world’s most preeminent authority on science in the kitchen purposely deflate such a deliciously highbrow phrase?

It seems it’s a matter of sheer practicality, which I’m beginning to realize is Harold McGee’s preferred method. As he elaborates, I like what I hear more and more.

He explains that the phrase is really a marketing term that was dreamed up to attract participants to a workshop in the mid-1990s, but the fact is chemistry and cooking has been linked since the mid 1800s.

He then presents an intriguing premise – the “MG” phrase has actually been shunned by the very chefs the media applies it to. “It’s much more about the individual and their vision,” he explains. McGee presents a number of position statements or “manifestos” by leading chefs that address the conundrum. McGee even worked with a number of top chefs to write a statement that sets the record straight about science in the kitchen. He offers a perspective by Ferran Adian of elBulli that I find particularly compelling:

“Cooking is a language through which all the following properties may be expressed: harmony, creativity, happiness, beauty, poetry, complexity, magic, humour, provocation and culture.”

McGee brings it all together for us in a mild-mannered but authoritative way: “Science is a piece of it, because it allows these people to enable their vision, but science is just a tool.” We then plunge into a segment on new tools and ingredients top chefs are using each day in the kitchen. But McGee cautions that while ingredients like “hydrocolloids” are au courant, the processes they facilitate, such as thickening, gelling and emulsifying have been used by cooks for years. David Arnold starts up a vacuum distiller, a massive device with dials, rubber hoses and glass tubing that looks like it belongs in an emergency room. Nils Noren mixes up a concoction of cucumber, oranges slices and herbs into a green soup. David puts it into the distiller and it starts chugging. The exercise shows how pure, crisp distinctive flavors can be condensed and extracted from a mess of ingredients.

At lunch, Veronica and I return to Balthazar because there is a better selection of sandwiches on weekdays. But I soon learn that she has an ulterior motive. A recent convert to tart baking, she purchases a full sampler platter of tarts – including Cherry Clafoutis, Mango Souffle Tart and Apricot Frangipane Tart.

Clearly, I’m there to enable her obsession, and I participate willingly. We return to the classroom and set out the tarts on a desktop, buffet style so we can evaluate the finer points of each. We both vote in favor of the impossibly fluffy, golden Mango Souffle Tart.

“You’re probably going to write that I force fed you all these tarts,” she says.

During the afternoon Dr. McGee and company take us on a magical mystery tour of sensual perceptions. We study taste, smell and flavor, and I learn through a simple test that I am what the experts call a “hypertaster,” which means I have more taste buds than the Average Joe. We sample different parts of a tomato and discover that the savory taste is more intense at the core, and sniff banana slices to discover that some aromas from the fruit are actually the same as those that emerge from cloves. A strawberry has dozens and dozens of aromas that are released from one piece of fruit and meld to create that unmistakable essence of strawberry.

Our course completion certificates in hand, Veronica and I say goodbye on the steps outside the French Culinary Institute. She must return to her Test Kitchen, and I to my other daily endeavors.

“Back to reality,” Veronica says.

“Well, for us, that would be virtual reality,” I reply. “I’ll catch up with you in the blogosopher.” We hug, and I head for the subway. The last few days have been extraordinary for their many discoveries.

I read his writings over and over again! and you got to meet Veronica...great!
Thanks for the recap.

Hey T.W. , I am back. I got to take an earlier flight home although the plane had to sit in the runway for an hour!
Anyway, thanks for helping me finish the tarts :). I still can't believe how we met. Unplanned is a good plan like you said.

I found McGee's quotes about MG intriguing; and Ferran Adian's comment sounds like a sort of culinary mis-en-scene. Beauty, poetry, and complexity really can't be conveyed in a discussion soley about atoms and molecules, can they? Thanks for another engaging post, T.W.