Dinner with Veronica at The Little Owl 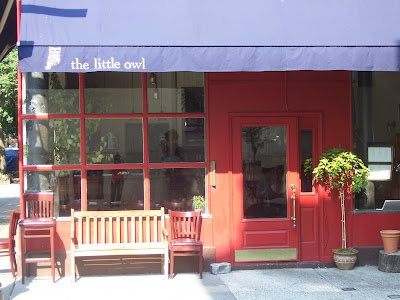 The first thing you notice about Veronica, the Chief Scientific Officer of the blogosphere’s top Test Kitchen, is the lighthearted curiosity that radiates from her eyes. She is always observing and discovering something new.

We are midway through the Harold McGee Lecture Series at the French Culinary Institute, and together we grab a cab headed for Greenwich Village for dinner at The Little Owl, a tiny bistro on the corner of Bedford and Grove Streets, which Frank Bruni of the New York Times described as an eatery of “irresistible earnestness and exuberance.”

I’m there to learn what makes Veronica, an established and successful food blogger, tick. Veronica, an avowed carnivore, is there for the signature pork chop entrée which has made The Little Owl a favorite on the New York restaurant scene.

From the time I first started reading her blog, I could sense Veronica’s passion for observation and documentation. She meticulously chronicles each ingredient, the techniques in each recipe and the results she creates in her Richmond, Virginia Test Kitchen. As we share a salad of arugula and peaches and an appetizer of meatball sliders with gravy, I want to know to what she attributes her precise attention to detail.

“It’s the engineer in me,” she explains. “The Hungry Hubby says I have an analytical and logical mind.”

As we talk she is examining the salad and makes a discovery. “Figs! I love figs,” she exclaims with delight. Then, she notes, “The peaches seem a bit raw, but it is refreshing.”

Casual readers of Veronica’s Test Kitchen might not realize that she first came to the United States in 1996 from her homeland of the Philippines with just a large suitcase and a carry on bag to take a job in the Information Technology sector. Although her father ran two restaurants at home she had actually never learned to cook from family members.

“When I came to the United States ten years ago, I was even afraid to boil water,” she laughs.

Our entrees arrive, and Veronica immediately begins to study the grilled pork chop that sits atop a bed of butter beans. “It’s so big,” she marvels about the oversized bronzed chop. She starts to dissect the dish. “How is it seasoned? This looks like cumin,” she comments. She takes a bite. “Oh my God, it’s so tender!”

In the spirit of scientific exploration, she samples my crispy chicken and I test her pork chop. Both dishes meet with resounding approval. 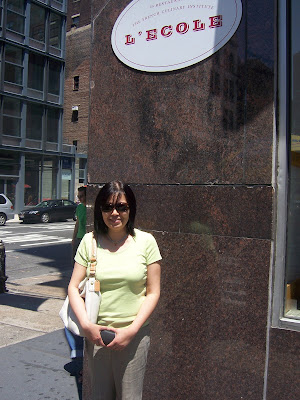 So what prompted a self-taught cook to enter the uncharted territory of the blogsphere and set up shop?

“I was looking for a recipe for Duck Confit on the Internet, and I came across a blog.” Veron tells me. A compulsive note taker, she saw the blog format as an ideal way to chronicle her observations in the kitchen.

“It gives me accountability,” she says.

She opened “Veronica’s Test Kitchen” in September of 2006 and by late October of last year, she was already tagged as a Typepad “Featured Blog.” To date, the Test Kitchen has had more than 40,000 visitors.

Veronica has certainly found culinary soul mates, first through the comments that readers left on her site, and later, with professionals in the field who respond to her questions about different techniques and dishes.

“Your blog helps you reach a vast amount of people who are as passionate about food as you are.”

While her focus is always on precision, accuracy and results, Veronica is never shy about documenting failures, because she feels there’s something to be learned from each kitchen project. She admits to being somewhat obsessive about the details, and even went so far as to create a spread sheet to document a recent croissant challenge (“That was the engineer in me coming out.”). But, she tries to keep a healthy perspective.

“I like the scientific part of cooking. Immediately I think, what’s the equation? Sometimes it clouds the artistic side, so I’m trying to find a balance.”

I ask what her favorite dish is, and she gives me a sly look. I realize I should know better than to ask. It is, of course, duck, the subject of many posts on her blog. “Anything crispy on the outside and juicy on the inside – I’m there!” Recently, however, she’s developed an infatuation for tarts.

We are presented with dessert. Veronica gets a warm brownie cake flavored with espresso and I get the raspberry beignets with Nutella. I can’t resist asking about “The Hungry Hubby,” a constant presence in her blog posts. She explains the origin of her spouse’s nickname.

“I made some brownies and took them to work, so he complained that he was left “hungry.” Afterwards, he started posting under the nom de plume.

Recently, they shared a week of “boot camp” training at the Culinary Institute of America in Hyde Park, New York.”

“I took him to boot camp because he’s my lifesaver,” Veronica explains. “He preps very well, he’s got awesome knife skills, and he’s got hands that are impervious to heat!”

She is still working on her written accounts of boot camp, but says it was a rewarding experience. “We’re having withdrawal symptoms. The Hungry Hubby says it was the best vacation ever.”

So what’s next for this intrepid chef, explorer, and correspondent on science in the kitchen? At some point in the future, she might like to teach cooking or open a pastry shop. But for now, she’s intrigued by a high-tech infrared thermometer that Harold McGee has been using as part of his demonstrations at the French Culinary Institute.

“I really want that thermometer!” she smiles, and I know Veronica is already contemplating her next kitchen experiment.

I still think it's so amazing that you two met in this class -- seems from your posts and Veron's that you have known each other forever.

I'm usually tongue-tied during interviews but you managed to get me talking :). I had fun and am really impressed how you made me sound coherent! ;)

The brownie cake sounds great. We even have a jar of Nutella in the pantry, great on warm toast.