Breakfast in the Berkshires 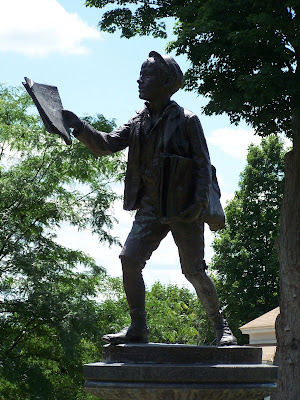 The statue of the Newspaper Delivery Boy greets me once again as I enter Great Barrington, Massachusetts. It has a Norman Rockwell-esque quality and the way he thrusts the paper forward always catches my eye. This somewhat quaint, antiquated symbol of the early information age has become my symbolic greeter each time I return to the Berkshires.

There is a line of gentle, rolling mountains that separates the border of New York and Massachusetts. The Berkshire Mountains stretch from the Northern section of Connecticut well into Vermont. The region is sprinkled with magical destinations – Tanglewood, Shakespeare & Company, Monument Mountain, Mount Greylock, Chesterwood and The Mount. Music, imagination, language and culture infuse the crisp, pine-drenched air. 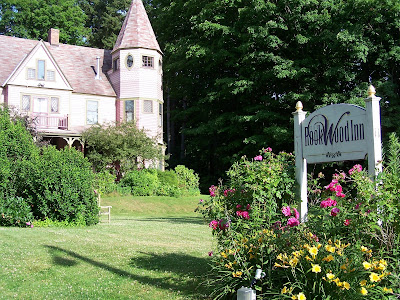 One of the key reasons I’ve come back year after year is the people and the breakfasts at the Rookwood Inn on 11 Old Stockbridge Road in Lenox, Massachusetts. Innkeeper Amy Lindner-Lesser has owned the Rookwood Inn since October 1996, when she and her late husband Stephen left their careers in social work to come to the Berkshires. The oldest portion of the inn was built in 1825 and was located in the center of the village. It was later moved to its current location and several additions were added. Described as a “painted lady” in the Victorian style, the mauve and violet hues of the Rookwood are a distinctive sight in the historic village.

I’ve been away for some time, but it all feels incredibly comfortable and familiar, like a second home or a special retreat. I sleep better here, and I am able to forget daily pressures. Classical music fills the breakfast room, and the tables are decorated with American flags for the Independence Day holiday. I enter, and Amy and her right-hand, Christine Manarchik are both already hard at work in the kitchen. This particular morning, the entrée is scrambled eggs flecked with spinach in a crispy parmesan cup, and garnished with chives from the kitchen garden. 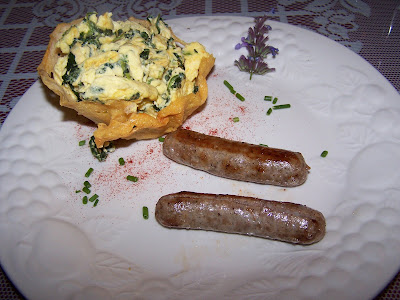 Breakfasts are made with heart-healthy ingredients and lots of flavor. Steve was a graduate of the Hotel Management program at The Restaurant School in Philadelphia, and developed many of the recipes still used today, but Amy and Chris continue to experiment with new dishes that are low in fat and sugar.

“Our recipes are low fat, easy and delicious,” says Amy as we chat over coffee about the Rookwood breakfast menu.

“We get lots of requests for the recipes,” says Chris. She describes her cooking methodology as Italian-style. “I don’t measure anything,” she confesses.

Another morning I’m presented with an individual breakfast parfait, layered with granola and vanilla yogurt and finished with a patriotic flourish of strawberries and blueberries. 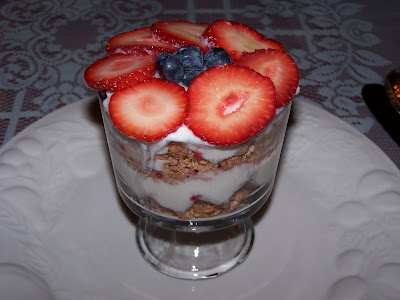 A Croissant a l’Orange is an ingenious variation on a soufflé. One croissant is sliced in half and placed in an individual soufflé dish. Marmalade and tart orange zest is layered inside along with a custard of cholesterol-free eggs and a little half-and-half for flavor. A sweet orange aroma rises as I puncture the flakey golden crust with a fork. 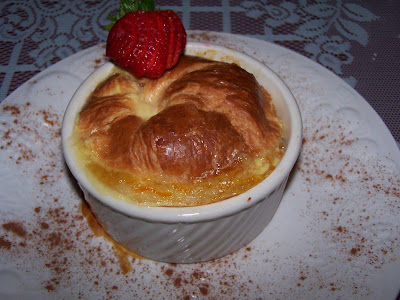 In the afternoon, I relax on the rambling porch with a homemade chocolate chip cookie and some pink lemonade. It is summertime at its finest. 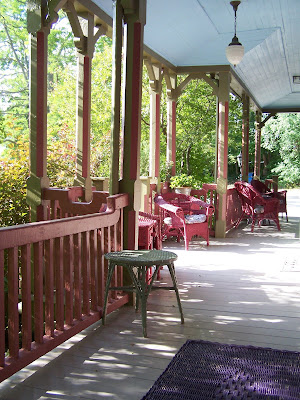 Amy has been vowing for years to publish “The Rookwood Cookbook.” I’m lobbying hard that this be the year. She’s got all the right ingredients – hospitality, flavor, a vintage setting and that touch of Berkshires magic that has brought me back each summer season.

I've spent many lovely weekends in the Berkshires (in fact, we're camping there at the end of this month), but I've not been to this inn and I'm so glad to know of it. In the summer we do like to camp, near Tanglewood, but in colder weather we're a bit wimpy and would rather be indoors! I sleep better out there, too. Must be the air, and the good food.

I vote for a cookbook as well! These dishes sound delightful and creative - Thanks for the great pictures.

Breakfast looks great! I used to go to camp out in the Berkshires when I was younger. When I got older we occasionally stopped at the Red Lion in for a drink on the porch.

Lydia - Isn't it a beautiful area? Are you going to Tanglewood when you visit?

Trish - Thanks for visiting. The cookbook is a must!

Bradley - I've enjoyed many a beverage on the porch of the Red Lion!

What a beautiful area this is~I can see whay you enjoy your visits there. Did you actually eat all this food...loved the croissant/orange creation~I am going to try this ! Let us know when the cookbook come out-

Hi Jann - The photos cover two days of breakfast, and the orange croissant souffle is a real keeper!

Oh these dishes look simply sumptuous. Never been to Bershires, seems like I need to schedule a trip there soon. The breakfast parfait is my favorite!

At first I was thinking that is a long way to go for breakfast...
but now I see why.
What a lovely ambiance and the perfect get-a-way!

MMMmm & Mmmm & MMMM!!!! What a luxurious breakfast & in such a beautiful setting!
I wish I could have visited Berkshires!

Veron - I love the breakfast parfait, and it is really easy to make.

Sandi - It's worth the trip!

Valentina - You should visit - there's nothing better!