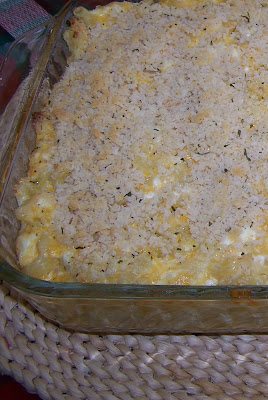 Okay, maybe I should stop now.

But, consider a double helping of cheese? How can that be bad?

For my brothers and me, it was perhaps our most requested meal, and one that I often helped prepare in my formative years. Double-Good Macaroni and Cheese meant an unusual combination of two kinds of cheese. We loved the way the sharp golden cheddar cheese contrasted the firm, creamy white curds of cottage cheese, of all things. A touch of grated onion gave the dish some unexpected bite and sour cream added extra tang. In the days before low-carb diets were invented, it was like heaven multiplied by two. We were fascinated by the way our engineer Dad cut the toothsome casserole into geometrically-precise squares, much like a slice of lasagna. As I recall, he also sliced cartoon ice cream into neat rectangles, a habit acquired by having to dole out economically-equal portions for a family of six.

At a recent reunion of the entire family, Mom prepared Double-Good Macaroni and Cheese knowing quite well that it would fill our stomachs and feed our appetites for nostalgia. And, she made two pans-full! We all did a double-take! 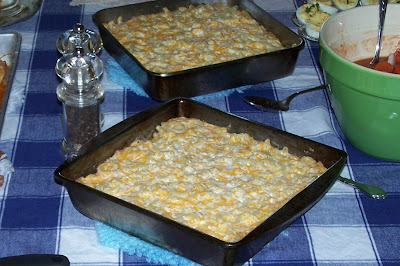 For a pot luck dinner party a while back, I embellished the classic casserole with crunchy Panko breadcrumbs (top photo). When it comes to fine culinary techniques and comfort food, I am rumored to maintain a double identity.

Now, let’s look at the possible historic connections, because you know I love old stories, and you must know that Macaroni and Cheese is just brimming with history.

Many people don’t know that Thomas Jefferson, our gourmet president, introduced a macaroni machine to the United States in the late 18th century. This has led to the perception by many that the inventive Jefferson created the Macaroni and Cheese dish. While this fact is often debated among culinary scholars, there are a number of recipes for the dish attributed to Jefferson and thought to have been served at his hilltop Virginia home, Monticello.

The famous – and some might say infamous – Kraft Macaroni and Cheese Dinner was introduced by the food manufacturer in 1937. The deluxe version with the can of Velveeta cheese sauce included was a convenient one-pot dinner and considered fine dining during my university days.

We must also review the crucial historic impact of double-ness. Actress Patty Duke played identical cousins on American TV in the 1960s that were double-the-trouble, and suburban sorceress Samantha would often prepare a double martini for husband Darrin on “Bewitched” usually after her mother Endora had turned him into a mule. Let’s not forget Sam’s wacky twin cousin Serena. When they were together, people thought they were seeing double.

Not a lot of people can make references to macaroni and cheese, Thomas Jefferson, Patty Duke and “Bewitched” work together in the same context.

But, enough of all this double-talk. Don’t we get plenty of that all week? You want the recipe, right?

I'm going to a potluck anniversary party next week, and I've been looking for something a bit old-fashioned, but yummy, to bring. Now I know!

The Macaroni & cheese sounds killer. I enjoy your blog--you have a nice sense of community in your food preparation. Nice to see a fellow Long Islander cooking away--keep on cookin, keep on bloggin, chefjp

I always love to tweak macaroni cheese, I sometimes sneak a saucy layer of green beans in there and I used to love sweetcorn stirred into the sauce. It's these little nuances that give everyone their family favourites!

Leave it to mom to come up with the ultimate comfort food. I like the idea of topping it with Panko breadcrumbs too.

I'm not gonna deny it, your macaroni sounds Triple-Good!
What would we do without our Mum?:)

Set me a place, I am coming over for dinner~it is the ultimate comfort food and we need to see more of it around!

This macaroni and cheese is looks sooo good. What's not to like with sour cream and cream cheese. I am so making this!

Lydia - let me know what you think!

Chef JP - Thanks for visiting! Wish you still had your place in Lindenhurst - sounds perfect for me!

Jann - You name the time!

Veron - I hope you like it! It's one of my top favorites!

Hi T.W. Just a note to let you know I'm borrowing this link for my Inaugural post tomorrow. Thanks, Louise

My mom has made this for my birthday every year since we first had it. I'm glad that someone else has tried this wonderful version of Mac & Cheese. It truly does make regular Mac & Cheese pale by comparison. If you haven't tried it yet, do so, you will not be disappointed.