Beer and Wursting in Bavaria 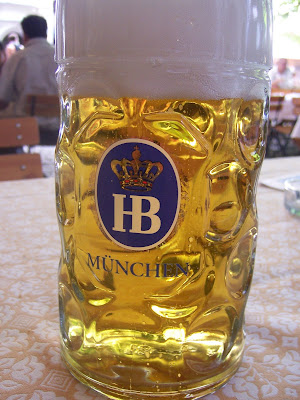 Last week, a colleague -- whom we’ll call “Hal2001” – and I were drinking very ordinary beers during a Friday afternoon company function.

“You’re going to Munich?” says Hal2001 with interest. “You should visit the Hofbrau House and write about it. Most people go for the beer, but you could write about the food.”

I find the suggestion a brilliant antidote to too-much-time-recently-spent-in-Manhattan.

Indeed, he actually sparks a distant memory, and I have a vague recollection of visiting the renowned Munich beer hall with my cousin in the mid-1980, where oom-pah music fills the cavernous hall, and waitresses build their muscles by lifting three or more gallon-sized beer steins in each hand.

Hal2001’s suggestion has given the whole trip new meaning. I’ll do it! Hanging out with a bunch of drunken American tourists in Munich and eating wurst has got to be a step up from current developments. With meticulous Internet research in hand, I head for Munich, in the heart of Bavaria.

I arrive after a long flight delay and announce to my German colleagues that I’ll be visiting the Hofbrau House. They are scrupulously polite, but eye me skeptically.

My cheeks turn scarlet. I’ve committed the ultimate faux pas and admitted to the locals that I might actually choose to visit a tourist trap.

They try desperately to redirect me. “You should go to the Weisses Brauhuas,” suggests D. “It’s authentic Bavarian.” We find a map, he circles the location and writes down the address. I glance in his direction, and suspect that he has just rolled his eyes, as if there’s nothing more he can do for me.

Several days of honest work pass, and I am torn. I want to honor Hal2001’s suggestion, but I’m not sure I can withstand the scorn of my Munich colleagues. So, I do the next best thing.

The storm clouds have parted as I head towards the Munich City Center in late afternoon. The temperature has soared above 80 degrees and the sky is azure blue. The entire population of Munich seems to be on the streets or relaxing in an outdoor café enjoying a beer. 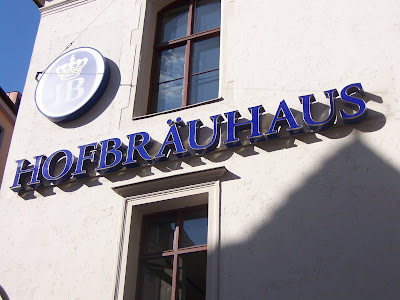 Having now confirmed my suspicion that there is no German Chocolate Cake in Germany, I make my way to the historic Hofbrau House on the far side of Marienplatz, located on a cobblestone pedestrian square on Am Platzl. The current site was established by Maximillian I in 1607. Hey, it’s the 400th anniversary, so there’s also a reason to celebrate! The building is bright white with expansive windows and blue lettering and flags beckoning the faithful. Apparently, I am not the first famous visitor. Mozart spent a lot of time at the Hofbrau House in 1780, as did Josephine Baker in the roaring twenties.

I enter and immediately detect the heady smell of yeast. There’s not much activity inside – just a large group of docile Japanese tourists and one old guy in a traditional Bavarian costume. I continue through the hall, past rows of enormous mugs, to the outdoor garden where many more of the patrons have decided to relax under a grove of ancient shade trees. There is a fountain with a pool at the center. I take a table under the thick, leafy canopy that affords me the best view and order a Hofbrau Original. 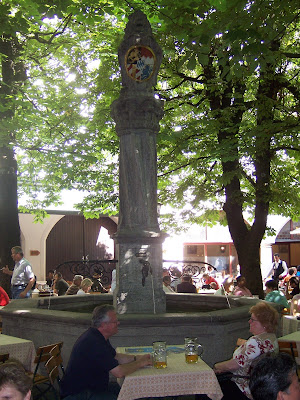 I notice several things immediately. There is no oom-pah band and the legendary buxom barmaids have been replaced by an all-male team wearing white shirts and trim black vests. What has become of equal opportunity?

My waiter brings me a huge glass mug about eight inches tall filled with dramatic amber liquid and foam. It looks like about 400 ounces for each of the 400 years. There is a Royal Blue Hofbrau House emblem on the glass. The brew is smooth, rich and yeasty, and I willingly succumb to the essence of Munich. On the far side of the garden, a photographer is taking shots of a group of rather thin women in Bavarian costumes cavorting with young male customers. The rest of the crowd is primarily tourists, tee-shirts and digital cameras.

The waiters don’t appear particularly skillful, although I do catch a glimpse of one doing a three-handed delivery of beer to a table. Later, I spy a six-handed delivery – two dark ales and four regulars. I almost toss him a EURO.

As for the food, it looks, well – ordinary. I hate to disappoint Hal2001, but nothing I see is tickling my appetite. There are plates of pale sausage, narrow slices of wheat bread, yellow potatoes, ice burg lettuce salads and some guy to my right is tackling a massive boiled meat thing. So, I opt to stick with my Hofbrau House anniversary cocktail, bask in the warm afternoon sun, and embrace the spirit of Bavaria.

As I leave, slightly more spirited than when I arrived, the buxom waitresses appear to be coming on shift and the oom-pah band is tuning up in the main hall. 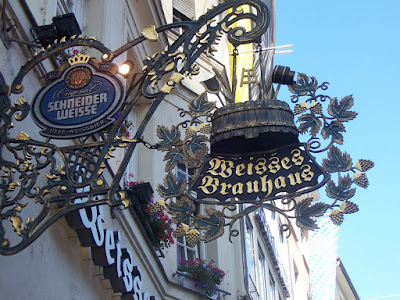 It is now time for sustenance in the form of food, so I walk the short distance to Weisses Brauhaus, or “The White Brewing House,” at 7 Tal. As you might have guessed, this building, too, is white and is doing a brisk, early evening business. Here, there are plenty of waitresses dressed in severe black dresses, and they’ve got attitude. After I wait a few minutes to be noticed, an authoritative middle-aged blonde banishes me to the second floor dining area.

I climb the steep landing and take a seat at a small table and bench that resembles what one might find in a hunting lodge. The hot room is jammed with tourists, mostly Americans, and I resign myself to the fact that we seem to be attracted to beer and travel in packs.

My formidable waitress stares at me through black glasses perched on the end of her nose. I request an English menu and she haughtily complies. I am a bit at a loss to provide any history on the Weisses Brauhaus. Even within the English menu, the history of the establishment is offered in German. There is quite a selection of Bavarian entrees and small dishes. I decide to forgo the category of entrees titled “Best Parts of Offal.” Instead, I ask for the soup with spaetzel. “We have no more,” the waitress snaps at me. So I settle for the potato soup with marjoram and the Brauhause Butcher Platter. While I wait for the order, I amuse myself with another (smaller) beer and a basket of soft pretzels and a ceramic crock of dark, sweet grainy mustard. The beer is milder, a bit like a dry white wine. 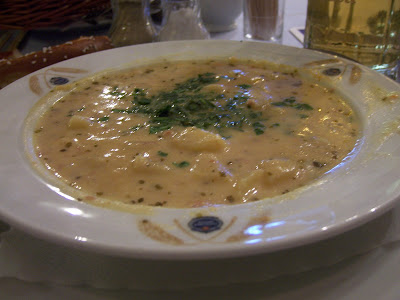 The potato soup is a beautiful sight. It is creamy and appears to glisten with rays of golden sunshine. There is a fresh sprinkling of parsley and the deep herbaceous flavor of marjoram. The aroma of potato far is more satisfying than anything I’ve experienced in terms of spuds in a while. Halfway through my soup, the room clears. Obviously, this group had to catch a bus to their next destination. I am now alone, me and my battle-scared waitress. 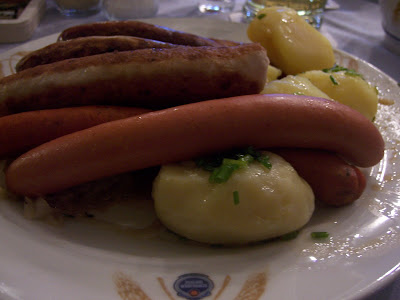 My waitress takes note of the fact that I can’t quite finish my last sausage and the remains of potato. She asks me if I want a second beer. When I decline, I think she actually smiles at me.

I leave having consumed my quota of meat and beer for the month, convinced that I will have to pay an extra freight charge at the airport in order to get myself home in the morning.

Posted by T.W. Barritt at Culinary Types at 4:09 PM

Email ThisBlogThis!Share to TwitterShare to FacebookShare to Pinterest
Labels: Food on the Road, Hofbrau House, Munich, The Food of Germany, Weisses Brauhaus

Sounds like a very enjoyable business trip! But where were your colleagues while you were out sampling the local cuisine all by yourself? They should have been right there by your side, going beer for beer and schnitzel for schnitzel with you!

Hi Lydia - there were some fine meals with colleagues during the week, but they tend to prefer the higher-end cuisine!!

I do hope your taste-buds get "tickeled" a bit more~ all that food looks rather pleasing to the eye from this end! Sometimes the local low end cuisine just fits the bill!