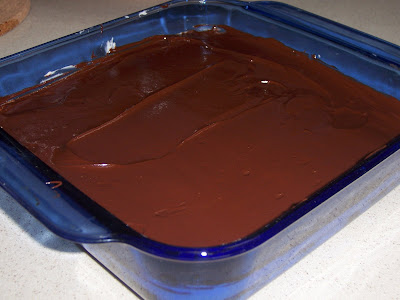 The last item on the menu provided to me by Jill for the American-Canadian Cooking Project on March 18th is the Nanaimo Bar. I kick off my investigation and all roads immediately lead to the City of Nanaimo on Vancouver Island in British Columbia, incorporated in 1874. If you’ve not heard of this port city in Western Canada, an interesting piece of trivia is that my favorite jazz singer, Diana Krall was born there.

It is also the birthplace of the legendary Nanaimo Bar, a no-bake layered treat consisting of chocolate, graham wafer crumbs, nuts, coconut, butter, cream and melted semi-sweet chocolate. Now here’s a recipe I can get excited about. Growing up on suburban Long Island, no-bake treats were part of our DNA. From Wheaties Ting-A-Lings to Kix Comets, we earned our cavities on these and other no-fuss sugar bombs from the pages of the Betty Crocker Boy’s and Girls Cookbook.

I quickly discover that while the Nanaimo Bar’s pedigree is clear, its origin is another one of those “shrouded in mystery” stories. There are any number of sugary tales on how the Nanaimo Bar came about. One source claims it emerged in the 1930s, and there’s a story that a ladies auxiliary in Nanaimo found a version of the recipe in the Vancouver Sun, where it was called “chocolate fridge cake” and renamed their version the Nanaimo Bar. But, no one has been able to locate the recipe in the newspaper’s archives. The city of Nanaimo suggests the theory that these bars were sent by miners families to work sites to brighten their day, and presumably to provide a high-energy boost. Either way, the recipe seemed to propagate in local cookbooks and through recipe swaps and became particularly popular in the 1950s. The city of Nanaimo held a contest in 1986 to find the definitive Nanaimo Bar. Local resident Joyce Hardcastle submitted the winning recipe, which is available on the city website as the Official Nanaimo Bar Recipe, and also distributed in brochures and on tea towels. Nanaimo Bars can be found in local cafes and coffeehouses throughout the Pacific Northwest.

There are also all kinds of recipe variations with some suggest flavoring the middle layer of butter cream with mint, and even tinting it green (Holy Saint Patrick’s Day!!!) .

I may never find the truth, but since I’m a bit of a traditionalist, I choose a recipe called “The Original Nanaimo Bar,” If you want proof that this is the original – proof that will hold up in court – you’ll have to look elsewhere. In fact, the recipe looks suspiciously like Joyce Hardcastle’s recipe, so I abandon any hope of historic accuracy and forge ahead. 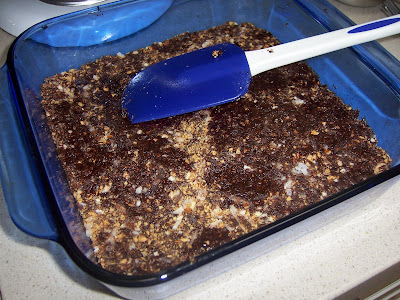 The process is simple. The bottom layer consists of chocolate, cookie crumbs, chopped almonds and coconut. I’m a little dubious about mixing an egg into melted butter and Dutch cocoa, but the result is a thick glossy dollop of chocolate Grenache that is mixed with the dry ingredients and spread in a 8 x 8 pan. 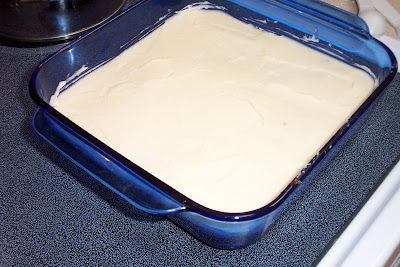 The next layer is nothing more than butter cream icing! I do a little happy dance and spread the sweet fluffy layer across the pan. 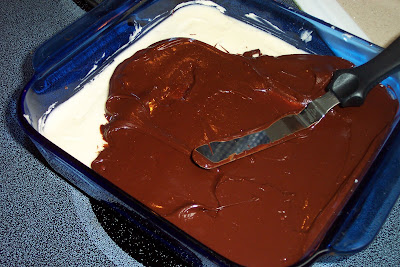 The final step requires melted butter and semi-sweet chocolate combined and cooled which is then spread on top. At this point, the calorie count must be astronomical, but I guess those Canadians need fuel to survive the harsh winters.

I give the spatula the requisite lick and pop the pan into the fridge to chill. It may be time to put my feet up. Right now, Jill is hauling eight pounds of clams across the city of Ottawa to prepare her New England Clam Chowder for the American Feast. Here in New York, the research is complete, and nearly all the recipes are assembled for the Canadian Feast on Sunday.

Email ThisBlogThis!Share to TwitterShare to FacebookShare to Pinterest
Labels: An American-Canadian Cooking Project, Cooking with Jill in Canada, Nanaimo Bar, Quick and Easy

this nanaimo bar looks so decadent! Can't wait to see the feast on Sunday!

Looking forward to the feast! Your Nanaimo bar looks perfect. It's got to have a million or so calories, but it's all in the cause of international friendship!

Hi Veron and Lydia - it's been an interesting prep day. Things were going along fine, but tonight as I started to assemble the butter tarts, my oven decided to start smoking. Still trying to clear the haze -- at least the butter tarts look okay! The things we do for culinary diplomacy!