A Salad for a Grand New York Hotel: 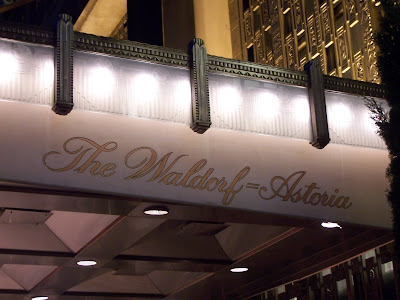 As our research on The American-Canadian Cooking Project continues, Jill has shrewdly decided to spend a few sunny days in Florida. I’m truly envious as I brave sub-zero temperatures in the Northeast. Before her departure, Jill sends in another installment in her research into American regional cuisine. She writes:

Next on my list is Waldorf salad. I'm pretty sure I know something about it....mayo, apples, celery, named after the hotel? And I know I've heard Ella Fitzgerald sing about it on my Cole Porter songbook CD. It also occurs to me that unlike Boston brown bread or New England clam chowder, which evolved from traditional English or French techniques and recipes, adapted to the kitchens of early New England and incorporating ingredients plentiful in the region, Waldorf salad could be "truly" American. I do a little digging to test this hypothesis.

My research confirms that Waldorf salad appeared on the culinary scene in the late 19th century, when Oscar Tschirky, the maitre d'hotel of the Waldorf-Astoria in New York, is said to have created the dish for a party to celebrate the hotel's opening in 1893. The original recipe consisted of chopped raw apples and celery mixed with "a good mayonnaise" (to quote Tschirky's 1896 cookbook). The dish quickly became common in other hotel restaurants, and walnuts soon became a standard ingredient.

As for the origins of Waldorf salad, none of the sources I found indicated any particular history or connections. Fruits salads are said to have emerged as a dish in the mid-1800s, so presumably Waldorf salad comes out of that heritage. Given the mayonnaise base and crunchy vegetables, it reminds me a bit of the classic French salad, celery root remoulade, but I didn't find anything to suggest that was Tschirky's inspiration. So, on the basis on my not-so-extensive research, I've decided that my hypothesis is confirmed.

Today, there seem to be endless variations of the dish, building on the classic trilogy of mayonnaise, apples and celery. Raisins or grapes are frequent additions. I found recipes for chicken Waldorf salad, Asian Waldorf salad, and cranberry Waldorf salad, just to name a few. At its best, Waldorf salad appears to be a crisp, refreshing side dish. And, at its...well, more creative... it can include whipped topping and Jell-O, conjuring up images of 1950s luncheons.

What is so interesting to me about this American-Canadian Cooking Project is that Jill is discovering information and anecdotes about my national cuisine that I never knew. We have yet to decide if I’ve uncovered anything surprising for Jill about Canadian cookery.

Jill’s current investigation intrigues me. The Waldorf-Astoria is just a short distance from my place of business on the east side of Manhattan, and I decide to take a walk over. After some additional sniffing around, I discover that Waldorf Salad is still served, now 114 years later, at Oscar’s American Brasserie at the Waldorf-Astoria. Oscar’s honors the memory of Tschirky, who became synonymous with the style and hospitality of the Waldorf. “Oscar’s Waldorf Salad” is priced at $9.00 and comes with Granny Smith and Gala Apples with Creamy Walnut Dressing, and no Jell-O whatsoever. Mr. Tschirky, or “Oscar of the Waldorf” as he was called, would be proud.

I have to tell ya, I'm impressed that you two are actually following through with this project. You two are so dedicated I think the results are going to be impressive!

It has been so cold in NY hasn't it? When I left for school the other day at 6am (I KNOW, it's early) it was -8F with the wind chill. I personally think my professor should give me extra credit for leaving the house in those conditions!

Ari, Keep your fingers cross -- I still have one main dish and two sweets to finish researching, none of which I have practiced making yet! I'm finding that Canadians are really passionate about certain foods.

I don't leave much later than you in the morning, and it has been bitter. Glad for the early touch of spring we've finally gotten today!