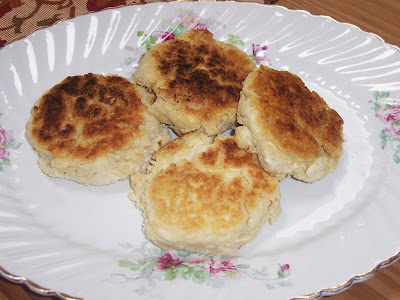 Jill’s productive trial-run with Boston Brown Bread reminds me that perhaps I should practice a bit before my guests arrive on March 18th to taste the results of our American-Canadian Cooking Project. I’m just back from another long flight, and not feeling particularly ambitious, so I decide on Bannock Bread for my maiden Canadian culinary venture, since the ingredients are all at hand.

First, I make a critical decision. While Canadian Bannock is often traditionally cooked over an open flame, I will not be lighting a camp fire in the kitchen – it’s bad for the homeowners insurance and is likely to wreck the countertops. Fortunately, frying is an acceptable option, so I haul out the skillet and choose a recipe from Canadian Living, attributed to the Cree writer Terrance Armstrong. 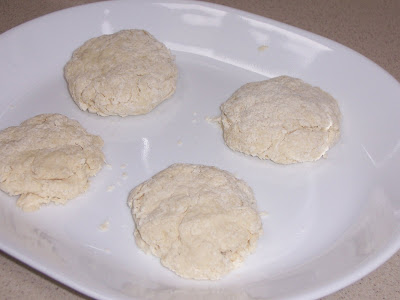 I’ve done some additional research on Bannock which helps my overall understanding of the recipe as I assemble the simple selection of ingredients. Harold McGee says in On Food and Cooking that thin flatbreads were the original breads of history, and mentions an oatcake called Bannock that originated in Scotland. The Oxford Companion to Food also traces Bannock back to the highlands of Britain and says an English-Latin word book of 1483 translates the term as “hearth bread” or “baked bread in the ashes.”

Dorothy Duncan writes in Nothing More Comforting: Canada’s Heritage Food (Dundurn Press, 2003) that Canadian settlers baked dough comprised of flour and water over an open flame, or on griddles, and the pioneer housekeeper relied on baking powder as a dependable leavening agent. Much like me, people would use what ingredients they had on hand, but wheat was particularly plentiful. In the Native cultures of Canada, Bannock seems to have taken on legendary qualities, remembered for its nourishment, and I even come across the story of one woman who says she was told more than 30 years ago she could not marry a Metis Cree man until she proved to his sisters that she could make good Bannock. 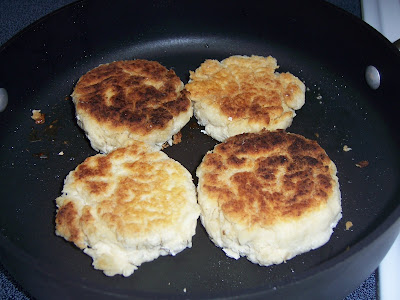 The Bannock dough assembles in seconds with basic ingredients being flour, baking powder, salt and sugar. In fact, the ingredients are almost identical to those found in a recipe for Baking Powder Biscuits found in James Beard’s American Cookery. The main difference is that the dough is formed into patties and fried in a greased skillet. 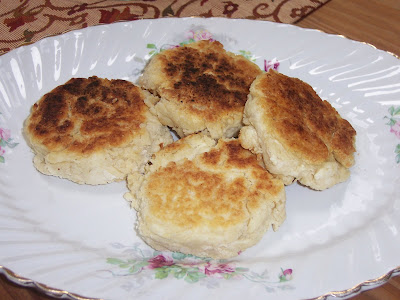 The patties are fried about 4 minutes on each side. Frying gives each loaf a crisp, golden crust that smells slightly nutty. I sample the results. The bread is dense, and even a little heavy. It resembles an English muffin or crumpet and tastes a bit like an old-fashioned breakfast biscuit, so I slap a generous pat of butter on the hot loaf. I’m not entirely satisfied with the flavor, as my loaves taste a touch bland. I’ve come across some recipes that add milk, raisins or currants and cut lard or butter into the dough, which is likely to create a more tender structure. I decide to do a little more prospecting for the perfect bannock recipe.

Meanwhile, I learn that Jill is submerged in research on New England Clam Chowder.

Posted by T.W. Barritt at Culinary Types at 5:34 PM

Email ThisBlogThis!Share to TwitterShare to FacebookShare to Pinterest
Labels: An American-Canadian Cooking Project, Bannock, Bread, Cooking with Jill in Canada

I'm enjoying reading about your Canadian-American cooking project. As an American married to a Canadian, we do a lot of that kind of thing right here at home! I've never made Bannock bread, though, and I love learning a bit about the history of it.

Thanks, Lydia - It's a fascinating process, but I'm certainly at a disadvantage. While I've got dozens of classic American cookbooks, learning about Canadian cuisine is like a treasure hunt for me!

Bannock bread...that looks especially tempting specially if you slap that butter on it. Yeh I agree your homeowner insurance will not be too happy if you start a campfire indoors. :D

The whole notion of a single Canadian cuisine is as absurd as the idea of a single "American" cuisine, of course. There is the native Canadian (smoked fish and more fish), and the wonderful foods of French heritage, and great Asian dishes that are popular on the west coast of Canada.... this could be a long project!