A Luncheon for President's Day 2007 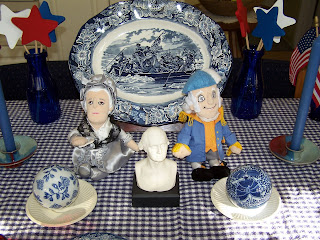 Pass the patriotism, and have another helping of history. I’ve long wondered how best to mark President’s Day, the annual celebration of George Washington’s Birthday in the United States. The idea of a three-day department store sale seemed so insufficient to acknowledge a multifaceted man who was patriot, military strategist, spymaster, gentleman farmer, public servant, statesman and diplomat. But there’s a rich culinary history behind America’s Founding Father, and two years ago I came up with the idea of a President’s Day Luncheon to research, prepare and taste the foods that might have been on the table of the legendary man who was the first President of the United States from 1789 to 1797. George Washington loved food and wine, and this meal – with its distinctive ingredients and flavors of the American Colonial period – which I shared with my family today, invokes his legacy and spirit. 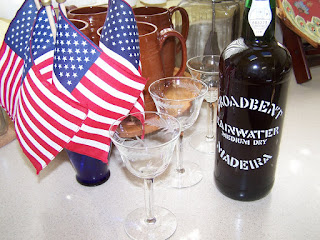 Madeira Wine: The island of Madeira was discovered by a sea captain in 1419, approximately 400 miles off the coast of Casablanca, Morocco. The island was densely wooded, and the sea captain burned the island to clear it. It was believed that the smoke and ash from the fire created the smoky taste of Madeira wines produced on the island, but this is most likely a legend. Madeira wine was very popular in the American Colonies, and it was considered a patriotic drink, because it came from Africa and required no tax from Great Britain. Madeira is a fortified wine which means alcoholic spirit is added to stop fermentation and preserve the wine. For that reason, it traveled well during long ocean voyages and kept well in the wine cellars of American colonists. Thomas Jefferson stocked his first wine cellar with an ample supply of Madeira. 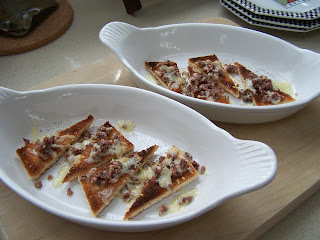 Anchovy Toasts: This recipe for anchovies on toast points sprinkled with grated cheese and broiled is attributed to “The Virginia Housewife” by Mary Randolph, a popular cookbook in early America. 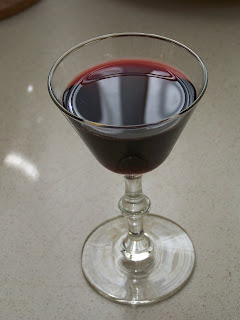 Claret: According to author and wine expert John Hailman, George Washington was fond of Claret, a wine from the Bordeaux region of France, but also a term used to describe any light red wine. It is the first wine ever mentioned by wine connoisseur Thomas Jefferson. Hailman recounts a meal in 1780 which lasted many hours during which Washington and the French Marquis de Chastellux engaged in many celebratory toasts and glasses of wine. Veal Rice Pie Enjoyed by George and Martha Washington: There are a number of veal recipes and instructions for “veale pie” listed in “Martha Washington’s Booke of Cookery” transcribed by Karen Hess, a collection of the First Lady’s handwritten family recipes. As the Mount Vernon estate was a working farm, it is likely that veal would have been served often. The ingredients of potatoes, tomatoes, rice and sliced hardboiled eggs would have been common on the plantation, and could have been assembled from a variety of leftovers. 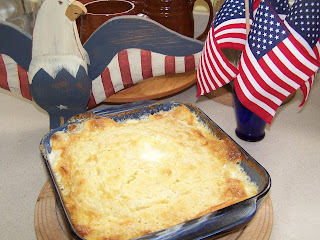 Thomas Jefferson’s Favorite Corn Bread: Thomas Jefferson often dined with George and Martha Washington, and was a noted gourmet. This recipe is a cross between a corn pudding and a corn bread, and is similar in technique to Indian pudding, where cream is poured into the center of the batter, resulting in a baked custard consistency. Jefferson recorded in his Farm Book the many vegetables – including corn – grown at his home Monticello in Virginia, and the archives of the estate mention that cornbread was served for breakfast and the family was fond of corn meal. 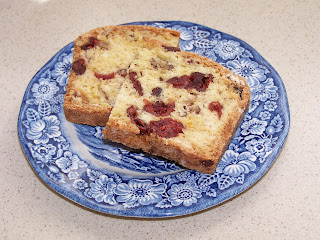 Samuel Fraunces Cranberry Bread: This loaf recipe, flavored with cranberry and orange is named for Samuel Fraunces, the owner of Fraunces Tavern on Pearl Street in Lower Manhattan. On December 4, 1783, General George Washington held a farewell dinner for his officers at the Long Room at Fraunces Tavern, marking the conclusion of the American Revolutionary War. Washington thought Samuel Fraunces to be an excellent cook, and eventually made him the steward of his presidential home in New York City. 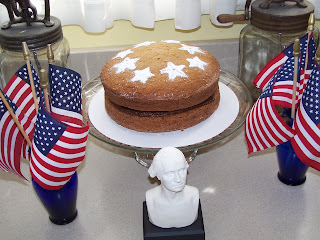 Washington Cake: According to an 1843 newspaper article, this cake “was a favorite at the table of General Washington,” but other sources identify a similar recipe as “Washington Pie” a layer cake with a jam filling that was baked to celebrate George Washington’s birthday beginning just before the American Civil War and into the early 20th century. It was likely called a pie, because the two layers were thinner, and often baked in pie tins. A similar style cake with custard filling became the Boston Cream Pie. A variety of patriotic confections and “Washington Cakes” were popular in the new nation, with a number of pound cake recipes with currants associated with George Washington that evolved from the traditional “Queen’s Cake.” This cake includes flavorings of apple juice, nutmeg and cinnamon, and a filling of apple butter, as apples were a common ingredient in the Colonial kitchen. The recipe suggests that you can use a combination of white flour, wheat flour and cornmeal if you’d like it to taste like an 1830’s version of the cake. I did just, that and the thick batter tasted nutty and sweet, much like a spice cake.

Posted by T.W. Barritt at Culinary Types at 5:05 PM

This is an impressive preparation for President's day. My favorite is the anchovy toasts... of course I can never resist great corn bread too. I love that you have little historical nuggets with each offering.

This is a fantastic post, T.W. The historical background is enlightening, and the recipes and photos are great. I'm feeling an affinity with Thomas Jefferson on this one. I didn't think corn bread could be improved upon, but a "custard consistency" sounds divine.

You really did a wonderful job of celebrating-so many dishes1 This is a great celebration indeed!

Thanks, all. It was a great tribute to George.

Veron, I think the anchovy toasts were a favorite of mine, very savory.

Susan, pouring cream into the center of corn bread does something pretty amazing to the dish!

I've learned a lot with it, such interesting recipes!
The veal with tomatoes, potatoes and eggs is similar to a dish we make here, that is of Portuguese origin (Brazil were a Portuguese colony for many, many years). The difference is we use cod instead of veal.

Oh, my favorite was the Washington cake. :)

Thanks so much, Patricia. It's so interesting to hear that you have a similar dish in Brazil. I would love to see that recipe. The cake was pretty tasty!

TW, I just bumped into your site, and I love it!! Great idea for us food/history buffs. I have another project for you---read "Farmer Boy" by Laura Ingalls Wilder, and make a meal from all of the delicious foods the boy enjoys in his day. The book made me so hungry, and I'm desperate to learn how to make doughnuts they way they were made traditionally. It's a mouthwatering read!!!