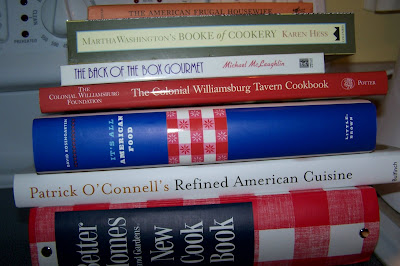 Me and my big, hungry mouth. I’m the one who suggested that Jill in Ottawa and I each research and cook a dish authentic to the homeland of the other. Now, I’ve got to come up with a uniquely American dish -- at least something appetizing enough that Jill will want to eat it. Take-out, while pervasively American, doesn’t count since there’s no cooking involved. And, I’m a little concerned that journalist Michael Pollan of “The Omnivore’s Dilemma” is getting a lot of ink lately claiming that America has no food culture whatsoever.

I turn to my vast cookbook library, and consult the experts. Should I focus on the cuisine of New York? David Rosengarten’s “It’s All American Food” suggests Buffalo Chicken Wings and New York Cheese Cake, but I’m not sure that bar snacks and dessert really count as cooking. Although, that’s where many of us Yanks get most of our essential nutrients.

Perhaps “Suburban Cuisine?” That is, after all, my ethnic food. I check “The Back of The Box Gourmet” and the “Better Homes and Gardens New Cook Book.” But most of the recipes in the circa 1953 “Better Homes” look like Easy Bake Oven food, and while there are some tasty entrees in “Back of the Box,” Jill’s got a sophisticated palate, and I’m not sure she’ll tolerate Campbell’s Soup Green Bean Casserole or Lipton Onion Soup “Souperiour Meat Loaf.” There are many historic American recipes, and “Martha Washington’s Booke of Cookery” contains dozens. For a moment, I consider “Martha Washington’s Great Cake” until I see that the recipe calls for 40 eggs – separated – along with four pounds of butter, and four pounds of sugar. A bit time intensive, and heavy, unless you’re expecting 60 people for dessert.

My search leaves me perplexed, with a slight case of indigestion. So, I ask Jill what she thinks is classic American fare. She writes:

What comes to mind when I think about American food? Good question. Rather than considering the topic deeply, I decided simply to go with the first five things that popped into my head, unmediated by notions of good taste (see #2) or research into whether these foods really are American. Here's my list:

Of course, I have to ask you the same question about Canadian food. This should be particularly challenging, because, as all self-righteous Canadians like to attest, Americans know absolutely nothing about Canada!

Well, I have spent a good deal of time in Canada’s Prairie Provinces consuming doughnuts and club sandwiches, but for the moment I take a pass on the question of Canada’s cuisine, so I can solve my American culinary dilemma.

My fellow food bloggers chime in with ideas. Veronica, the recently self-confessed “hopeless carnivore” puts aside the bubbling beakers in her Test Kitchen, and suggests: "How about shrimp and grits...is that American? How about squirrel pot pie? Just kidding!"

From the West Coast, The Food Blogga offers this: “When I taught, I had some foreign exchange students who were eager to try some classic American foods they had heard about. Here are a few: BBQ, Mac n' Cheese, hoagies, burgers 'n fries, meatloaf, doughnuts, apple pie, & yes, pizza. Okay, they're not hi-brow, but they are quintessentially American!”

It is my friend, “Lee Sloan,” a Grande Dame of food and wine, who hits the nail on the head. Over Chestnut-Fennel Soup at Terrence Brennan’s Picholine in New York, she sits back, pauses thoughtfully and then pronounces matter-of-factly, “There is no distinctly American food. America is made up of regional dishes.”

As always – when it comes to food – Lee is right. And, Jill’s cooking assignment may have just gotten somewhat larger in scope. I now have the makings of a plan.

It IS hard to come up with a distinctly American dish! I thought of the same things others suggested: fried chicken, mac n'cheese, pumpkin pie, apple cobbler, hamburgers. Now that I think of it, I think your friend is right: American cuisine is a hodgepodge of different cultures. Even Native American food isn't "American."

You could always make a traditional dish then change things up a bit. Like turning regular burgers into lamb burgers on brioche buns with homemade fries or something. :)

Whatever you decide I look forward to hearing about it!

I agree with your friend Lee, it might be more regional than it is simply American. Just like in China, there is Shanghaise,Cantonese and Szechuan etc...
Looks like you got your work cut out for you...

I'm not American, maybe I shouldn't comment on this, but of the dishes you listed, I'd go with Pumpkin Pie - it always comes to my mind when I think of American food! ;)

Hrm...VERY interesting question. Globally, I'd bet that Burger and Fries would be represenative of American Cuisine based on the McCrappy King Burger franchises we've exported