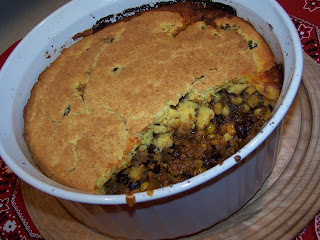 It is holiday baking day and the kitchen is in an uproar. The live Handel broadcast on the radio does little to mask the chaos. Sheet pans and mixing bowls are scattered about, and the sink is full. Hallelujah!

I’ve been surrounded by food all day, but I’m already thinking about Sunday Supper. I’ve made my selection on page 102 of the Joy of Cooking, and it’s a little touch of Mexico right here in suburban Long Island – Corn Bread Tamale Pie.

While I might try to convince myself that supper will be like a sojourn South of the Border, there’s actually nothing authentic about Corn Bread Tamale Pie. The Oxford Encyclopedia of Food and Drink in America says it is part of the group of American foods that were “invented outside the ethnic communities they refer to.”

The Food Timeline quotes the Encyclopedia of American Food and Drink as saying that Captain John Smith made reference to a tamale-style dish in 1612 and that the term Tamale Pie first appeared in 1911. Perhaps this recipe is a distant cousin of the “hot tamale” which the Oxford Encyclopedia describes as a popular southern street snack of the late 19th and early 20th century, made with larded cornmeal. Mexican American women were said to make hot tamales in large quantities months before festivals such as Christmas. Heck, it’s the holiday season. That’s all the connection I need!

Certainly casseroles of this type continue to arouse appetites and inspire great interest. The December 2006 issue of Saveur has a lip-smacking feature on the history of casseroles which features a recipe for Tamale Pie (aptly described as an “American classic”) along with such chic suburban suppers as Tuna-Noodle Casserole and Chicken Divan. Joy of Cooking does its share of gushing on all aspects of savory pies, and extols the virtues of topping a mixture of meat and vegetables with a variety of crusts, including homemade biscuit dough.

Scanning the recipe, I can see its attributes immediately. The preparation takes no time, and many of the ingredients are at hand in the pantry. Browning ground beef and onion is the first step, so this is a job for the venerable Sunbeam Electric Frying Pan. No suburban cook should be without one. I brown the beef and onions and toss in black beans, corn, tomato sauce, chili powder and cumin. There’s very little fat, and the dish is packed with fiber. The topper is a thick paste of cornmeal, egg and milk. I stare into the oven and watch as the molten bean sauce creates fissures and eruptions across the rugged topography of the cornbread topping.

Finally, the moment of truth, and I dip a large spoon into the golden crust. The ragu of black beans and corn looks a ladle-full of colorful confetti and the cumin and chili powder does the rumba with the sunny yellow goodness of the cornbread. Who needs authentic Southwestern cuisine? I can get that any night in New York City. I may still have a long way to go before I get to Mexico, but Corn Bread Tamale pie spices up Sunday night supper with the flair of a fiesta! Maracas for everyone!

I don't eat red meat, but my husband would like this a lot!

You know, I think it could easily be adapted as a vegetarian dish, by substituting more chopped tomatoes and green pepper for the beef. Then, there are lots of chicken varieties that would work.

Patricia is right , it looks very yummy and would make for a hearty meal. I would love cornbread over anything and the beef and onions sound really good!