The Culinary Celebrity of the 19th Century 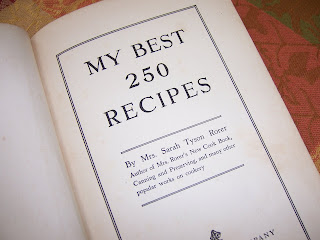 The small, battered, cornflower blue book sits atop a dusty pile in an antique store in Central Pennsylvania. It is the day after Thanksgiving and we are foraging for a “find” amidst vintage postcards, Depression glass, and a frightening tableau of stuffed squirrels dressed as baseball players.

I flip through the brittle, yellowed pages. The publisher is Arnold and Company of Philadelphia and the copyright date is 1907. This cookbook is ninety-nine years old.

But who is Mrs. Rorer? Copyright 1907 by Sarah Tyson Rorer. The name has a ring of authority and expertise, but I don’t recognize it. Anyone with their name on a cookbook must have some notoriety. Martha Stewart and Betty Crocker come to mind. And, anyone with 250 “best recipes” must have had some reputation to speak of. There are passing references to her lectures and articles. Yet, the name is a mystery to me.

The dealer sells me the book for a fair price and I spend some time exploring the recipes. There is everything a home cook could ask for: My Best Twenty Soups, My Best Twenty Ways of Cooking Meat, and even My Best Twenty Left-Overs. The advice is practical and to the point: “As a rule left-overs are extravagances; they show thoughtless buying; but to utilize them is the stronghold of every housewife.”

The pages of the cookbook are worn and stained, and the binding is slightly cracked. Inside the back cover, a list of ingredients is scribbled in pencil: bay leaves, cream, “cutsup,” walnut, mace, bread, apples and “magic yeast.” In another spot, a hand-written menu is scribbled: pork chops, sweet potatoes, cabbage fried, sliced tomatoes. What recipe or family dinner might these notes have represented?

Back home, I start my investigation in earnest, and very quickly uncover the history of Mrs. Sarah Rorer. Some refer to her as the first American dietitian. She was, in fact a culinary sensation of the late 19th century. If the Food Network had been around, Sarah Rorer would have been a celebrity chef with a prime time slot.

The story unfolds for me in the Oxford Encyclopedia of Food and Drink in America. The parallels between Sarah Rorer, Julia Child and Martha Stewart are fascinating. Rorer was a bored suburban housewife who started attending lectures at the Woman’s Medical College in Pennsylvania in the late 1800s. Later she took up cooking classes and eventually became an instructor and regular lecturer. She studied nutrition texts and built her expertise and reputation as a teacher and in 1883 opened the Philadelphia Cooking School. Her husband was a bit of a slacker as a provider, but eventually came to work for her at the school, making Mrs. Rorer the breadwinner in the family.

Rorer’s lectures attracted audiences of thousands and in 1886 she published her recipes and advice in Mrs. Rorer’s Philadelphia Cook Book. She authored an advice column called Table Talk in a culinary magazine, and eventually became the “domestic science editor” for The Ladies Home Journal. She held live cooking demonstrations at food expositions and eventually authored more than fifty books, booklets and promotional pamphlets.

Maybe modern day foodies have forgotten her, but Sarah Rorer and her little book of Best 250 Recipes is a slice of culinary history that now has a place of honor on my cookbook shelf. She turned culinary expertise into a vocation and amassed a huge following. As a woman in the 19th century, she was a food pioneer, and uniquely American as well for the ingenuity she showed in reaching a mass audience. I suspect that most food bloggers have a little bit of Sarah Rorer's spirit in their genetic makeup.

This is such an interesting post, I had never heard of her before either but I think it's just fantastic that you took the time to actually research the woman who wrote this book. I personally love old cookbooks, especially handwritten ones. Flipping through the ingredients and cook notes feels like you're getting to know the person, as if somehow "who we are" is connected to the food we love to prepare. Actually, I think there is some truth in that, dont you?