Coffee and Hope in the French Market 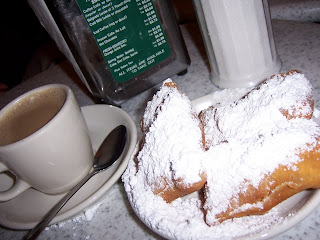 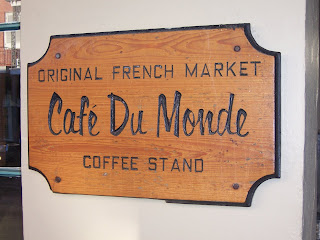 Jazz musicians in New Orleans sing of optimism, but the road back for this city appears incredibly challenging.

The big storm passed more than a year ago, but the aftermath is still evident no matter where you look. Historic buildings are boarded up and the narrow streets of the French Quarter are eerily empty. The devastated 9th Ward is a war zone, a patchwork of leveled plots and hollowed-out shells of homes that were once inhabited by families. A solitary honey-colored feline, flee-bitten and desolate, huddles on the pavement in a catatonic state.

So much about the future of New Orleans is unknown.

Still, certain institutions persevere. Restaurants in the French quarter serve distinctive Cajun fare and Creole cooking to a city that is at far less than capacity. At Café Amelie on Royal Street, Chef Jerry Mixon’s doors are open. Mixon grew up in St. Bernhard, learned to cook from his mother and trained under Paul Prudhomme. Each day at this historic carriage house, he prepares rich, lively gumbo – dense with pulled chicken and andouille sausage – that simmers in the soup pot for six hours and builds to a spicy sensual crescendo.

And, at the French Market, hot coffee and chicory and crispy beignets are offered 24-hours-a day, seven days a week at Café Du Monde.

I’ve spent much of the week with colleagues at a business meeting in New Orleans. Several of us arrive around 10 o’clock on a weeknight evening at Café Du Monde for an after-dinner treat. We have walked along historic Jackson Square, past flickering gas lights and wrought iron balconies and cross Decatur, where the beams from car lights illuminate the November night.

Quaintly referred to as “the original French coffee stand,” Café Du Monde sits on a large triangular plot near the Mississippi River and was established in New Orleans in 1862. For perspective, that’s a year after the American Civil War began. The signature offering is a coffee and chicory blend, served black or “au lait” which means the coffee is mixed half and half with hot milk. Chicory was added to coffee as an extender by the French during the French civil war when beans were scarce. Acadians from Nova Scotia brought the drink to Louisiana when they settled there.

In the evening, both the small indoor café and the outdoor café are bustling with activity. The seating area is covered by a green-striped awning. We push together two tables, and order coffee and chicory and plates of beignets stacked high and covered with drifts of powdered sugar. Warm tropical breezes dip under the awning.

Simply put, a beignet is a pillow-shaped, deep fried doughnut. Beignets are often referred to as French-style doughnuts and were also brought to Louisiana by the Acadians. Recipes call for whole milk, shortening or lard, yeast and oil for deep frying. Beignets are rich, and well worth the caloric investment.

They say a visit to Café Du Monde is like no other culinary experience in the world. The resident food maven in our party extols the virtues of dunking beignets, and it is intriguing to watch the doughy cake absorb the caramel-colored brew. The powdered sugar sweetens the coffee and adds a touch of luxury to the silkiness of the hot milk. The Boss is a first-timer to New Orleans and Café Du Monde. He attacks his beignets with gusto. The powdered sugar flies, and he looks like he just stepped out of a driving snow storm.

Two day later, I return alone, early in the morning. It has turned uncharacteristically cold for Louisiana, wind-chill tears sting my face, and the palm trees strain against frigid gusts.

Inside the cafe, I take a table amidst tourists, faithful locals, and even a few vagrants there to keep warm. There are remnants of powdered sugar on the floor. French doors line the façade and in warmer weather would open out onto Decatur. There is an old-fashioned upright rectangular paper napkin dispenser on the gray melamine table. Historic black and white photos line the wall.

The server arrives with my order precariously propped on a massive tray crowded with coffee cups and beignets. She slides onto the table a battered pink plastic tray with the name “Kim” stamped on it, where I’m supposed to leave my payment. The bill is a whopping $3.50 for what many consider the best breakfast on the planet.

The beignets come in servings of three and are more dense, flavorful and crisper than a doughnut. I have sworn that I won’t eat them all, but quickly renege on my word. I pull a chunk of the golden beignet and splash it in the hot foamy drink. There are many complex flavors – earthy, sweet, yeasty, robust, light and smooth all at once. It is like a soothing milk shake with a kick. It gives me some fortification for the long day ahead as I head for my next meeting. Others are edging their way into the crowded café.

Where there is a good cup of coffee and tradition, there is hope, and perhaps a bit of restorative power.

My husband and I spent many a wonderful night sitting at the Cafe Du Mond, drinking coffee and eating beignets. Sigh. Thank you for bringing back such beautiful memories!

I usually eat very healthfully but when I go to NO, I usually do eat a beigniet from CDM. Yum!!! Just don't inhale when you put it to your mouth! :-)

Waaah!!!! I miss the beignets from Cafe Du Monde. I remember when I first ordered it, the hubby didn't want any. I ordered six pieces anyway which was a good thing since after his first bite I had a hard time keeping him away from the rest. We ended up eating 3 each.