Venus on the Half-Shell and Pizza at Ponte Vecchio 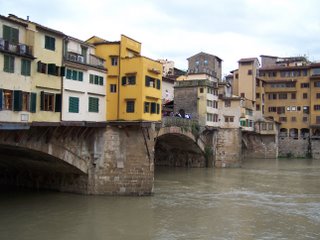 I’m standing in the Piazza Della Signoria at 9:00 a.m. when the doors to the Pallazzo Vechhio swing open. This is the “Old Palace” built in 1322 which still serves as Florence’s town hall. It looks like a small fortress on the outside, but inside are palatial rooms decorated in grand style for Duke Cosimo I.

After that, it is a short walk to the Uffizi which was originally built as a suite of offices for Duke Cosimo’s staff. The Medici family turned the Uffizi into an art gallery, and it is now one of the oldest art museums in the world. People line up at the Uffizi like they’re selling tickets for a Beatles reunion. It just proves art appreciation is not dead. Of course, it doesn’t hurt if you’ve got the greatest Renaissance art collection in the world. Fortunately, I’ve shelled out the extra cash for an advanced ticket, and the speed of entry is worth the price of admission.

I check out the gallery maps and make tracks to the Botticelli exhibit hall. I’ve probably had a crush on Botticelli’s “Venus” since high school art history class, and there she is, big as life in all her flowing golden hair and naked splendor. Here in Italy, the Roman Goddess of Love is an icon, and her face even graces the 10 cent Euro coin. If I were in charge, I would have given her the more prestigious 2 Euro coin. Botticelli’s colors are brilliant, even after more than 500 years, and the sweet-faced Venus looks serene as she is whisked across the Aegean Sea on an open clam shell by the winds, and sent into the arms of waiting nymphs.

Once you’re inside the gate, one can, and should, spend hours exploring the Uffizi. I emerge in late afternoon and head towards the Ponte Vechhio or Old Bridge that crosses the Arno River. It is the oldest bridge in Florence, built in 1345. Once it was home to goldsmiths and now is the place of business for jewelry dealers. The bridge is crowded with tourists seeking bargains, but I’m in search of an early dinner. I settle on “Golden View Open Bar Ristorante.” (http://www.goldenviewopenbar.com/) True, the name is hardly authentic Italian, but the dining room riverside view of the Ponte Vechhio is unmatched. Even as rain pours down, the mustard colored medieval workshops clustered along the bridge are radiant.

I order Chianti and Pizza Fiorentino which is adorned with mushrooms, proscuitto and Tuscan salami. The crust is thin and crisp, and the earthy mushrooms and salty ham do a bit of a Tuscan love dance on my palate. I conclude the meal with a Calzone Goloso, which I’m certain is dedicated to the Goddess of Love. It is a pastry calzone, stuffed with mascarpone cheese, covered in chocolate Grenache and sprinkled with pine nuts. The waiter gives me an after-dinner cordial on the house, a potent golden Limoncello, perhaps as a tribute to the goldsmiths of the Ponte Vecchio.