Apicius: The Culinary Institute of Florence 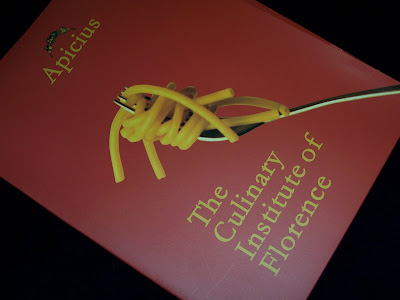 The entrance to Apicius, via Guelfa 85 in Florence, is slightly recessed from the street. I check in ahead of schedule and I am issued a pack of recipes for my classes and an apron with the name of the institution and a crown of fruits and vegetables printed across the top.

Apicius was an ancient Roman chef and the Culinary Institute of Florence is dedicated to his tradition. The décor is soft colors, light sandstone brick walls and modern modular seating. I am introduced to Roberto, my chef instructor who leads me to a bright galley kitchen that opens up onto a small patio. Our subject is Regional Italian Cuisine and we will be covering dishes from Milan, Lombardia, Rome and Sicily. I quickly learn that Roberto was born in Australia, but his parents were both from Sicily. He looks a bit like a pirate, with bearded stubble, hair in a pony tail and chef’s hat slung back over his head. He is friendly, athletic and full of information.

We begin by preparing a beef stock to use with several of the dishes. I dice the onions too small and they brown too quickly. Roberto is quick to remind me that vegetables should be cut evenly to cook evenly.

While the stock is simmering, we turn to Crostini di Polenta. Roberto teaches me different ways to flavor the yellow grain which will serve as the base for our crostini appetizer. Along the way, he peppers the conversation with Italian food lore. In “the old days,” polenta was used as the base for many savory meat dishes because it was portable, and easily cooked with water. It comes from the Northern regions like Milan that grow maize, while dishes like risotto became prevalent in regions that were favorable to rice. I clean chubby porcini mushrooms and learn to cut cap and stem lengthwise with the grain so they will not disintegrate. We peel tomatoes and sauté them with the mushrooms and olive oil for a topping for the polenta. The corn mash is pressed into a loaf pan and left to cool.

Saltimbocca in Roman Style is tender veal pounded thin, topped with fresh sage and layered with prosciutto. It is assembled quickly and put in the refrigerator for final preparation. Roberto has spent years working in professional kitchens and offers advice on ingredient preparation and timing the elements of a meal in phases, to assure final presentation of hot food.

Roberto simmers onions, oil and just a touch of wine for a saffron risotto. I notice that he’s not vigorously stirring the broth as I’ve always assumed one should do. In fact, he’s just letting it simmer off to the side, and explains that after the initial combination of ingredients, it is better to let risotto simmer gently so as not to release too much starch from the rice. He promises me it will be creamier, and that I’ll notice the difference.

Cannoli Siciliani is a southern Italian confection. We mix together dough that is moistened with Marsala wine and lard. It doesn’t quite hold together at first, but after a bit of rhythmic kneading from Roberto, it becomes smooth and pliable. I roll the dough into thin disks that are wrapped around metal tubes and dropped into hot oil. We remove the metal forms. For the filling, ricotta cheese is whisked together with shaved chocolate, candied orange peel, crushed pistachio nuts and just a hint of cinnamon. I pipe the filling into the golden pastry tunnels which now look remarkably like what I’ve seen in the top Italian bakeries.

For the final steps, the veal is sautéed briefly in oil and wine. The polenta is sliced into rectangles and deep fried in oil until it is bronze and crisp. We top the rectangles with the mushrooms and tomatoes and eat the crostini as the rest of the meal is completed. The taste is like the sun caressing the earth.

The food is plated and we sit down to eat in the dining area with a glass of red wine. The salt and sage of the veal indeed pops on the tongue, which is the translation for the name of the recipe. The risotto is creamy gold, you can taste the layers of cheese, wine and broth, and each tender pearl of rice is evident on the palate. The cannoli completes our cook’s tour of Italy – crisp pastry complements cheese and cinnamon for a sweet Sicilian holiday.

The meal is “buono” but I need exercise after such a feast. For the afternoon, I visit San Lorenzo, which was the parish church of the Medici family, Santa Maria Novella, with its mysterious Green Cloister painted with ancient biblical frescos, and Palazzo Medici Riccardi, the flamboyant palace home of the Medici for 100 years.

Email ThisBlogThis!Share to TwitterShare to FacebookShare to Pinterest
Labels: Apicius The Culinary Institute of Florence, Chefs, Florence, The Food of Italy