The Cuisine of Florence and Tuscany 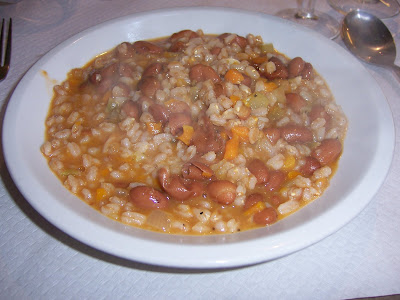 The heavy wooden door to the Dominican monastery San Marco opens at precisely 8:15 a.m. Founded in the 13th century, the Friars’ dormitories, or cell rooms, catapult me centuries into the past, far away from the clatter of modern day Florence. Each cell has a simple arched wooden door, a tiny window overlooking the cloister and a radiant fresco by Fra Angelico, depicting an event in the life of Christ. In all, there are 43 cells, each a rare gem of ecclesiastic art.

By 10 a.m., I arrive at Apicius (http://www.apicius.it/) for my class on the cuisine of Florence and Tuscany, and I meet my chef instructor Simone Riani. Simone is from Florence, and he began cooking as an apprentice at age 15. Today he is a chef at a restaurant near Palazzo Pitti and an instructor at the school. I will discover he is a modern Italian chef with a deep respect for tradition. Simone’s is less fluent in English, but we manage to communicate quite well, and he has a patient approach to teaching. He leads me back to the same galley kitchen where I worked on Monday and dons a tall paper toque.

We start preparation for dessert, Zuppa Inglese, translated as English Trifle, but it is different from the sherry and custard dessert I’ve prepared in the past. We mix a pastry cream on the stove, infused with vanilla bean, and soak crisp Italian biscuits in a clear cherry liqueur and Alchermes, a red liqueur with the aroma of nutmeg and cinnamon. The lady fingers are placed in the bottom of the serving dish and covered with the pastry cream, which is then sprinkled with shaved chocolate and chilled. Simone explains that Alchermes is a very old Italian liqueur that grandfathers would often drink at the end of a meal with espresso.

Pollo Fritto alla Fiorentina is actually fried chicken tenders, Florentine style, which means that sliced chicken breasts are marinated in fresh lemon juice, garlic and the best extra virgin olive oil. Simone tells me that salt, pepper and olive oil are the key ingredients in the Tuscan kitchen. In November, when the new olive oil is available, he says the food is soaked in it.

We assemble Minestra di Farro, which is a bean soup made with Farro wheat. This is a very old grain grown and used in Tuscan dishes. The grains plump fat as they are simmered with pinto beans, and the broth is scented with garlic, onion and sage.

Finally, we bread and deep fry the chicken, and assemble Fettunta o Bruschetta with bright summer tomatoes and basil, which Simone advises should be torn to avoid discoloring. Once again, the ingredients are seasoned with salt, pepper and an abundance of olive oil.

As we prepare to eat, Simone tells me there is a bit of a rivalry between French and Italian chefs. He says some Italians take offense that the French claim to have developed the recipes for béchamel sauce and onion soup when both actually originated in Italy. I decide to stay neutral on the issue. He explains his commitment to seasonal cooking, and how important he believes it is to cook the types of food that would logically be available in each season.

During the meal, Simone shows me a recently released cookbook that he and another chef at the school have collaborated on. The book is titled Innovations: New Appetites in the Tuscan Kitchen. It offers a series of trios – the traditional Tuscan recipe followed by his and his colleague’s modern variations on the classics. The photos are stunning, and the concept intrigues me, so I purchase a copy and ask Simone to inscribe it, which he does in Italian. I look forward to taking Simone’s new culinary interpretations back to my kitchen.

In the afternoon, Florence is jammed with tourists, professionals zipping through the streets on motor bikes, and shoppers crowding the high fashion shops. I squeeze into the Baptistry at Piazza di San Gionanni to admire the gold mosaic ceiling, and visit Orsanmichele, a small chapel that was once a grain market and now honors the 14 mercantile guilds of Florence. Winding through the narrow back streets of the eastern part of the city, I stop at Casa di Dante, a restored 13th century tower house which tradition says was the home of the poet Dante, author of The Divine Comedy.

Email ThisBlogThis!Share to TwitterShare to FacebookShare to Pinterest
Labels: Apicius The Culinary Institute of Florence, Chefs