Naughty, Nice and a Wicked Manhattan 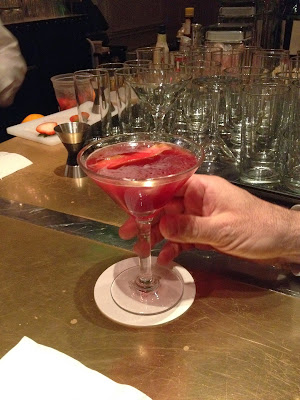 Back in the day, whenever the winter holidays rolled around, my college roommate Ford McKenzie, our respective others and I would typically celebrate the season with a trip to Jacqueline’s for champagne. It was the kind of swanky Manhattan Upper East Side locale that made you feel like celebrating simply by crossing the threshold. The proprietress, Jacqueline, was a gallic Auntie Mame-type who kept the conversation flowing and the flutes full of bubbly, whether we could afford it or not. Naughty.

Jacqueline’s is long since gone, but we’ve never stopped reminiscing about the place. In fact, we’ve probably been in search of an ultimate Christmas hangout ever since. This year, Ford serves up a solution – a visit to the cocktail lounge Two E at the Pierre Hotel on Fifth Avenue facing Central Park. A check of the website suggests that it does seem to offer that elusive blend of Old World charm, uptown sophistication and holiday bling that we’ve been seeking for years. Nice.

I enter the lobby of Two E at the prescribed meeting time, and take in the sparkling, 15-foot Christmas tree that seems to have sprouted at the center of the lounge. There’s a nice selection of cushy seating, and jazzy Christmas tunes fill the room. 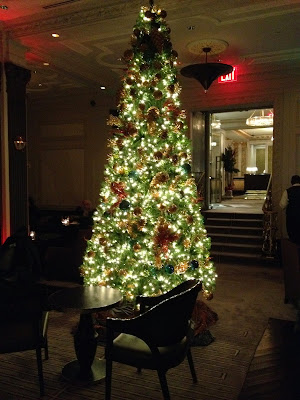 Ford is attired in his holiday best – a trim, Thom Browne winter navy suit with chalk pinstripe, custom white shirt by Maxwell's of Hong Kong, antique gold Tiffany watch, and a skinny Charvet necktie accented with a 1960s gold Mad Men-style tie clip. It is hard to tell which is more merry and bright -- Ford, or the holiday tree?   He bemoans the fact that he has gained a few pounds this autumn eating too many “fat food truck lunches.”  What? Did you miss those adventures?  I did too. Somebody’s been sneaking out for food truck grub on his own. Naughty.

We’re joined by our friend Rosemary – Lesley Gore lookalike, professional de-clutterer, scourge of useless kitchen appliances and fashion forward trendsetter.  She’s swathed in black wool, adorned with a single silver brooch, and wears a furry black chapeau that is a cross between a Jackie Kennedy pillbox and a Russian Cossack hat. Nice.

Now for an important disclaimer:  we did not … repeat … NOT bring a food truck picnic into the Pierre Hotel. What kind of slobs do you take us for?

Two E is well appointed for the holidays, with a massive ginger bread house on the bar that is bigger than most Manhattan studio apartments and appears to be move-in ready. 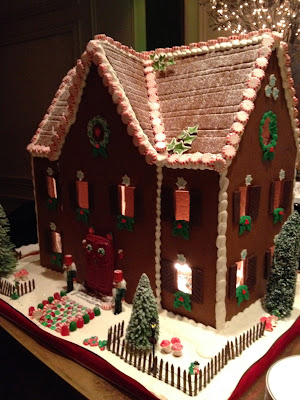 Ford’s peruses the menu and his eye goes directly to “Wicked Manhattan” a noveau culinary cocktail of Patron Angejo Tequilla, Crème de Casis, Kendal Jackson Grand Reserve Chardonnay, Peychauds Bitters and Chartreause.  It’s hardly traditional, but Ford is intrigued and heads to the bar to get more information from Paul the bartender who is happy to oblige. Paul also offers a no-fault guarantee. If Ford doesn’t like the drink, he can exchange it for a traditional Manhattan. Nice.

While Paul does not exactly fit the part of an over-the-top female French bon vivant, he is friendly and informative and mixes up that Wicked Manhattan with quite the holiday flair. 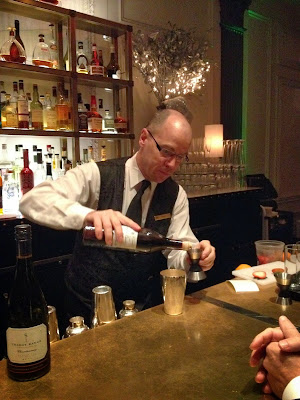 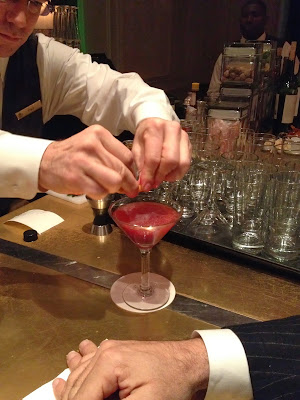 Ford succumbs to the temptation. The Wicked Manhattan is a bit fruitier than it’s predecessor, but he likes the floral scent, and wonders for a moment if he should just inhale the lush aroma. In the end, he wickedly imbibes two. Naughty. 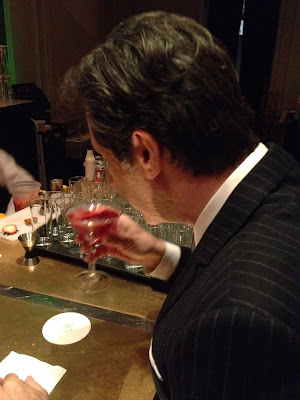 After several rounds of Wicked Manhattans, and champagne cocktails, we decide that a snack is in order. Ford declines, given his diet and all. Rosemary and I each order a serving of three Angus Beef Sliders with a side of horseradish sauce. Ford proceeds to help himself to a slider from each of our plates. Very Naughty.

As we leave the Pierre Hotel and gaze across to Central Park, the moon on the breast of the new fallen snow, gives a luster of midday to objects below.  The glare from Ford’s Mad Men tie clip and Rosemary’s brooch is blinding, but festive nonetheless.

Hours later, I arrive home, and there is a cardboard box waiting on the doorstep emblazoned with a graphic illustration of a slightly crazed pig. 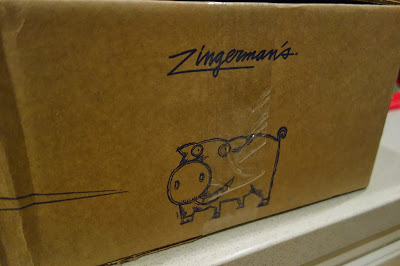 It’s an early holiday gift from Zany, Luigi and Sticky Hands in Chicago.  How exciting is this?? 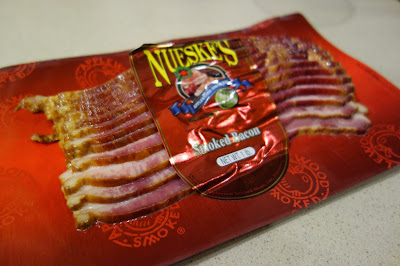 They’ve sent me a membership in the Bacon of the Month Club!! Naughty and Nice!

Ooh, you got a package of Nueske's bacon. Very, very nice.

What an enjoyable tale of a great night out filled with good friends and chic cocktails. Merry Christmas TW. Enjoy the city and all of the beauty of the season.
Sam

It's always very nice to know that some holiday traditions live on. Sounds like you've found a worthy replacement venue for the traditional holiday get-together!

What a lovely re-cap of our festive night. You will be happy to know you won't be blinded by my bling or OTT chapeau today at Ford's due to the climbing temps and having to come straight from work to the soiree. However, my shiny red raincoat is another story. Naughty or nice, that's for you to judge, but if the unsolicited comments on Ave A this morning are any indication...

A story about a hotel. Shocking.

A HAPPY EVERYTHING TO YOU, FORD and YOUR HAPPY AND MERRY COHORTS. XO

I love a good cocktail. looks like you may have found new place to enjoy good libations and a great time with friends.

Merry Christmas to you!

There seems to be just one element missing from this holiday romp, and what were you wearing, naughty:)

I know I should probably be focused on the drinks and that awesome bacon gift but, I just can't help trying to imagine what you all must have looked like dressed in your holiday garb. If Ford's picture is any indication, pretty darn Dapper:)

It sounds like you and your pals have found a worthy solution to a holiday meeting place. However, I'm thinking Paul is no replacement for Jacqueline. He looks a bit tense:)

Thank you so much for sharing your holiday get together with us T.W. As for that bacon, do I smell bacon jelly in the future? Gee, I hope not:)

Wishing you and yours a joyful and Merry Christmas T.W. Enjoy each and every moment, Louise

Louise, compared to Ford and Rosemary, I'm nowhere in the same fashion league, although I thought I looked quite presentable in a classic v-neck cashmere sweater. Now, I hadn't thought of bacon jelly, but since you mentioned it …

You charm me every time I visit here. I couldn't let the holiday pass without stopping by to wish you a Merry Christmas. Have a grand holiday, T.W.

Nothing more elegant than lots of fine black fabric and a brilliant piece of jewelry. It just sings.

Have a lovely holiday!

It sounds like a wonderful place to enjoy a holiday cocktail with friends. Have a great Christmas TW.

A Cashmere Sweater is sounding mighty "dapper" to me, T.W. Thank you...About that Bacon Jelly...