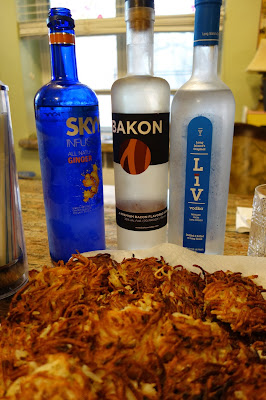 It was not yet Halloween and my BFF Amanda was already stressing over holiday preparations. Her issue? The stars and meteors had collided for the first time in 70 thousand years creating a November holiday mash-up extraordinaire – the celebration of Thanksgivukkah.

“It’s so early!” she moaned. “Hanukkah and Thanksgiving on the same day?  I love both traditions, but this is going to get messy.”

Her solution is to adhere to the traditional Thanksgiving menu (“Forget any cutesy, Thanksgiving-themed latkes. It’s not gonna happen.”), and stage a latke marathon for the remaining hours of the long holiday weekend.  She invites me for a culinary play date on Saturday.  On the menu will be latkes with sour cream. Amanda does not buy into the whole applesauce shtick.

“We might need a special cocktail to enjoy with our latkes,” Amanda suggests.

“Perhaps, a cocktail made with potato vodka?” I ask.

Her eyes light up. “Latkes and vodkas!  It’s brilliant! It even rhymes!”

Note the plural in “vodkas.”   Because “latkes” and “vodka” singular just isn’t quite as poetic.

As Amanda is the Queen of Latkes (a well-deserved reputation which she enthusiastically promotes), I take on the vodka assignment. I visit at least four liquor stores, searching for infused options that will pair well with fried food. At one point I discover an interesting ginger and lemongrass vodka and text Amanda with the news.

She responds, “Lemongrass and sour cream might not be friends? Think savory winter Hanukkah oil thoughts – what would the Maccabees do?”

So, I continue the hunt for latke-friendly vodkas.

This is not the first time I’ve made latkes with Amanda. The first episode evolved into a bacchanalia of sizzling oil, fried potato and a sampling of hundreds of variations of the traditional Hamentashen cookie.  It was so completely over the top, so deliciously frightening, so insanely caloric, that I’ve never been able to tell the story, and it remains an infamous untold Culinary Types tale.

Amanda is very particular about her latkes. Some might call her charmingly obsessive, but I think purist is the best description. 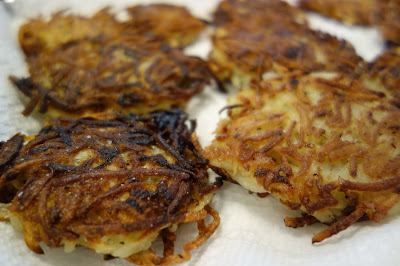 “Grandmother said, Don’t mess with potatoes and onions,” Amanda explains crisply.  “The secret is no ingredients other than potato, onion, egg, salt and MAYBE a scooch of flour.  No nonsense. Potatoes grated and squeezed dry. Hot oil. Burn to a crisp!”

Amanda has spoken.  It’s as simple as that.

I arrive for Latke Fest – packing an intriguing selection of vodkas – and the ingredients are assembled on the counter – five pounds of potatoes along with onions, eggs and flour. She explains the formula in true Food Network instructional style 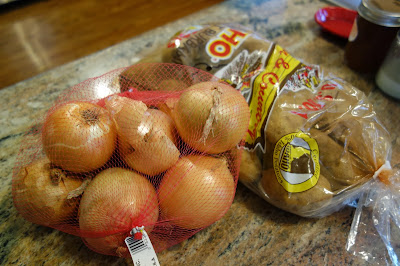 “For every pound of potato, I use about a quarter to half an onion 1/4-1/2 an onion, one egg, and maybe a tablespoon of flour,” she tells me and adds,  “The fact that some people make latkes from a mix breaks my heart.”

Here’s the recipe inspiration for Amanda’s less-is-better when it comes to latkes approach. 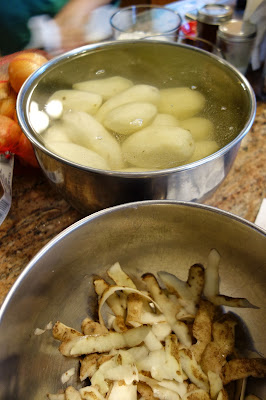 We quickly peel the potatoes and Amanda runs the spuds through the Cuisinart.   She likes the larger grate hole, which results in a longer “ropier” potato. 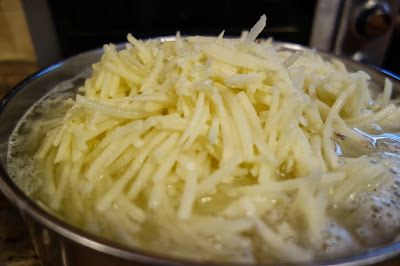 I’m assigned to incorporate the eggs, onion and seasoning into the potatoes using the most efficient kitchen tool ever created. 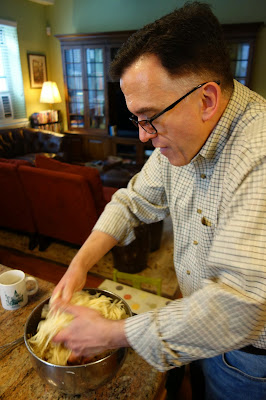 “Nothing beats clean hands,” declares Amanda, “But, women need to de-ring for the procedure. I once thought I’d lost a precious stone. It was panic time, and it would have really ruined the latkes.”

Next – with frightening speed and accuracy – she begins to scoop the potato mixture into the hot frying pan.  Hot oil sizzles, and the intoxicating smell of caramelized potato fills the kitchen. 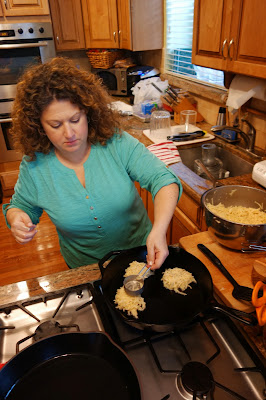 The latkes humming in the pan, they start to develop a festive, lacy edge.   As they cook, Amanda bemoans the state of latkes in America. 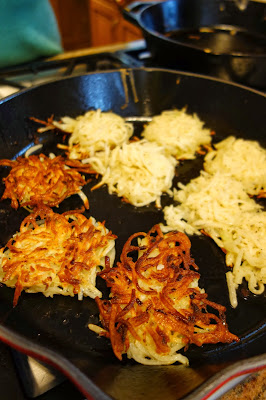 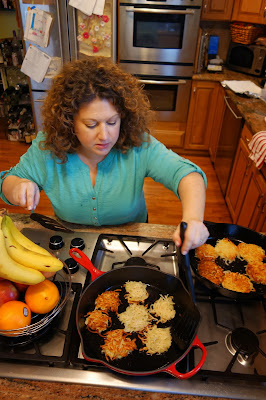 “How can you put Matzoh in latkes” she demands.  “Matzohs are a food of oppression, and will ruin a perfectly good latke.” 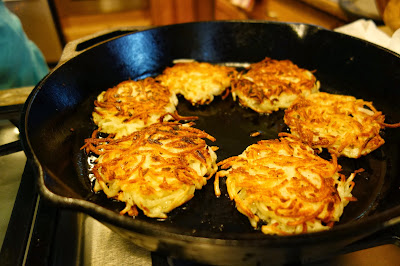 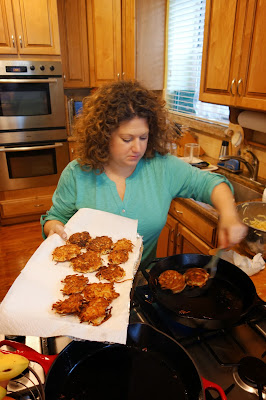 She removes the latkes from the pan, and allows them to drain on paper towels.  I sprinkle them with just a hint of salt and we commence with our pairing of latkes and vodkas. 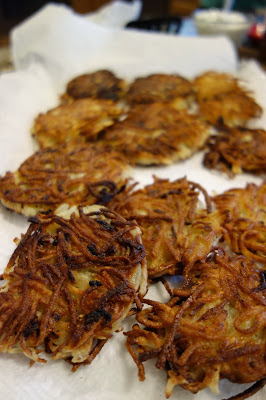 On the menu are three options:  LiV Vodka, made from Long Island Potatoes for the fan of locally-produced spirits, Skyy Vodka infused with real ginger(sans lemongrass), and a carnivorous delight called “Bakon Vodka.” 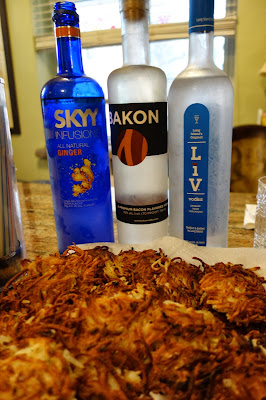 The latkes are luscious – delicately crisp, with a creamy potato center.   The LiV Vodka pairs particularly well – fried potatoes melding with distilled potatoes. The Skyy Ginger offers a bright and bracing contrast to the potatoes.  This pairing is Amanda’s favorite, so much so, that I end up leaving her the bottle.

Amanda is not completely sold on the Bakon vodka pairing.

I, however, am quite enamored of the match. The Bakon Vodka has a smoky, salty flavor, and even a sort of fatty mouth feel that creates a kind of edible symphony with the latkes. At this point, I’m mixing my metaphors, but with three vodkas to sample, what would you expect? 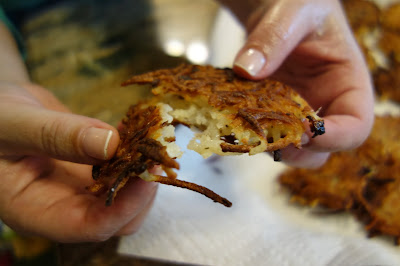 In the spirit of full disclosure – I must admit that I probably consume too many latkes, and enjoy the Bakon Vodka just a tad too much.  But, heck, tis the season, after all.

Perhaps it’s not exactly how the Maccabees might have marked the occasion, but we are really quite pleased with our new holiday tradition.

Amanda smiles with satisfaction. “I’ve had worse lunches,” she sighs. 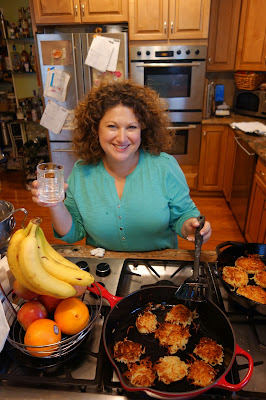 The Queen of Latkes has spoken.  Happy Holidays!

What a fun lunch and Amanda sounds like a great girl and one that certainly knows her latkes. When you spoke of sampling three vodkas, the old phrase one martini, two, martini, three martini floor came to mind only to be replaced with one potato, two potato, three potato (vodka), floor. What a delightful read this early Sunday morning. Thank you for starting my day with a smile
Sam

First, I must say that these photos of Amanda are the first time I have not seen her with a huge smile on her face - she was certainly concentrating! I'm also curious as to why Amanda doesn't have a special CT name...too many vodkas to think of one?! I'm also tremendously jealous of Amanda's double oven...maybe in my next home!

Ha! Zany, you know Amanda - she's completely out there, so no need for an alias!! And, she is smiling broadly in the final photo!

It sounds like your "culinary play date" was hilarious! Amanda takes her Latkes very seriously and that's the way it should be. I learned how to make latkes from an "adopted" Jewish "aunt" and I clearly remember her process as being quite focused. I still can't make them right though:)

Although not traditional, I'm sure I would love the Bakon Vodka with my latkes.

Thank you so much for sharing, T.W. Have a wonderful week:)

Tell Amanda these look sooooo good! I love them! She always make me laugh:)
I love vodka and my daugther too but I use for cook:) (Anyway she has 19 T.W. but to her age I only drunk White wine!!)
xo

So much fun! But after going through 15 pounds of potatoes in 6 days I can take a breather for a while. I'm taking very good care of the ginger vodka!

What a fun time! What a great combination of latkes and vodkas...

So much fun!! Amanda did a great job and the vodka sampling superb! Bakon vodka be nice in a bloody mary perhaps?!

Dear T.W., A great way to spend time with a good friend and enjoy the meaning of the holiday. Wonderful memories. Blessings, Catherine

I have been thinking of latkes the past week, and after seeing these it would be a special addition for my dh and his birthday tomorrow. thank the Queen of Latkes ;)

I had latkes the first time made by my best friend's mother, who had lived in Algeria and now France most of her life; delicious and as your friend's classic. She did not mention vodka though :)

Now that's a party I'd like to join! Amanda looks like fun and her latkes are divine! Your vodka choices are right up there, T.W.
My grandmother made them, sans onion (I know, shocking) and that little bit of flour makes the difference.
These are OMG looking fabulous.

I have only made latkes twice in my life & these latkes look very appetizing!
What fun you two must have had making them! Those vodkas look alright too! ;) Yum Yum Yummm! x