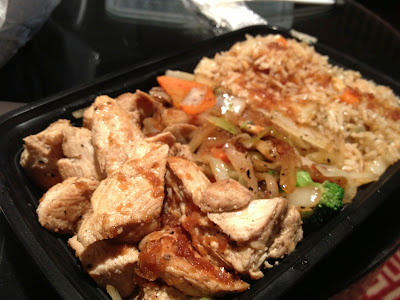 I’ve never been much for pyrotechnics.  Far from a model Boy Scout, I could never light a campfire, and my first backyard grill – a hibachi – required copious amounts of lighter fluid.  My guests would wait for hours only to be served an anemic, barely scorched burger.

So, I’m particularly awestruck when someone ignites an impressive flame, and it was no surprise that the Hibachi Heaven food truck immediately caught my eye. 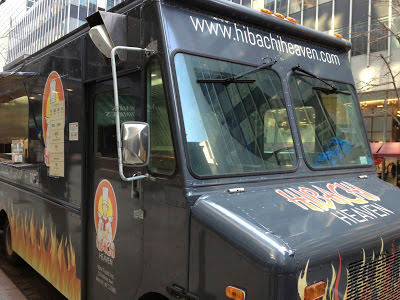 I’ve managed to collar my college roommate “Ford McKenzie” for lunch.  He’s recently started a job in my neighborhood.  I think a street food lunch is a fantastic idea.  He’s not so sure.   As a compromise, we’ve agreed to meet at a new sandwich shop for lunch.  But, when I spot Hibachi Heaven on 52nd Street, I send him an A.P.B., also known as a text.   Moment later, I can see Ford – dapperly dressed for casual Friday – just a half-a-block away heading towards me.

“I could sense the excitement in your text,” he tells me.   He’s right.  My pulse is racing.  I try to explain the kind of primal “hunter gatherer” thrill a new food truck inspires, but my words are insufficient.   I’m pleased that Ford will get the full food truck experience.  He’s just returned from India and sampled a variety of street food.   He should be a real natural at this. 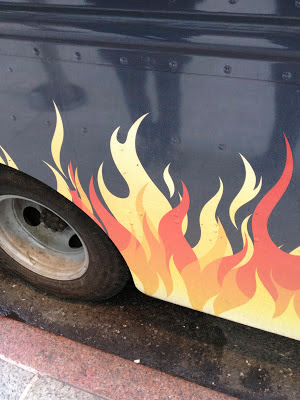 Hibachi Heaven is a sleek black truck flanked with Hot Wheels-style flames on each side.   An angelic hibachi chef is depicted on the truck door. 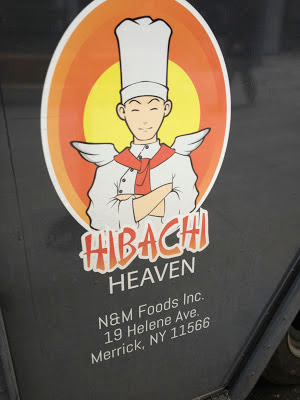 The whole concept of a hibachi on a truck has raised some questions in my mind.   The word “hibachi” means “fire bowl” in Japanese and a traditional hibachi is a ceramic box or bowl that contains charcoal.  I’m half-expecting a Benihana-style chef putting on a food and fireworks display inside the truck. 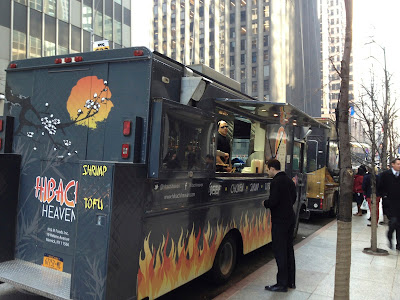 I suppose the truck is kind of a metaphysical hibachi on wheels.  The owners describe the vehicle as “a fire bowl truck filled with delicious food and great service.”   Hibachi Heaven boasts the largest grill on a food truck, but then I don’t exactly have a tape measure handy.

The menu is simple but substantial.   Entrees are available in a wrap or a bowl and you get a selection of protein, rice, vegetables and sauce.   If you are inclined to be creative, you can actually come up with quite a range of options.   The protein choices include beef, chicken, shrimp or tofu.   Add to that a choice of fried rice or brown rice and a vegetable medley of carrots, cabbage, broccoli, mushrooms and onions.   Top it off with a Heavenly Ginger Sauce, Yum Yum Sauce or Wasabi Infused Mayo.   It’s a lot of food and probably not the best option for the salad and soda cracker crowd. 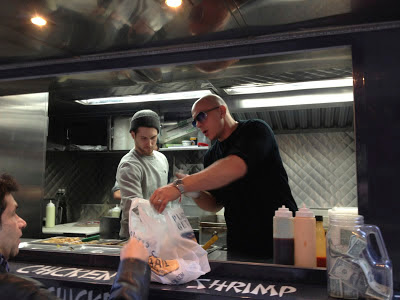 I pay for my order – a Hibachi Heaven bowl, filled with grilled chicken, fried rice, vegetables and Heavenly Ginger Sauce.   I’m about to head for the usual outdoor dining spot when Ford decides to add his own unique twist to the ritual.  I’m pointing to the concrete benches, but he’s shaking his head disapprovingly.

“We’re not eating outside,” he says.  “Let’s go to the lobby of the Sheraton.”

I should have known that “roughing it” was not exactly his style.  I follow Ford up the street and through the revolving doors of the Sheraton Hotel on Seventh Avenue. 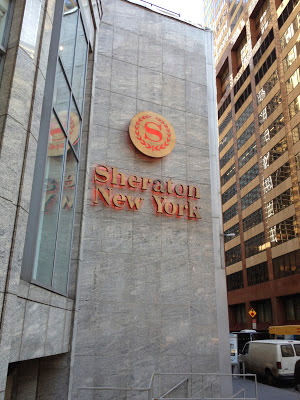 “Is this legal?” I whisper.

“Sure,” he says confidently.  “It’s a public space.”  He heads for a grouping of two cushy chairs, and brushes some paper and debris off a table so that we can use if for our indoor picnic.   It turns out the paper and debris actually belongs to somebody who huffily appears to collect his things.   Meanwhile, I’m keeping one eye trained on the hotel security desk as we unpack the goods.

Ford’s wrap is the size of a burrito on steroids.  The beef smells savory and delicious. 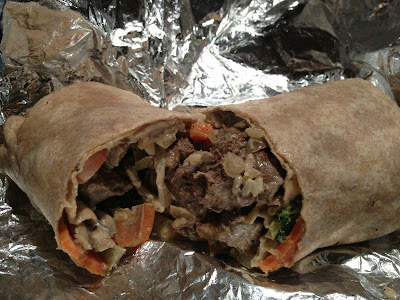 My chicken is rich and meaty with big chunks of chicken, the vegetables are nicely crisp and the Heavenly Ginger sauce adds a nice zing. 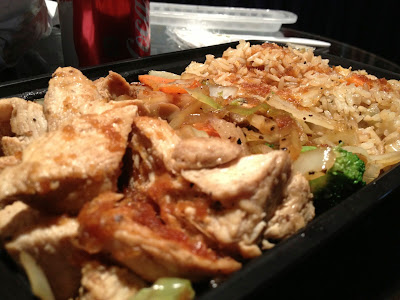 Leave it to Ford to take street food and "class it up" a notch.  In terms of our “fine dining” experience, it all turns out not to be a problem.  We enjoy an uninterrupted, leisurely lunch with a pretty good view of the taxi queue outside the hotel.   Ford thinks I worry too much about “the rules” but it would have been embarrassing if Hibachi Heaven had ended in the slammer. 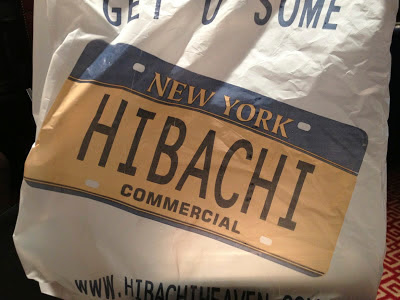 Hotel lobbies are some of the world's great public spaces, and if it keeps that yum-looking food warmer longer to eat indoors in the middle of winter, I'm with your friend. I'll keep an eye out for that truck next time I'm in the neighborhood.

Great story! With the angelic Hibachi Heaven Chef on one shoulder and Ford McKenzie on the other, I'm sure you that your culinary and journalistic karmas will be in balance.

Ford certainly knows how to dine in style. What a great idea. This food truck may be your best yet T.W.
Sam

Lobby of the Sheraton?! I just spit out my coffee! Has Ford learned nothing from our excursions?? This is seriously tipping the scales for me to move back.

Ford seems like the character! I always love reading about your food truck adventures.

Give him time, T.W. He'll come around :-) The truck sounds like quite a find. I hope your week is off to a good start. Have a great day. Blessings...Mary

My first reaction was Whoopie! T.W. has an almost partner in food truck capers. However, the hotel lobby thing kinda through me for a loop. Whoda thought. I would have been looking over my shoulder the entire time:)

Sounds like you both sure did hit the jackpot though!

Thanks for sharing T.W. and Zany tip those scales and return, we need you!!!

Hahahahahhaha! What a great idea to eat your lovely foods on the inside there! :)

All of the foods look very appetizing! Yum! Any leftovers?

As much as I would like to enjoy my truck food inside (that is if I lived where there was a truck selling delicious food), I would be worried that the security food police would tell me to move on.

OK...I admit it. I had no idea hotel lobbies were considered public spaces. I would have been just like you...one eye open watching for the management.
At any rate, you had quite a glamorous food truck experience with Ford. Zany's comment made me smile. It could be an interesting match up, T.W. We'll wait and see what other dining room venues Ford comes up with. The food looks good, but I probably would have been too nervous to enjoy it. :)

I can never see a food truck without thinking of you... you are inextricably linked in my brain. Love hibatchi food and I am with you about lobbies... it would never occur to me to eat street food in one (although if you were not dapper gentlemen that looked like you were hotel guests I bet the picnic would not have gone as smoothly). I look forward to finding this new truck.

New York has all the cool food trucks. I love hibachi!

Funny story :)
I love truck food. And your pictures gives me water in mouth !

I had no idea a hotel lobby was a public space! thanks for the info, although `i doubt `i would have the confidence of your friend in eating my lunch there! looks like a fantastic lunch too, btw.

I have spent the week in D.C.. Lucky for me, the food trucks out in front of Smithsonian were rocking. My goal was to enjoy a new food truck each day. I enjoyed two days and then the air got frigid and I was not in for roughing it (sigh).

Last time I was in NYC you sent me recommendations for food trucks in NYC and how to track them-Yea!