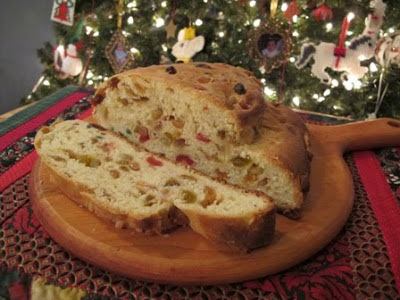 A Holiday Favorite from the Culinary Types Archives circa 2006:


Holiday food traditions are a miraculous mix of time, place, ideology and ingredients. Often times, a single person can be the catalyst for a family culinary tradition. They bring it to the table as a delectable gift, wrapped with their own cherished memories and life experiences. Through this act, they offer us a bit of themselves, and enrich our holiday celebrations.
In our family, there is the story of Margareta West, better known as Aunt Greta. Born in Kleinheubach, Germany in the year 1919, Greta began working as a domestic when she was 17 years old in the town of Offenbach. Greta worked for Frau Knudle for 23 years where she learned to cook and bake. At the age of 40, Greta was sponsored by her friend Sophie and came to the United States in 1959. In New York City, she worked for a doctor who resided on West End Avenue, and eventually met others who had immigrated from her hometown in Germany. She was introduced to my mother’s Uncle Karl by mutual friends and married him in 1961. 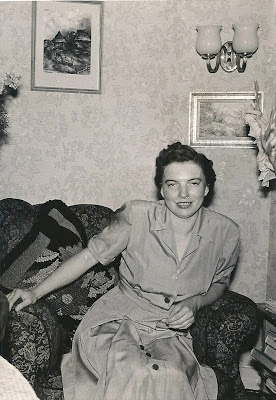 Throughout my lifetime, our family has enjoyed Aunt Greta’s homemade stollen at Christmas. Stollen is rich fruit bread made with yeast that originated in Central Germany in the town of Dresden. The characteristic oblong shape, with a ridge down the center is said to represent the Christ Child in swaddling clothes, and it is sometimes called the “Christstollen.” Greta’s stollen was enriched with butter and eggs, adorned with brilliant red, green and gold candied fruit, flavored with almonds and citrus zest and generously dusted with powdered sugar.These days, Greta’s hair is snowy white and she moves a bit more slowly. She has essentially retired from baking. Her words are sprinkled with German phrases like “Ach du Lieber.” She is wry, usually opinionated and direct, and always incredibly generous.  (Note:  Aunt Greta passed away several years ago)  I was of the impression that Greta’s recipe was an old European family heirloom, perhaps committed to memory. As I became more interested in food, I asked her to teach me how to make it and spent a Saturday at her home in Laurelton, New York learning her techniques. There, she produced a tattered, yellow clipping from a defunct Long Island newspaper, dated December 13, 1968, some nine years after she’d arrived in the United States.At first, I was taken aback. Did this mean there was none of the history I’d typically associated with Greta’s stollen? But, when I read the recipe clipping, my perspective began to change. It showed an enticing picture of a plump stollen decorated with whole candied-cherries and flanked by two cups of black coffee. The article described the importance of home baked goods to the German “kaffeeklatsch”tradition. The phrase translates as “coffee chat” and refers to conversation or gossip enjoyed by German hausfraus who gather for a cup of coffee and a sweet treat.I think the newspaper clipping was a tangible reminder for Greta of community and family traditions from her original home, and as she adapted the recipe and made it here, it was her way of sharing a festive custom from her homeland with her new family. I am now the keeper of that original newspaper feature that Greta clipped so many years ago when it likely inspired a fond holiday memory in her own mind that she generously passed on to us each year. Here’s the recipe:Aunt Greta’s “Old Time Stollen"¾ cup milk
1 pkg. active dry yeast
¼ cup warm water (105 to 115 degrees)
3 ½ cups enriched flour (divided)
¼ teaspoon salt
½ cup butter
6 tablespoons sugar
½ teaspoon grated lemon and orange peel
2 egg yolks
1 cup mixed, diced candied fruits
¾ cup golden raisins
¼ cup whole glace cherries
¼ cup slivered or sliced blanched almondsScald milk; cool to lukewarm. Dissolve yeast in warm water. Add to lukewarm milk. Sift 1 ½ cups flour with salt; stir in to yeast mixture and cover. Let rise in warm place until doubled. Cream butter until light and fluffy. Add sugar gradually, while creaming. Add lemon and orange peel. Add egg yolks one at a time, beating well after each addition. Gently combine egg mixture with raised dough. Add fruits and almonds. Roll out on a lightly floured board or canvas into circle, about 10 inches in diameter. Fold over once into traditional pocketbook shape. Place on greased baking sheet. Cover and let rise until doubled. Bake at 350 degrees until golden brown 35-40 minutes. Brush with melted butter. Cool on rack. Before serving, sprinkle with powdered sugar.

How fun that you have Aunt Greta's original recipe. I'm sure she would be pleased how well you've taken care of it and of your lovely stollen you've made for us today. I wish I had some of my great-grandmother's German recipes. They would mean a lot to me.
Sam

What a heart warming post, T.W. I never knew the story associated with the Christmas Stollen. Although, I have been meaning to look into it, one day:)

I couldn't help chuckling at the notion of "Aunt Greta" sharing a recipe from 1968. I have a few cookbooks that are in German which I've never been able to have translated. I'm thinking perhaps, Aunt Greta thought it would be easier to share the recipe in print. Of course, the story and the memories are what adds to the flavor:)

I'm off to Idaho for a couple of weeks, T.W. A very Merry Christmas to you and yours!!! Cherish every morsel of that Stollen:)

Although my mother's side of the family are German immigrants,I had never heard of Stollen until my daughter got a job several years ago at the Rockenwagner Bakery business. She married the German immigrant that worked there too and they carry out that tradition of coffee/tea with a sweet in the afternoon.
I loved reading your family story. I think my Grandfather was like the black sheep of the family, so I never was privileged of being around his family. :-)

Love this story, T.W. We all have family recipes that we still enjoy and whether this was an original from the old days doesn't matter. (The 60's are the old days now. ) The stollen looks delicious.
I have a friend who is making a family cookbook and instead of using only photos of the recipe, she is including original scanned copies of the old written recipe. Cute idea.

There is nothing more fun than making an old family recipe for a new generation to enjoy! Your Stollen looks marvelous!

I always love the stories behind so many of your posts. Stollen is one of my favorite Christmas desserts.

This is a lovely post, I really love stollen and this recipe sounds wonderful, nice history!

This is a very beautiful family story.
We can find stollen in France too, most in the North East, in Alsace, close to our frontier with Germany.
But we begin to find it, here, now, where I live, in Provence.
I never tasted it. But I have to try, maybe :)

T.W. the stollen looks beautiful and sounds delicious but the memories that will be served with it have a value that can't be measured. I know you will have a wonderful holiday. Blessings...Mary

Simply put, this is why food is amazing.

Love stollen, just bought one and now feel guilty about not making it; your late aunt sounds like a wonderful person!

This Christams stollen rocks! I just made a vegan version yesterday, my way! I will publish it soon, I promise!

What a lovely lady she must have been! :)