Mr. Pink and the Dog Days of Summer 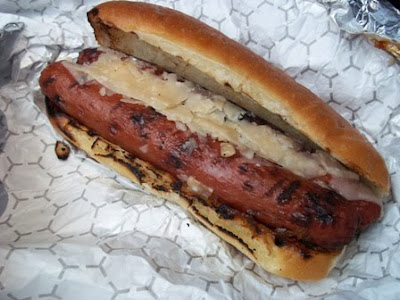 It’s the middle of July and the air quality is only slightly better than a ripe garbage dump. Summer ennui is severe, and we all have been hit with a virulent case of crankiness. It’s so hot, the buildings are sweating. 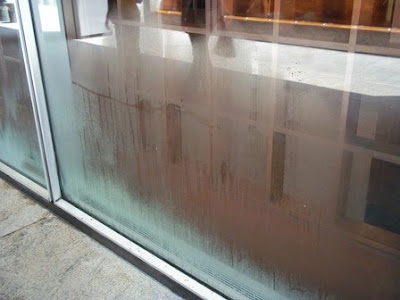 Zany and I are trapped in a terminal conference call. She mouths, “I’M STARVING!” Mad Me-Shell is desperate to pull the rip-cord for lunch. We’ve GOT to get out of this office!
It is 11:17 in the morning. “Edgy” does not begin to describe our mood. As soon as the conference call appears to be wrapping, we disconnect without pleasantries and make a break for it.
It’s about a thousand degrees outside, but Mad Me-Shell is on a mission. “Nothing like a hearty, hot meal to cool you off,” she notes cheerfully.
“You’ve been eating way too healthy,” she admonishes me. We’re bored with the food trucks, so we’re back to bricks and mortar. Mad has scoped out our options and we’re heading straight for The Side Door @ Beacon. The Beacon on 56th Street made news a few weeks earlier by offering – for a limited time only – burgers and hot dogs sold from the side door of the restaurant. The side door theme feels a little illicit and we like it. It’s pumping our appetites. 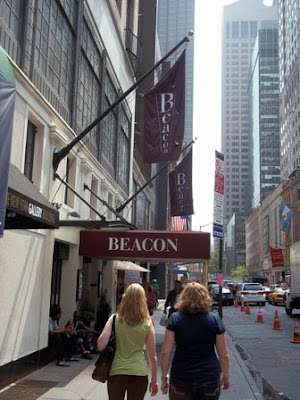 Joe and Katie are staffing The Side Door, and we couldn’t ask for nicer hosts. A few minutes with them and our crankiness evaporates. Katie even gives us a button as a souvenir.
Katie tells us the Side Door was the brainchild of Chef Waldy Malouf who specializes in open fire and wood fire cooking. We can’t decide what we want so we order everything on the menu. Lest you think us extravagant, there are only four items on the menu. We are particularly intrigued by Mr. Pink’s Double Dog, but it’s kind of a toss-up with the Wood Grilled Burger. 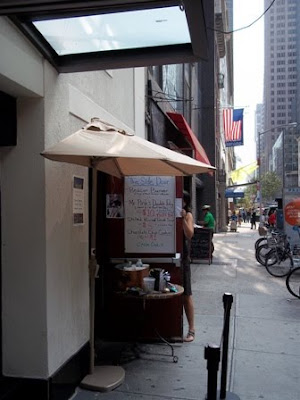 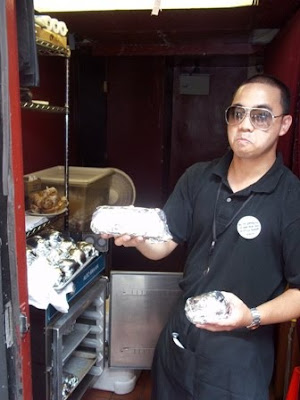 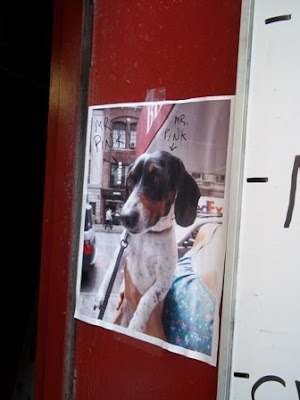 After some debate, we decide to each get a Double Dog (that’s six dogs total) and one burger and a serving of Chilled Roast Tomato Salsa Soup to share. Don’t let me forget the four chocolate chip cookies.
Zany is adamant that we try the burger. She’s still pining for the Burger Truck which has been scrupulously avoiding midtown this summer.
We haul our eats about a half-block to dine at the base of a disco ball fountain on Sixth Avenue. It appears to be a pigeon-free zone, which is a plus. As the wind shifts, we get sprayed by the fountain. It’s refreshing.
“It’s like having a picnic by the ocean,” notes Zany. 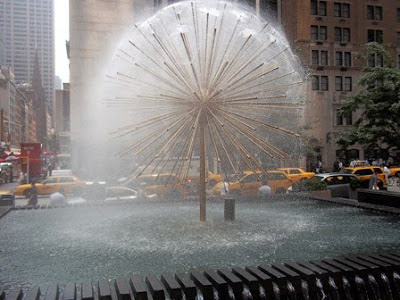 First we tackle the dogs. Mad Me-Shell opens one of the wrapped dogs and cries, “Oh, Sweet Mama!” 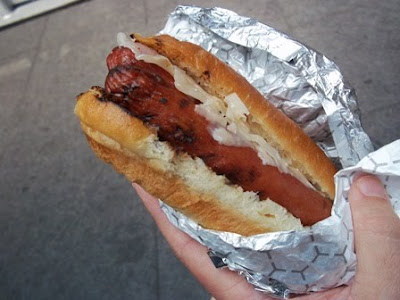 Two dogs in one bun is like Christmas in July. The parmesan is the good stuff, the sweet pepper relish is perky and the massive dogs and grilled buns have a sensual smoky flavor. There’s a good balance of spices, and the cheese and relish imparts a nice tang.
I point out that we are – in fact – enjoying a healthy meal. “You save on carbs combining two dogs in one roll.”
“You keep telling yourself that, T.W.,” says Mad. 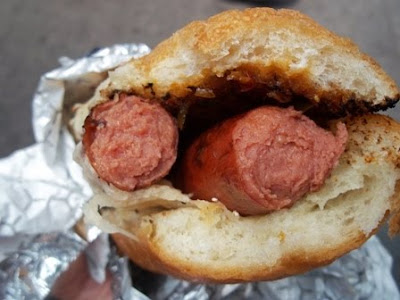 Beacon’s specialty drink is “Tiger Tea.” They say it’s a quart of lemonade ice tea, but it looks more like a gallon. Good when you’re dehydrated. 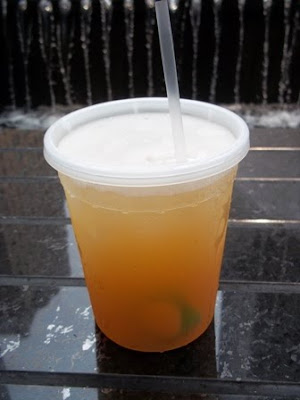 We share a container of chilled, roasted tomato soup to cleanse our palate between courses. 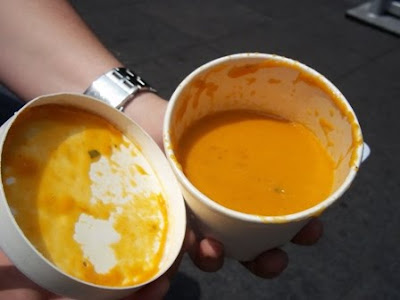 The soup is thick and chunky with a sunny color and a touch of heat. The combination of chilled soup and salsa evokes summer with a little bit of sizzle.
We have barely finished the soup when Mad Me-Shell is reaching for the burger.
“Let’s go, Mad. Carve it up,” says Zany.
It’s not easy to split a burger three ways. “Many people consider carving turkey an art,” says Zany. “Mad Me-Shell considers carving a burger as summer art.”
If it’s possible that anything could top the Double Dog, Beacon’s Famous Wood Grilled Burger does it. The charred, smoky flavor, the melted cheddar, and the cool tomatoes and pickles on a grilled onion roll rocks our world. It’s like a country campfire on a bun. 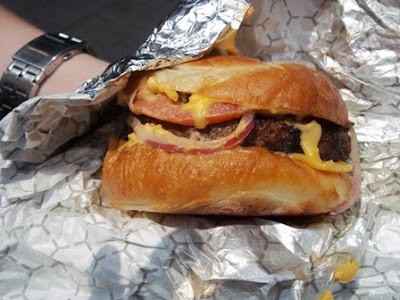 “It tastes like it was cooked in the backyard,” says Mad who is close to swooning. In fact, I think I’m going to have to peel her off the pavement.
“It’s dripping down my hand,” she practically squeals. “Always a good sign.” 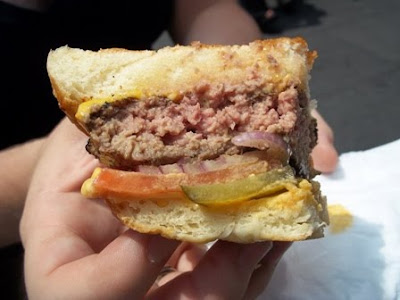 Zany wants to take a vote. Which do we like better? We can’t decide. Why is she trying to force us to commit? It’s like apples and oranges. Or burgers and hot dogs. How can you pick?
“This might be the best picnic I’ve been to so far this year.” says Zany. “Now if only we could spike the Tiger Tea.”
As we leave the plaza, we pass a likable-looking man who is sitting at the edge of the fountain enjoying his lunch. Zany, who is normally the nicest person in the world sneers, “That guy’s eating a salad!”
“Sucker!” chimes in Mad Me-Shell.
They are obviously suffering from an overdose of 100 percent beef Double Dog and it’s making them aggressive.
The walk back to the office is just enough to re-invigorate our appetites, so there we break into the chocolate chip cookies. The girls agree that they have that unique combination of chewy, crisp and chocolaty. 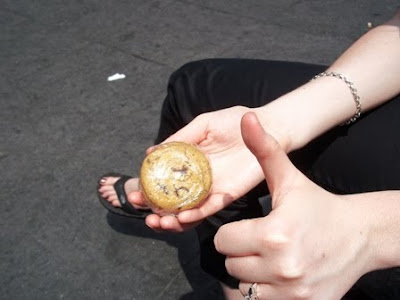 “Do you think Mr. Pink made these?” Zany wonders out loud.
I won’t even attempt to pretend that the afternoon was productive. But, thanks to Mr. Pink we’re feeling those “good vibrations” of summer again. 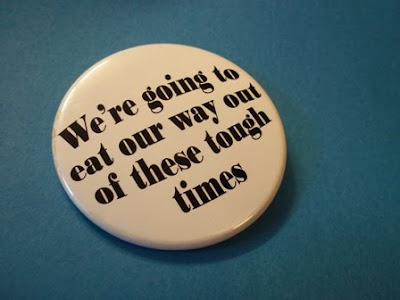 A side door hot dog & burger, starring Mr. Pink sounds perfect for a NYC workday lunch, and especially your entertaining accouting of it.. !
Hope things have cooled down a bit by now...we had a couple of heat waves here, but they've passed and it was in the mid 60's yesterday morning. Decidedly brisk!

TW, I loved this information. I am crazy about his Chelsea pizza joint... a great quick bite with wood fired oven... must try this when I am in that hood. double dogs are truly inspired... will this continue when the thermometer dips???

T.W., First of all, it's absolutely crazy that anyone could begin to choose between that gorgeous burger and a double hot dog. Everyone knows you would have to have some of each!

I'm so, so glad Mad Me-Shell and Zany are back in the swing of things. I've missed them terribly and I hope you'll tell them not to stay away so long next time.

I personally would hope Mr. Pink would park near my office often. And I love the button. Absolutely perfect for our current economic times. I couldn't have said it better myself.
Sam

I love the stories of your lunch-time adventures! The side door is a brilliant idea! I wonder how long it will take to hit Boston....

Now I am more jealous than ever of your midtown lunchtime forays into fine dining!

This post just made me smile over and over again. I can totally relate to the dog days of Summer here in Florida. What I can not relate to here n Tallahassee is to be able cure my heat blues with some fabulous city food. Double dogs, beautiful burgers and chocolate chip cookies to seal the deal-awesome!!!

I am drooling! It's terminally hot here too, but no close place to get food like this!

Now you are Double-Dawging? What will it be next year, the triple dog: 3 dogs, onion, and mustard on a bamboo chile skewer (no bun, please)? Or, deconstructed pot dog: 4 dogs inside out in a pot, with bun panzanella, square ketchup crutons, and a sprinkling of crystallized relish? Where will this end?

OMG~now that was a lunch!That is the most delicious hot dog I have ever seen!

now you have me so hungry wanting to eat food I am trying to avoid....sigh...a double dog, what a wonderful concept.....and that burger looks delicious! sounds like all in all you had a pretty darn good meal!
thanks for sharing it with us!!

As I walked to work in the sweltering heat this morning, I couldn't help but think about the double dog and the burger...I even considered knocking on the side door to see if they would hook me up with a breakfast portion, but alas I refrained. Thanks to TW for convincing us we had to try everything -- there's just no way to choose between the burger and the dogs!

The button in your last photo should be mass-marketed. I think it's wonderful. As was your lunch. Awfullness can be delicious and a break with regime every now and then never put anyone in an early grave. As a matter of fact, I wish I could have tagged along. I hope the day treats you well. Blessings...Mary

Now we must look forward to the Beacon Chowderfest! I hope Mr. Pink is there...I have a feeling he is the life-of-the-party kind of dog.

T.W.
We do believe there's a story around every corner for you - and always an interesting and creative one!

TW,
Those are some serious looking dogs! Great way to beat the city heat.
I hate the city in the summer, I want to wear a mask to cover the gross smell in the meat packing district (no lie, I have really wanted to do that sometimes!!!).

We need a good week of rain and that garbage dump smell will wash away! (sounds appetizing!).
Stay cool!
Stace

I heard it was miserably hot three weeks ago. Ripe garbage sums it up.

I have to agree with you - you DO SAVE on carbs by doubling the hotdogs, Mr. Pink was a brilliant one. I think I would have needed every drop of that lemonade to get through that day.

The hot dog looks like a winner & the other food looks lovely & so appetizing too!

What a delicious story, culinary creativity and a mid-day picnic, bravo! Cheers :)