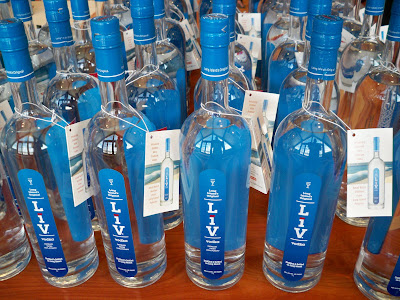 When Rich Stabile’s family summered on Long Island’s East End in the 1970s, the North Fork’s wine industry was just taking shape. But, at an early age, Rich had his eye on another iconic agricultural product – the Long Island potato.

“I was always struck that there were all these potato fields and wondered, Why isn’t anyone making vodka out here?” Rich says. The question stayed in the back of his mind for years.

Fast forward to the summer of 2009. Rich is President of Long Island Spirits and we are talking in the company’s newly-opened tasting room, located in a majestic, refurbished antique barn in the community of Baiting Hollow. Long Island's only state-of-the-art distillery is housed on the ground floor. Visible from the back balcony is a sweeping panorama of one hundred acres of potato fields. And, the signature product sold by Long Island Spirits is LiV (rhymes with five) Vodka, distilled from 100 percent potatoes. 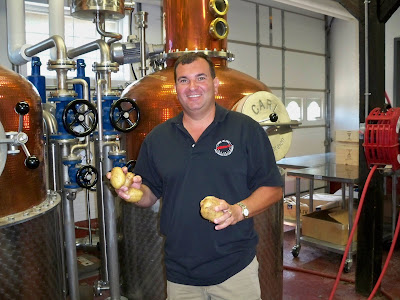 According to Newsday, potatoes were once the dominant crop on Long Island. Records show that in 1945, there were 72,000 acres of potatoes in Nassau and Suffolk. But over time, suburban growth and unfavorable economics began to encroach. Many Long Island vineyards were actually planted on former potato fields, reviving a flagging agricultural economy. Farming has shifted to flowers and ornamental shrubs, yet even today, commodities like potatoes and duckling still retain a kind of legendary status on “the Island.” 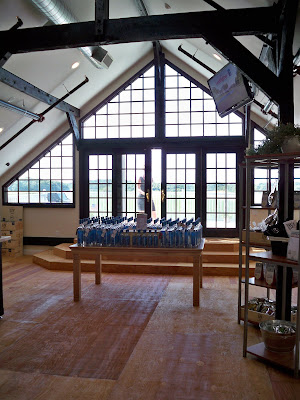 The Long Island Spirits tasting room opened in May 2009.

Under Rich Stabile’s direction, Long Island Spirits is likely to spur a renaissance for the humble spud. He is genial and obviously passionate about his business.

“For me, the Long Island potato is such a unique commodity,” says Rich. “It’s one of the best potatoes available in the world, actually, and it’s got a perfect starch content to make vodka, so I wanted to take advantage of that.” 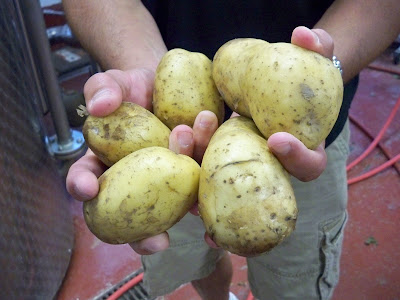 Initially, he took a different path, working in electrical engineering, the semi-conductor industry and several start-up companies. As he traveled the world, he would visit wineries and distilleries for pleasure. The experiences stoked his entrepreneurial spirit.

“I was fascinated by distilleries because there’s year-round activity where, with a winery, there’s a flood of activity for eight weeks.”

He educated himself further, with classes at Cornell and additional training. “I really immersed myself in understanding spirits.” Soon, he’d assembled a formal business plan and partnered with a childhood friend, Dan Pollicino.

Of course, if you build it, they will come.

“We’re ecstatic with the response we’ve gotten from the market,” says Rich. Since its introduction last year, LiV is now distributed in six states with more anticipated. The vodka was named “Best in Class” at the NY Spirits Awards and was given a score of 92 by “Tasting Panel Magazine.” 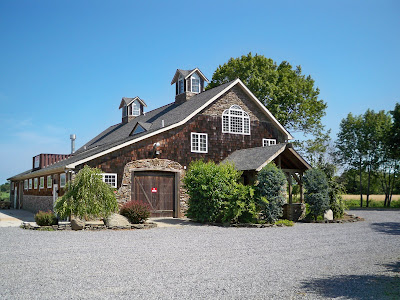 Long Island Spirits is based in an exquisite renovated barn in Baiting Hollow, NY.

He walks me through the production area. There are huge sacks of tawny-skinned potatoes piled against the wall.

“We go through about 8000 pounds of potatoes a day,” he says. “It helps for sustainability out here and keeping an alternative market for potatoes.”

The potatoes are ground into a fine mash and heated with water and enzymes, which initiates the breakdown from starch to sugar. From the outset, the head distiller is always monitoring the mixture from a taste perspective. The mixture is then moved to a fermentation tank and cooled slightly.

“At that point we’ll add yeast, and that begins the process of turning the material into a potato wine, if you will. Up until this point, it’s very much the type of process you’d see in a winery.”

After several days, the mixture is transferred to the still. Rich points to two 650 liter copper stills with towers that reach to the roof of the barn.

“What makes us different is we have rectification columns, and this allows you to legally make vodka. You need to bring vodka up to over 95 percent alcohol before you can blend it down. So we do a triple distillation.”

The final bottling is completed by hand and the result is a truly unique product. “It’s got a different viscosity. Less than one percent of all vodkas are made from potatoes because it’s a much more expensive process,” he explains. “Eighty percent of a potato is water, so you’re starting out with much less of a starch-based element to begin your fermentation process.” 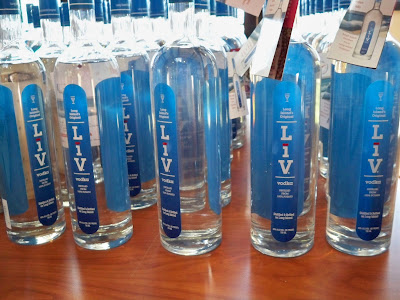 A bottle of LiV Vodka evokes the ocean off Long Island.

A bottle of LiV Vodka is distinctive – crisp, clean and elegant, adorned with a cool blue and white label.

“We wanted to be about what’s inside the bottle, plus we wanted to convey the image of Long Island being an island itself,” Rich explains. “So there’s actually a light blue and a dark blue transition, from the top to the bottom of the bottle, showing the depth of the ocean.”

And, if a young Rich Stabile took notice of the burgeoning Long Island wine industry, it may well have influenced his nuanced take on Long Island vodka.

“One of the first things you’ll notice that’s different is the "nose" on our vodka,” he tells me. “It has almost a citrus, floral scent to it, where a lot of other vodkas are almost ethanol. The other distinctive characteristic is the mouth feel. It’s got a buttery, almost creamy feel in the mouth. And, that viscosity is very evident. You have vanilla, anise, and some people taste banana. It’s got a very nice, soft finish with a very light burn.”

Long Islanders can be a tough audience, but they have welcomed LiV Vodka with enthusiasm. “They’re very proud that we have a world class vodka distillery here,” Rich says. “We’ve build such a strong, loyal following.”

That’s likely because Rich has created the quintessential local product. He’s managed to distill the essence of his life experiences, his talents and the agriculture and landscape of a region and capture it in a bottle of LiV Vodka. He says it’s a dream come true.

“I love getting up in the morning and coming here,” says Rich. “I love the beautiful aromas that come out of the distillery. It smells like mashed potatoes when we’re fermenting. Every day just seems to get better.” 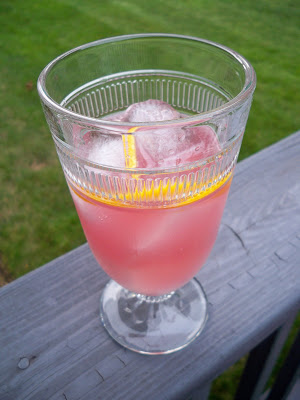 In a mixing glass, muddle mint, lime, and sugar. Combine with LiV Vodka and Cranberry Juice and shake with ice in a shaker. Strain into a highball glass filled with fresh ice, and finish with an orange peel.
Long Island Spirits is located at 2182 Sound Avenue, Baiting Hollow, NY 11933
©2009 T.W. Barritt all Rights Reserved
Posted by T.W. Barritt at Culinary Types at 12:05 AM

Well, I DO love potatoes...and a good drink!

I love the look of the bottle - it's very clean and fresh. Interesting to hear about the difference in smell, too. Now the question remains...did you get enough to share with others???

What a beautiful effort in what seems to be a very deep and informed way...local, market savvy, and making customers happy. This is surely a textbook case of how to be successful. Mazel tov!

I wonder if I could taste the difference between "regular" vodka and potato vodka. I love that you have so many interesting artisan food producers in your area.

We do have such a versatile Island don't we T.W? You have done a beautiful job of steeping our curiosity. Thank you:)

I must confess, seeing so those beautiful potatoes nearly brought tears to my eyes:(

P.S. I "borrowed" this link to include in potato post I did a while back. Best to spread the word you know:)

So when do I get that Long Island martini?

Even though I'm not a drinker, it looks like such a fun place to visit that I'll volunteer to be a designated driver for anyone who goes for the tasting.

Great story! My absolute favorite cocktail is vodka and cranberry juice with a lemon twist. I like this version. I must give this a try. Thanks!

What a gorgeous barn. Wow. One of our friends visited us not long ago and brought as a house gift a bottle of Idaho potato vodka. It was good stuff and I bet this is too. I like vodka but my husband says it doesn't taste like much - what does he know.

I've been on holiday for the last couple of weeks with no internet access. Missed all of my friends and it's great to be back. I always enjoy your trips and thanks for taking us along.
Sam

This is fascinating! I loved going through the process and facility. Perhaps I should say cheers and raise a glass to them now! Oh wait...it's only 1.30 pm here. My illustrations sure would be interesting if I made one of these refreshing-sounding cocktails this afternoon! :-)

The hubby's mom makes vodka in her home...at least that is what I am told :). Very interesting post on distillation.

i have a totally new respect for potatoes~thank you so much sharing all this info. I found it fascinating! Will put this on my list for the next time I am in the area.

Your drink looks so good. Sounds like a place that should be visited.

I love this! My grandfather was a potato farmer, and I've often thought that someone from NB or PEI should produce a premium vodka. Too bad I'm not more industrious.

Although I also do not drink, I love potatos and being I grew up on the same farm that is producing the potato's used to make this product, I am truly impressed by the owners vision in making this dream of theirs a reality! Good luck going forward and the potato's do make all the difference!

I love this article truly! Keep doing like this!