A Guy, a Pie and a Fistful of Corn Chips 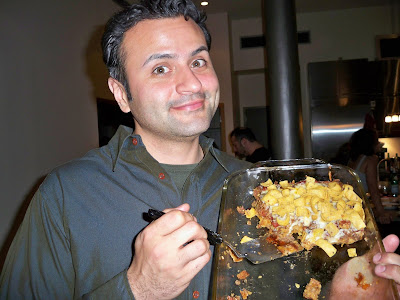 Some folks spend years perfecting a signature dish. You might even say that the signature dish is a window into a home cook’s psyche. For example, there’s my pal Mary’s hot and sassy Penne a la Vodka, or the international panache of my buddy Rocky’s Paella. And, don’t get me started on Mad Me-Shell’s slow-simmered, “I can handle anything with the greatest of ease,” Pulled Pork with Bourbon Barbecue Sauce.

Then, there’s a certain dish and its creator whom I encountered on New Year’s Eve. Manhattanite David Shamoon – a regular reader of Culinary Types – is a chili kind of guy. But, not just any chili. David is a Frito Pie connoisseur.

For David, his signature dish reflects a quirky sense of tradition seasoned with a flair for adventure. I’ve tasted David’s fabulous, from-scratch Frito Pie before, but this time around, the crafty guy threw in a secret ingredient.

What?? You’ve never heard of Frito Pie? Well, David can wax eloquently on the dish that many believe to be the champion of casseroles. We meet up at the buffet table at an impossibly chic Soho New Year’s Eve pot luck party comparing the attributes of his covered dish and my famous Double Good Macaroni & Cheese, an equally stupendous suburban staple.

“I'm sure you, T.W., will do the research,” David tells me, “but my guess is that Frito Pie was invented in a dingy trailer park in Oklahoma by a blue haired woman, with surprisingly nimble hands, who smoked Old Gold 100s.”

Well, as David anticipated, I did my homework. While Frito Pie was not listed in Larousse Gastronomique, it is indeed featured in the Back of the Box Gourmet, and The Dallas Morning News had recently done an extensive profile on this Southwestern classic.

The year is 1932. The place is San Antonio in the midst of the great Depression and C.E. “Elmer” Doolin invents Fritos corn chips, one of the legendary snack products of our time. Elmer’s momma, Daisy Dean Doolin, takes the bright idea one step further, and decides to top off some of the chips with chili. Eureka!! Frito Pie is born. Some people say it’s the Southwest equivalent of the tuna noodle casserole. Now, here’s where a little Hatfield-McCoy action surfaces. The city of Santa Fe also claims that Frito Pie was invented there by a woman named Teresa Hernandez at the Woolworth’s lunch counter in the 1960s. It’s a romantic tale in its own right, but trust me, this is one culinary squabble you don’t want to get in the middle of.

(I must confess, here and now, that I once made Frito Pie. This was well before all my fancy-smancy French culinary training. I had to come up with something for a church pot luck in a pinch, but I didn’t quite follow David’s “from scratch” approach. I have a propensity for short cuts. Instead, this “future chef” warmed up two cans of Hormel Chili and topped them with a bag of Fritos. It was a big hit at the Parish Hall. After all, Long Island is the Casserole Corridor.)

So what is it about Frito Pie that caught David Shamoon’s eye?

“It’s kind of a bachelor thing,” he tells me, explaining that all single guys need one reliable, no-fail recipe. Sarah Jessica Parker had her cosmopolitans. David Shamoon has his Frito Pie and he’s been perfecting it for years.

“Chili is hard to bring over to a party, but when you serve it in a casserole, it’s magic,” he tells me. “The Frito curls on the top make people go wild. “The reptilian part of your brain says, “I gotta try me some of that.”

Recently married, Dave made a departure from his bachelor ways for a new – dare I say, haute cuisine? – version of Frito Pie, as we all stood on the verge of 2009. Apparently, innovation is in the eye of the beholder.

According to David, “My Frito Pie is even red-neckier than usual. The secret ingredient is venison. A week earlier I visited Johnstown, Pennsylvania, a town deep in Steeler country that is most famous for its floods. The area's economy was depressed by the decline of the steel industry, but somehow Johnstown had somehow managed to turn it's propensity to flood into something charming. The town has two flood museums. At a Christmas party there I met a really nice guy who gave me over ten pounds of venison. He was a truly generous guy. His wife showed me the two goats she received for Christmas on her digital camera.”

How did this new twist impact the proven formula? “Venison is very lean meat,” explains David. “I fixed that problem by making the chili with bacon. Once you make the chili, turning it into a pie is easy. All you do is get your casserole dish, lay down a layer of Fritos, glop on some chili, add cheese and top with Fritos. After about 20 minutes in the oven you have your Frito Pie. It's always a big hit. There's something about seeing those crispy Fritos on top and the melted cheese that makes people lay into it.”

Now, I don’t know if David wooed his bride Dawn Marie with his Frito Pie, but he was convinced that everyone who attended the New Year's pot luck in New York City was swooning over the dish. Says David, “Everyone at the SoHo loft apartment agreed, the Frito Pie was delicious. High praise from a tough crowd. There were some serious foodies there. Bill, a computer book publisher from San Francisco likes to pick up kosher pickles in the Lower East Side whenever he's in town. Doug and Nelson, the hosts of the party, consider Dean and Deluca their neighborhood market. But, the Frito Pie was undeniably delicious.”

I have to agree. The addition of venison was an audacious move, worthy of some of New York’s top chefs. The chili was rich and flavorful, not at all gamey, with the perfect balance of that bold, familiar seasoning. And, those Fritos just seem to melt into the perfect “pie crust” all on their own.

With such a radical experiment deemed a success, are there new culinary challenges for David Shamoon to tackle? “It's 2009 and I have a New Year's resolution to loose 10 pounds,” he says.

Here’s the recipe for Frito Pie that I once used so long ago. It’s definitely the “quick-cook” version, but if you’ve got a favorite “from-scratch” chili dish, and like David, you have an iconoclastic streak and want to satisfy a certain creative desire, feel free to go crazy. But, don’t forget those obligatory corn chips, and be sure to sprinkle a handful of feisty sunshine on top. 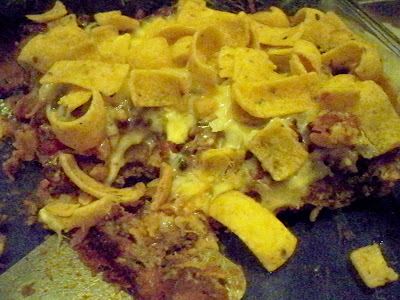 Frito Pie (from “The Back of the Box Gourmet” by Michael McLaughlin, 1991)

Spread 2 cups Fritos in a baking dish. Arranged chopped onion and half of the cheese on top of the corn chips. Pour chili over onions and cheese. Top with remaining corn chips and cheese. Bake at 350 degrees Fahrenheit for 15 to 20 minutes or until hot and bubbly. Makes 4 to 6 servings.

This brought back memories for me. When I was young I had a baby sitter that was an older lady with many stories. One was when she was young her family lost their new home in the Johnstown flood, all they were left with was the key. Another story was she had made a trip to Texas when Fritos were first produced and brought back many bags "on the running board of our car". How she managed that I have no idea LOL. I think a lot of people serve a Frito pie at various events by opening small bags of Fritos and spooning chili into the bag.

Being a New York City girl by birth, and a city dweller for my entire life until the last few years, I've never lived in casserole country -- and, it shames me to admit this, I've never tasted Frito pie. Heard of it, of course, but never tasted it. Perhaps it's time....

I think I've had this before at a party but did not know what it was called. I'll be on the look out for this Frito pie!

Mon dieu! Looks like we should throw out those healthy eating resolutions and buy stock in Alka Seltzer. What next? Spam sorbet?

I crush chips and cheese on chile all the time and it's yummy. Will try fritos now.

Blend up Spam and aspic until smooth and creamy. Do the same with the avocados. Retrieve your empty large Spam can (left over from main course) and press Spam mixture into the bottom. Add a layer of the lemon sorbet, then a layer of the avocado paste. Several alternating layers can be added to suit aesthetics and personality. Pop in freezer for an hour then scoop onto cones, sprinkle with Bacon Bits and enjoy.

I think the gauntlet has been thrown --- I'm seeing a Frito pie with chili made from SPAM, venison and pulled pork!

Don't you just adore the name Daisy Dean Doolin. With a name like that, you know she had to be the inventor of Frito Pie!

The floods that devastated Johnstown had a lasting impact on many communities in central PA. If you should ever be in my neck of the woods again T.W., there's a winery in Johnstown that actually produces pretty good wine. I'm not sure how or why but it does.

GREAT post T.W. I will be saving this for Pie Day and now I know what to do with that leftover Long Island venison! (I have tons!) or at least a few pounds.

You're right, I wouldn't want to get into the middle of the who-invented-Frito-Pie fight for the world, but I do love David's version of its creation. I think it was the Old Golds 100s that convinced me it had to be true.

Zut alors! I've been Spammed. Spam sorbet could indeed be the perfect dessert for the Great Recession.

"even red-neckier than usual"..LOL
How funny is this post?! I'll tell ya, I never had this, but it's so true..it's the kind of dish you HAVE to try!

Loved the post. I plan on making this for my Super Bowl party. Keep the recipes coming...

I love frito pies, but never thought of making them for a crowd. :) Great idea!

Brings back memories. I used to go down to Texas for a month at a time, and my girlfriend's kids used to do Frito Pies all he time. Lay the bag down, slice it wide open, and pour the chili on top. You don't even have to dirty a plate that way ha ha ha. Great post. Almost ashamed to say I love these.