Making Do with Wacky Cake circa 1944 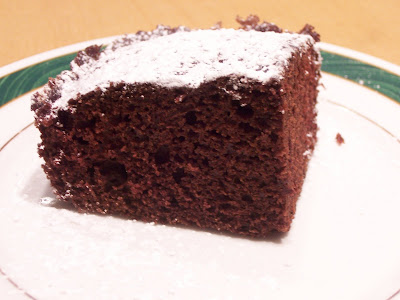 Henry Birch watched doubtfully as his mother dug three craters into a dry mixture of flour, sugar, cocoa, baking soda and salt that she’d just whisked together in a greased glass baking pan.

“What do you mean, honey?” asked Edna Birch.

“We’ve got no eggs, Ma. You can’t make a cake without eggs.”

“Rationing has made things tough,” said Edna. “No eggs. No butter. I used to make such lovely, tall cakes when you were in elementary school.”

“I hate rationing,” moaned Henry. “I thought I liked Kraft Macaroni and Cheese, but we eat it all the time.”

“It’s very thrifty,” said Edna in her “practical homemaker” voice. “We only need one rationing coupon for the blue box and it feeds the entire family.”

Henry shrugged out of his varsity sweater and continued to watch as Edna measured melted shortening into the large crater and spooned white vinegar and vanilla extract into each of the small craters. She then poured a cup of water on top of it all, and quickly mixed it into a thick, lumpy, chocolaty batter. 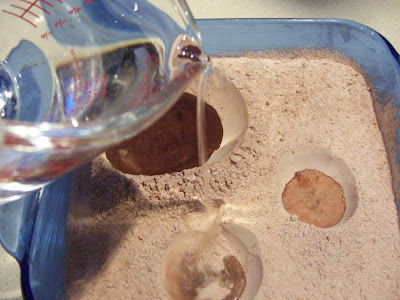 “That looks like a mess,” said Henry unflinchingly. “Are you really gonna get a cake out of that, Ma?”

Edna smiled patiently. “Trust your mother, Henry. The vinegar and baking soda react together. It’s what makes the cake rise up. Wacky, huh?” She slid the cake into the hot oven. 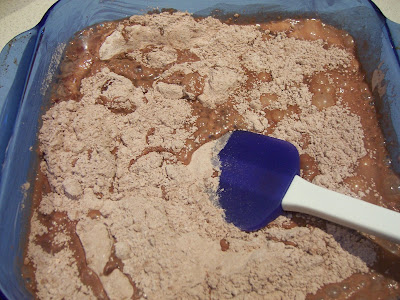 About a half-an-hour later, she pulled the square cake from the oven, dusted it with powdered sugar and cut a slice for Henry. He savored the deep chocolate taste and light texture.

“Delicious, Ma. Thanks for doing your part for the war effort. Now, is it okay if I meet Betty down at the Bijou? They’re showing “Lassie Come Home.”

“Speaking of everyone doing their part, have you done the work in the Victory Garden like I asked you?”

Henry glanced at the bold-faced headline stretched across the copy of the New York Daily News that was neatly folded on the kitchen table – “100,000 Allied Troops Invade Normandy.”

Maybe the Bijou could wait. He snatched up the gardening gloves and headed for the back door. The family was counting on him for dinner. There was lettuce and red radishes waiting to be picked. After all, everyone has to do their part.

Wacky Cake is said to have been named for its unconventional mixing method – the use of oil, vanilla and vinegar, poured into different wells in the dry mix and then combined at the very last minute with water right in the baking pan. The reaction of the vinegar and the baking soda gives the cake its lift, without the need for eggs. The Old Foodie explored the virtues of Wacky Cake, with this recipe during her Week of Cakes last February. 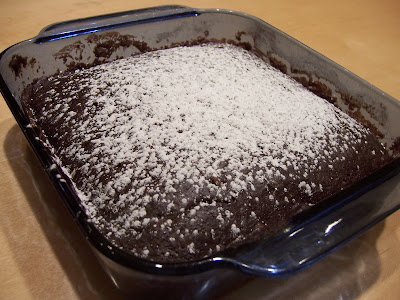 Wacky Cake is an ideal pantry cake. I had almost everything on hand, it took minutes to assemble and was out of the oven in 30 minutes. It actually reminded me of another “quick cake” from my youth, “The Snackin Cake” that was marketed by Betty Crocker, and as I recall, only required the addition of oil to the dry cake mix.

The cake is surprisingly moist – rich like a brownie – but much lighter and simply adorned with powdered sugar. It is a perfect, make-ahead picnic cake, and I made the Wacky Cake for our pre-Memorial Day indoor office picnic that was cooked up by our intrepid associates Ms. Zany and the belle, Mad Me-Shell.

Zany contributed her signature Macaroni Salad, sweet and savory with a touch of mustard: 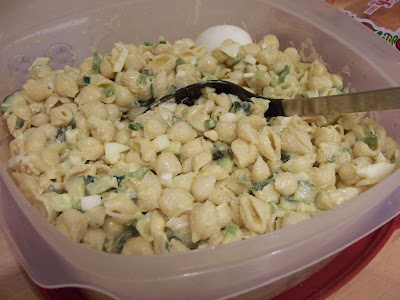 Mad Me-Shell made the most amazing slow cooked pulled pork – better than anything you could find in Tennessee – nicely soused with Jack Daniel’s Barbeque Sauce: 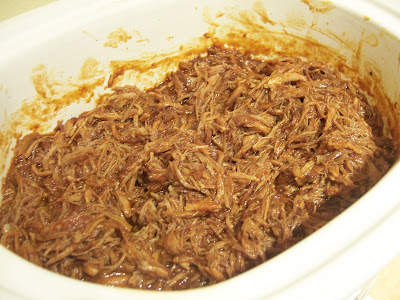 And, a mysterious benefactor – who hardly ever darkens the door of a kitchen – conjured up the world’s best deviled eggs, richly seasoned with curry: 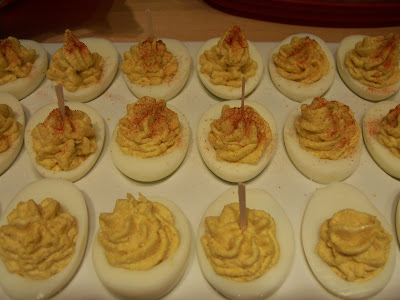 It was all in honor of GH, our sunny, optimistic and extremely capable colleague who is heading south for new opportunities. We will miss her, and wish her the best!

Early in my food writing career, I was set to interview an artist and she had planned to make three recipes for me. When she told me that one of them was "wacky cake," I laughed -- of course I had never heard of it -- and when she said it didn't use eggs, I started to get worried. But we did make it, and though her version was a bit heavy (think doorstop), it was delicious. Yours looks much lighter and makes me want to try it again.

I've never heard of a wacky cake. But sounds like something I'd love to eat if it's anything like a brownie. Oooh...that pulled pork looks delish!

As I recall, those Snackin Cakes weren't half bad for a quick cake. Aren't those the ones that had the little square cardboard pan?

Hello t.w. I was just thinking that it was about time you did another Retro Cake. Quite an impressive archive you have there now. Keep it up, please.

The cake looks great - but it's the story that yanked me in. If it doesn't have a backstory, it doesn't taste as good. Glad to have found your blog. Nice job!

Funny thing about 'history.' We tend to think it begins with us, so the 'lost cakes' weren't so lost. I knew the Wacky Cake (or Crazy Cake) from Peg Bracken and Elsie Masterton's cookbooks in the 60's. It's been a favorite, and shows up, sometimes in disguise, from time to time. You make it to see if such an impossibility could work, and make it again because it's good. I love your re-enactments.

I love your writing, TW! What a picture you paint with your words :)

GREAT! post. Many of those "Victory" recipes seem like they just aren't going to work and Wha La, they do and often are delicious to boot.

I remember those Snackin Cakes from my youth. I think Kathy's right they had some sort of "wacky" cake pan included.

I have always wanted to try one of these cakes! Yours looks so tempting!

It brings back memories. My sister was making a similar cake a lot when we were one. With ice cream on top we would eat it right out of the oven.

What struck me about this recipe T.W is how relevant it is to today when many people are facing pressure on the household budget and might be looking for a low cost but delicious treat. Colette.

Lydia - fortunately, I can testify that it was surprisingly light. Must be that brand new bottle of vinegar I got for the pantry.

Veron - this is a good fallback recipe, and yes, I'm still swooning over the pulled pork!

Kathy - I do remember the cardboard pan - but I couldn't find any specific reference on the Internet.

Janet - I think I've made almost every recipe on the original Retro Cake list. Maybe it's time to dig into your archives for a new set of challenges?

Marilyn - thanks for visiting! I am intrigued by the stories behind the cakes.

Susan G - a colleague mentioned the name Crazy Cake to me as well. I hadn't heard that name before.

Maryann - Thanks so much!

Louise - I was genuinely surprised at how well it turned out.

Jenn - You should try it. It's the quickest cake I've ever put together.

Helene - I LOVE the idea of ice cream on top!

Colette - It's the perfect "budget cake" - big flavor, without a big investment!

Oh I love it!!! I used to live near the "Crack is Wack" park in NYC. I think all of us--and Edna of the “practical homemaker” voice--ought to whip up a Wacky Cake and play on the swingset there after dusk. I love all of the retro-cool foods you feature!!

Hi Cakespy! I've never seen the Crack Is Wack mural, but I would love any opportunity to play on a swingset with a handful of Wacky Cake! Maybe tomorrow ...