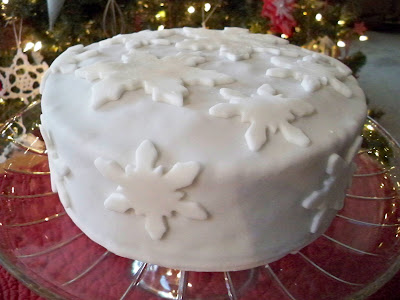 This Christmas Cake is indeed “the dreaded” fruitcake. I’m taking quite a gamble serving this for dessert for Christmas Eve dinner, given the sullied reputation of fruitcake, but it is a “Martha” cake, so as my pal Puck puts it, “How bad can it be, really?” It is indeed the very model of a modern Christmas Fruitcake, with dried pears, dried apples, candied ginger, pineapple and lemon zest, soaked in Armagnac.

The English enjoy a grand tradition of Christmas Cake that came to pass in the late 19th century – iced fruitcakes that are decorated with holly or snow scenes. Some cakes are started months in advance and fed with brandy. Mine’s a tad younger, but hopefully not too callow.

This “Snowcapped Fruitcake” is robed in fondant, and Puck says she’s afraid of fondant. Well, fondant is my friend, but Royal Icing is a royal pain. I ended up skipping the final piping on the snowflakes – the icing was stiff and my piping form is not up to snuff.

Still it was the addition of Armagnac – a brandy made from wine in the region of Gascony – to the dried fruits that intrigued me. I’d never tasted it, and I figured if Martha called for Armagnac, there must have been a good reason. So, short on time as usual, I drop into the liquor store in Penn Station at 8 a.m. and ask for a bottle of Armagnac. The proprietor says, “This is a very nice bottle.”

I say, “I’m baking with it. It doesn’t have to be that nice.” But, it’s the only one he has, so I take it, pay the hefty price tag and head on to work.

This better be one magical cake, Martha! Ah, well, Armagnac is also good for sipping while one is blogging …

For now, the entire family is gathered, from the oldest (80 years old) to the youngest (8 months old). The stockings are filled, the champagne is on ice and the lasagna will shortly go into a piping hot oven.

As that Jolly Old Elf adorned in red is known to say, “Happy Christmas To All, and To All a Good Night!”

What a beautiful cake! The dried fruit combination sounds delicious. Have a lovely Christmas Eve!

It truly is a gorgeous cake, and hopefully worth the investment in time and Brandy. Sounds like you're having a lovely dinner!

The fondant looks perfect, and the cake sounds sufficiently soused -- in fact, you might have to ask your guests to show ID before you serve it! Have a wonderful holiday dinner with the family.

I LOVE fruitcake! I may be one of 10 people on the planet that admit this but this cake would surely attract new devotees. How gorgeous. Anxious to hear what family and guests think. It's mouthwatering to look at.
Happiest of Holidays to you and thank you for all the wonderful blog memories of food and fun this year.

Hee! Glad to see my fear of fondant immortalized!! It sounds and looks quite divine. Hope you do a follow-up on how it was received - I'd love to see how a slice of that looks!

Oh what a festive cake T.W. It looks "divine."

You do know National Fruitcake Day is the 27th? There's even a "Society for the Protection and Preservation of Fruitcake" although, the link is a bit stale.

I'm in favor of the addition of Armagnac, (for medicinal purposes of course:)

Merry Christmas to you and yours T.W. Now pass the Armagnac so we can all get some sleep...

That is one lovely cake. The aged Armagnac would make it very tasty as well.

Such a lovely holiday cake! Too bad fruitcake has such a bad wrap. I love it with cheese and tawny port... but maybe not your frosted version, that would be too sweet, I'll take that with a cup of black coffee.

It's wonderful--I once tried a similar cake (though yours is prettier!) and rather liked it. VERY sweet, but that is not always a bad thing!

Kathy - The pear and pineapple really comes through nicely. Hope your holiday was excellent!

Kalyn - There was so much going on during dinner, it really tasted better to me the next day.

Lydia - Fortunately, most of us are of age - and then some!

DQ - This was a winner - a golden fruitcake, and the brandy really didn't overpower the flavor of the fruit. Hope your holidays have been great - looking forward to a great year ahead!

Puck - It went over very well. Barely a crumb left at this point. Next time you are on the Island, you must stop in for a fondant lesson! Or, get started on that blog ...

Louise - Fortunately, I've got one last piece to celebrate today!

Heidi and Helene - Thanks so much - hope your holiday was Merry!

Janet - I do hope I did the old English Tradition justice. It didn't quite qualify as a "retro cake" but was lots of fun, nonetheless.

Andrea - I thought the flavor was quite subtle in the end. It went very nice with a muscat dessert wine.

Lori Lynn - I've read about the cheese and port - I will have to try that next!

Cakespy - It has been a very sweet holiday! Hope the New Year brings more sweet things for you, too!

You have outdone yourself with this beautiful cake, T.W. Thank you for sharing your talent with us all.