Patriotic Pancakes for a Blog Birthday 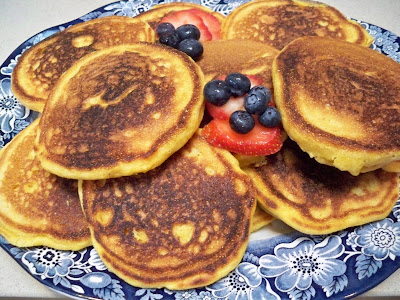 Culinary Types turns two-years-old today, marking twenty-four months and thousands and thousands of words devoted to food and the people who love it! Many thanks to you – my loyal readers – who regularly drop by for a taste of history, drama or comedy, topped off with a great big slice of Retro Cake.

Today is also Independence Day, the birthday of the United States of America. What better way to celebrate both occasions than with a stack of Patriotic Pancakes dotted with the colors of Old Glory? Not just any pancakes, but George Washington’s favorite. Hoecakes – cornmeal pancakes made with buttermilk – are a colonial classic. Field hands were said to cook them on their hoes. According to the archives at Mount Vernon, Virginia, General Washington dined on hoecakes for breakfast each morning, drenched in butter and honey. 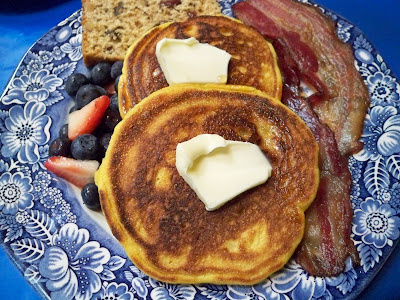 The table is set with Liberty Blue Staffordshire Ironstone depicting scenes from the American Revolution. The centerpiece is a Minute Man Teapot, depicting a member of the militia leaving his family to go fight the British. 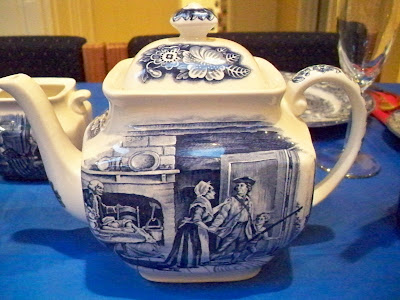 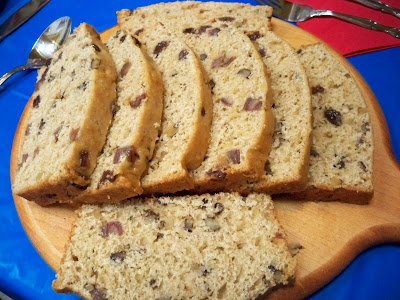 My star spangled breakfast concludes with a Cherry Clafoutis made of deep red cherries purchased at the New Amsterdam Market and baked in a puffy golden custard. Legend says that – as a young boy – George Washington cut down a cherry tree on the family homestead at Ferry Farm. When confronted by his father, he admitted to the act by saying, “I cannot tell a lie.” 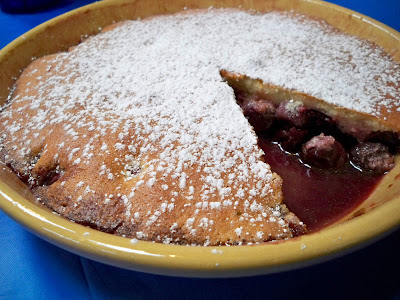 In the great tradition of George Washington, I cannot tell a lie. The hoecakes, and the Cherry Clafoutis were exceptional!

What a lovely patriotic meal! And then china - I have that exact same set I think, my mother collected it in the 1970s (it is my favorite china)

What a coincidence, T.W. - my other blog, the one I write in Portuguese, turns 2 today, too!

Love the pancakes, but cherries are much too tempting!

Although difficult to choose among the thousands of eloquent words, this post has to be my very best favorite! Everything looks so utterly patriotic, the style, the grace, the finesse. Magnifico!

May you spill many more delectable words...

And so we -- our blogs, that is -- are nearly the exact same age! Happy blog birthday, my friend. It is no small accomplishment to maintain a blog of the quality of Culinary Types for two years. Congratulations, and now, on to year three!

Happy blog birthday to you. You picked a great day for it too!

Happy Blog Birthday T.W.! Looking forward to many more of your posts. I made Cherry Clafoutis for the first time a couple of weeks ago. Then I made it with Texas blueberries since they're plentiful right now. The hoecakes look very tasty. I've never actually made any of those, but may give it a try.

Your china is beautiful and perfect for the occasion! I love clafoutis!

Happy blog birthday to you, T.W. and what a delicious looking star-spangled breakfast!

Lidian - isn't the china great? Oddly enough, it was made in England in 1976 for the bicentennial. I guess we're all friends now!

Patricia - Happy Blog Birthday to you! You would have loved the cherries!

Louise - Many thanks! I've never been serenaded via blog before either!

Thank you, Lydia - I feel like I'm in very good company, and look forward to eating and writing my way through the next year.

Kathy - the hoecakes were quite good - worth a try. I am also going to experiment with other fruits in the clafoutis recipe.

Tiffany - hope you had a great holiday!

Jerri - Thanks so much!

Veron - Many thanks! It was a very patriotic start to the weekend!

Happy birthday! I think your treats are certainly perfect for such a celebration!

What a perfectly TW way to celebrate-- delicious food and engaging food history. I only wish I could have shared in the joyous occasion with you. Happy blogiversary, TW. I can't wait to see what you do when you turn three! :)