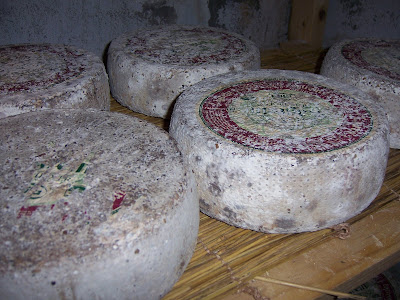 I’m too old to qualify for the draft (although I may never have really “qualified”) but nonetheless, I decide to enlist – in Cheese Boot Camp. (I might have actually given more than a passing thought to ROTC if cheese had been part of the deal.)

I get the first email from my drill sergeant Taylor Cocalis at Murray’s Cheese in Greenwich Village. “Eat plenty of greens (got that covered) and report at 18:30 hours.” 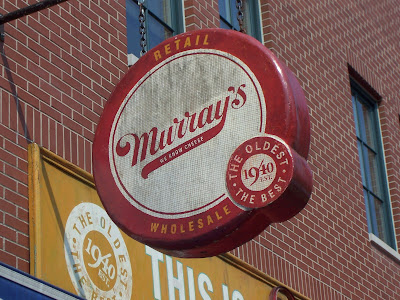 Boot Camp Day One – Tonight is the initial immersion in our tour of duty. The 20 members of our unit – the few, the proud – introduce themselves. Some are food professionals, others are cheese fanatics. One gentleman has come all the way from Florida. “I’m here because Miami is a cheese wasteland,” he tells us sadly. Our drill sergeants are decked out in red t-shirts with military slogans like “Brie all that you can Brie.”

We meet our commander for the evening, Liz Thorpe, a senior officer at Murray’s. She is tall, blonde and attractive. She possesses what amounts to a graduate degree of knowledge in cheese, with a ripe smear of screwball comic Carol Lombard to make things interesting. She’s very funny, but not in a cheesy short of way. In fact, the entire staff at Murray’s is incredibly cheerful and helpful – perhaps a residual effect of hanging around all that fermenting milk protein.

We dive right into our first maneuver, a sampling of 14 … yes, count ‘em … 14 cheeses! It’s literally an international tour of duty with cheeses from Italy, France and Spain. “I don’t recommend 14 cheeses for social settings,” Liz cautions. She tries to get us to understand the nuances of tasting cheese. “Don’t just eat it. We’re going to taste it. That’s slower.” 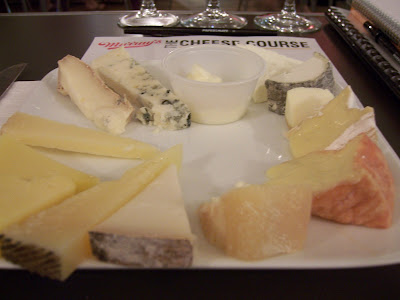 We learn the basics – visually analyze the cheese, sniff it, and then taste it. Try to describe the cheese. Eat the cheese from the inside out, because the flavor can be different at the core of the cheese.

During the tasting, we are introduced to the different milk types – goat, cow and sheep, and the categories of cheese – fresh, bloomy, washed rind, uncooked pressed, cooked pressed and blue. It is all starting to make some sense. It seems that cheeses are pretty much defined by moisture content, color, age, and flavor.

I run the risk of developing an instant addiction to the stinky Epoisses de Bourgogne, an orange, washed rind, oozy pudding-like cheese. Through it all, the helpful staff at Murray’s cheerfully fills our glasses with sparkling wine and a soft, well-rounded red.

We complete our tasting regimen with a pungent blue cheese. “I feel a little stoned,” says Liz. “That was fourteen cheeses!”

I depart for the evening feeling like a round of calisthenics is in order. 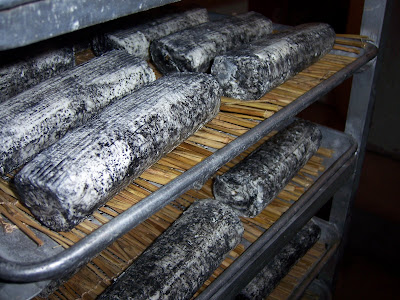 Boot Camp Day Two – We are introduced to Zoe Brickley, Murray’s affineur. She bills herself as the “ultimate layman.” Affinage is translated “to refine,” and Zoe lives underground most of the time overseeing the process of aging in a subterranean chamber far below Murray’s retail store. Zoe did a brief assignment at Murray’s while studying at the French Culinary Institute and decided to stay. We descend to the caves bundled in sweat shirts where cheese for some of the top restaurants in New York is aged to perfection. We are fully outfitted with hair nets and booties. Bacteria is good in cheese caves, but perhaps not our bacteria.

Murray’s basement is a fromage fantasy for cheese fanatics. There are four caves each for different styles of cheese and each with different climates. Each is lined from floor to ceiling with glorious, moldy cheese. There is a bloomy rind cave, a washed rind cave, a tome cave for softer cheeses and a hard cheese cave.

The blast of aromas threatens to assault the senses – musty, mushroom, ammonia, citrus, ash, wet hay, and animal. It smells like a very lively barnyard. 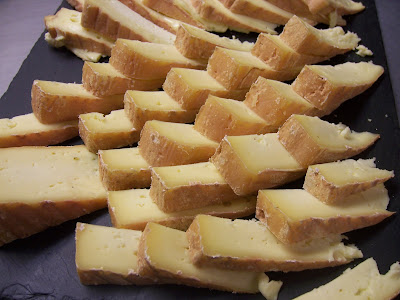 We taste a number of cheeses in their fresh form and aged form to learn the difference in the aging process. Zoe puts out a round of Fleur de Lis fresh and a Fleur de Lis aged. The fresh looks like a mold of pure butter and tastes somewhat bland. The aged version has a chalky white bloomy rind, and has a more complex taste.

In all we sample 13 cheeses in the cave. A key lesson from our session is that when it comes to cheese, beauty is only skin deep. Ugly is good. A gnarly, brown cylinder of Stilton is far more ripe and flavorful than pale, pristine Stilton. 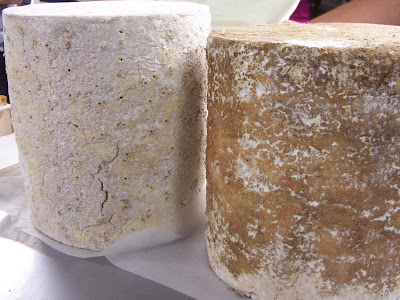 During the afternoon session, Liz returns and we touch on the history and economics of cheese. We learn that Benedictine monks had a major influence on washed-rind styles of cheese. Perhaps that’s why I consider cheese a religious experience? We blind-taste an addition 14 cheeses with Liz guiding us through old and new world styles, which now brings our grand total to 41 cheese samples. The exercise is designed to heighten our senses and powers of observations. I note that one camper is AWOL and never returned from the lunch break. Lightweight. This does require certain stamina. I feel like I’m developing a bloomy rind myself, and decide to skip dinner.

Boot Camp Day Three – I awake with what appears to be a “cheese hangover.” There are 14 more cheeses to sample during our final series of maneuvers, this time paired with wine and beer. Someone may have to call me an ambulance when it’s all said and done. I add 100 sit ups to my morning exercise regimen, just so I have a chance at retaining my trim physique.

Just before drills resume, I run into a fellow camper in the coffee shop next door to Murray’s. “I went jogging this morning, and was sweating butter fat,” she tells me.

Zoe is back for our morning session on the science of cheese. “It’s all about the milk,” she explains. “Milk is amazing.”

We learn about the different fat content of milk from goats, cows and sheep, and the fat content in milk that comes from different bovine breeds. Quality of milk is affected by breeding, feeding and husbandry. 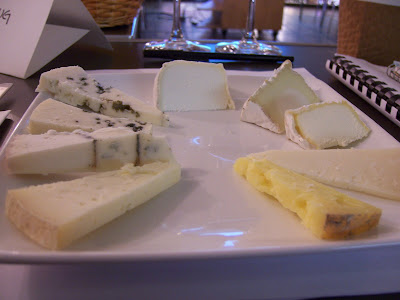 There is even a Mr. Wizard moment, where Taylor makes fresh ricotta cheese from scratch, and coagulates milk before our very eyes.

As if we haven’t already gone completely off the deep end, the afternoon session is devoted to pairing cheese with beer and wine. Instructors Chris Munsey and Amanda Crawford do kind of a battle of the sexes of pairings. He is a beer guy and she’s a wine gal. The best takeaway is that cheese and wine from the same region of the world will often go well together, and a good rule of thumb is to match flavors (grassy cheese with grassy white wine) or wines and cheeses with the same level of intensity. 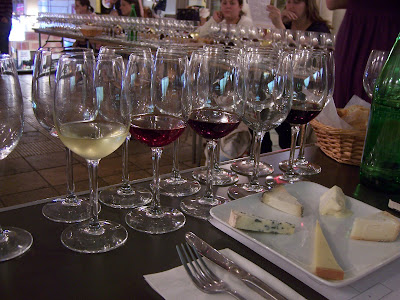 Turns out I’m a wine guy, too. Amanda’s pairings complement the cheeses beautifully, and while I like the selection of beers chosen by Chris, they tend to overpower the cheeses on my palate. However, Chris’s final combination of Jasper Hill Farm Bayley Hazen Blue with Allagash Black is a winner.

And with that final tasting, we are given an honorable discharge.

So that’s the story of my lost weekend in Boot Camp at Murray’s Cheese. The grand total – 48 hours and 55 cheeses. There’s a reason someone came up with the line, “Everything in moderation.” (Was the author perhaps a cheese-making monk??) My first instinct is to check into the Betty Ford Center Dairy Clinic. It’s definitely time to return to a steady diet of cleansing legumes and organic lettuce.

Final thoughts? Three days at Cheese Boot Camp has been physically grueling, demanding all the senses. I’ve confirmed that a genuine love of cheese is more than a passing attraction. The true cheese aficionado is just a little crazy, and that I probably am. I’ve learned a lot, though. I have a real clear sense of styles of cheeses and milk types, can identify most by sight and smell, and I actually think I understand the science behind cheese. I might even try to make it at home, but if that fails, I know I can put together a kick ass cheese platter.

Note to self. It might also be prudent to postpone that upcoming cholesterol test, at least for a week or so.

I never ever thought I would say this, but I think there might be such a thing as too much cheese! Yikes -- I'd think it would all be a bit of a blur after three days. But it's always fun to meet someone with real passion for what they are making. And when you do, you're willing to follow them anywhere. Does this make you want to rebuild your cellar into a cheese cave?

Cheese is probably my second favorite food (after hummus of course). This looks like an absolute dream come true for me! :)

It isn't often that I'm speechless but...

I don't mind saying I had no idea cheese was so complex. Absolutely fascinating. Thanks for sharing T.W. what a wonderful "Boot Camp" experience you had. I leave you with this latin proverb:

What a great way to learn about cheese. Sounds like a very thorough and tasty experience.

That's fantastic that you get to do this. A cheese cave...how exciting. Now I know who to ask if I have a question about cheese.

What a terrific report! I am drooling at the thought of three days in cheese paradise, but my stomach hurts just thinking about it. Very nice job.

not that I ever had any doubt that you would "Brie what you could brie". Oh my. What a wonderful experience. Beecher's in Seattle does something like this (well, maybe not as intensive!). It sounds like a wonderful, and dairy-full, experience!

That sounds like an experience to be remembered for many years. How wonderful and educative, and I enjoyed the touch of humour through your account.

"I feel a little stoned"..haha!

Cheese is a religious experience? Oh yes! What a fun three days you had, but yes, do postpone that cholesterol test! ha ha