Tapas Dancing as Fast as I Can - Part Two 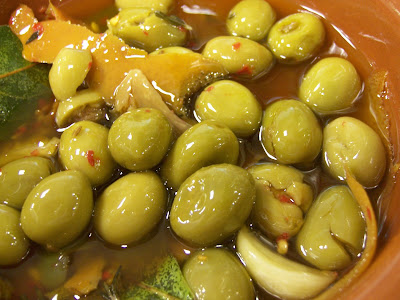 “Chef, should we start sautéing the minced onions?” asks a lovely but slightly overwhelmed woman, one of twenty students who have signed on for our two-part Spanish tapas immersion.

“You know the rules,” snaps our instructor, Chef Sixto Alonso. “The rules are, I cook, and then you cook.”

Indeed, Chef is preparing a demonstration as part of our program for session two of Tapas Essentials at the French Culinary Institute in New York City. But first, he announces that he has “a surprise” for us. He takes us to a corner of the kitchen where what appears to be a 50-gallon vat is simmering away. He has prepared enough Stewed Tripe with Ham and Chorizo to feed the citizens of Aragon, Valencia and Catalonia. He makes a point of mentioning - in case we didn't know - that tripe is the stomach of the cow, and we will get to try the dish during lunch. The rest will be served at a buffet dinner hosted by the school later in the week.

Some of the students appear less than enthusiastic. The assistant, Chef Justin, points out that if we try it, we might actually like it. The vapors rising off the 50-gallon vat smell, well…earthy.

This week, things are a little more relaxed, more akin to the tapas tradition. Following Chef’s direction, we prepare our mis en place in an orderly way, and put together a recipe of Pan con Tomate, or Tomato-Rubbed Bread so we’ll have something to nibble on in case we get hungry. Chef Sixto and Chef Justin have already prepared Verdeho de Acetunas (Marinated Olives) and Almedras Fritas (Sautéed Almonds) which are carefully arranged in individual cazuelas at the front of the room. We are invited to partake. The olives are spicy with tangy strips of citrus peel, cumin and fennel, and the almonds are warm, toasted and salty.

Chef Sixto and Chef Justin line up parallel demonstrations. Chef Sixto prepares Mejillones en Escabeche Jaleo (Marinated Mussels, Jaleo Style). He steams mussels in wine and then the soft yellow pillows are removed from the shells and marinated in a hot mixture of garlic, onions, sherry vinegar and sweet paprika. He drops a bay leaf in the sauté pan, and tells us “Spanish people put a bay leaf in everything.” Chef Justin is simmering chunks of potatoes and sausage for a rustic Patatas a la Riojana (Rioja-style Potato and Chorizo Stew). Chorizo is the spicy red sausage that is a specialty of Spain and is sometimes eaten raw at tapas bars.

Having received our instructions, we move to our stations. I steam the mussels, but mistakenly use chicken stock instead of wine (I add the wine after the mussels have opened.) The acid in the sherry vinegar completes the cooking of the mussels, and the sweet paprika and citrus zest add a nice kick. Alas, I have forgotten the bay leaf, so I probably won't win any tapas awards. 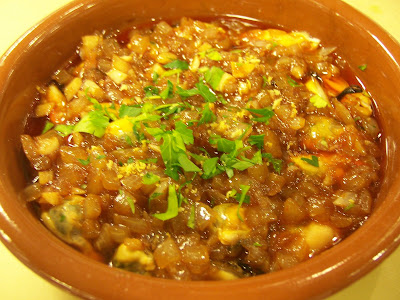 My teammate prepareds the potato and chorizo stew, which as it simmers, becomes the bronze color of terra cotta. A combination of sweet paprika and hot paprika adds an extra jolt of smoky, savory flavor. 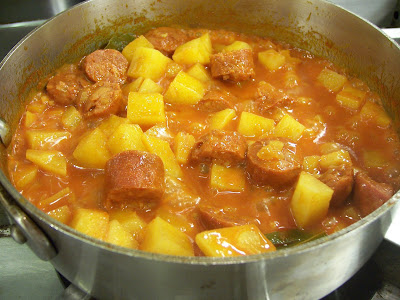 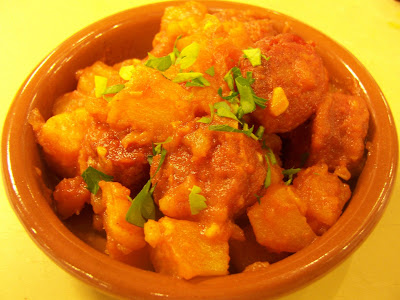 As both recipes simmer, we are given directions on preparing two tapas dishes made with Bacalao or salt cod, a staple in Spain. Chef Sixto claims he has been up since 3:30 a.m. rinsing the salt cod. Esqueixada Salad is eight ounces of flaked cod fish (“It must be shredded by hand,” Chef insists.) dressed with sliced baby red onions, sliced cherry tomatoes, ¼ green pepper, black olives, sherry vinegar and flavorful olive oil. The fresh, briny taste evokes a kitchen garden by the Mediterranean sea. 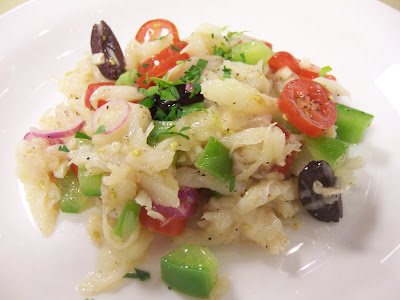 Atascaburras is a traditional puree of potatoes, flaked cod, garlic and olive oil, of which there are many variations. We fill marinated red peppers with Atascaburras and create a presentation that resembles the peaks of the Pyrenees Mountains. 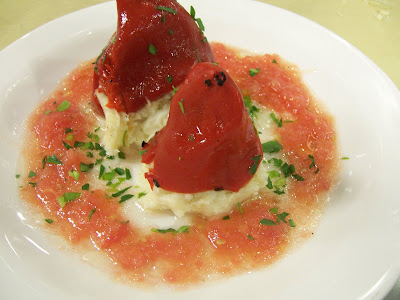 As we dine on our creations, I remember that I’ve not yet tried Chef’s tripe. Chef Justin has added garbanzo beans to the finished dish. It is fiery and strong, with the leathery flavor and texture of offal. Not unpleasant, but an acquired taste, nonetheless.

Our final assignment is the preparation of Croquetas, made from a mushroom béchamel sauce, flavored with Serrano ham. The sauce is chilled, but it is still tough to roll in flour and bread crumbs. However, when dropped into hot olive oil, the croquetas quickly become crisp and golden. 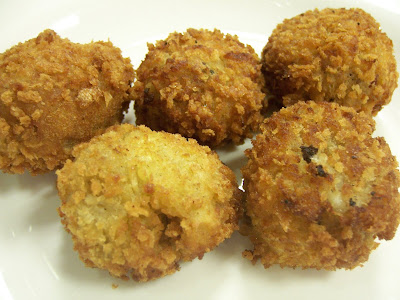 We clean up our workstations and it is time to receive our diplomas acknowledging 10 hours of intensive training in Tapas Essentials. During the two sessions, we have transformed about 10 simple ingredients into a feast “in the Spanish style.” The olive oil has flowed, and as reminder, I note there is a faint hint of olive oil fingerprints on my diploma cover. Chef Sixto seems genuinely reluctant to see us leave, which suggests that by working side-by-side for two sessions, we have found the spirit of friendship and hospitality that is at the heart of the Spanish tapas tradition.

Chef Sixto probably would not approve of the tapas classes I host in my kitchen, because we don't use any ham or pork, which is so prevalent in Spanish cooking. We do a lot of fish, and some vegetable tapas which aren't that common. But we do have the spirit of congeniality, and a beautiful array of small plates at the end -- and plenty of sangria!

I actually like tripe. My grandmother used to make a wonderful tripe and potato dish. Wow, I haven't had that in over 30 years!

WOW T.W. that sound like quite an elaborate Tapas class.

I don't know if I still like tripe but like Maryann, my grandmother and parents made tripe quite often. (I suppose it was inexpensive in those days.)

Sounds very fun. I would love to take a class like this.

I tried to get my dad a class on pasta at the Institute last year, but it was all sold out. :( You've inspired me to try again.

Hi Lydia - let me know the next time you're preparing tapas. I'll be there in a flash!

Maryann - I'd never had tripe before, so I had to give it a try.

Louise - You should have seen the spread when we put it all together!

Kalyn - thanks for visiting! I would recommend seeking these specialty classes out. It was well worth it.

Susan - Your Dad would love the classes at FCI - These short immersion classes are great. Let me know when he's there and I'll join him for a glass of limoncello!

Im curious as to why you guys cooked croquetas in hot olive oil? interesting.

did you like the tripe? i love it. we call it pata y panza.. a Cuban delicacy.

Hi Flanboyant! Thanks so much for visiting. We were told that olive oil is used for everything, so we followed Chef Sixto's orders. Is there a different method? I thought the tripe was very good - it's not a flavor I'm accustomed to, and would probably eat it in small doses, since it's really quite rich in flavor.