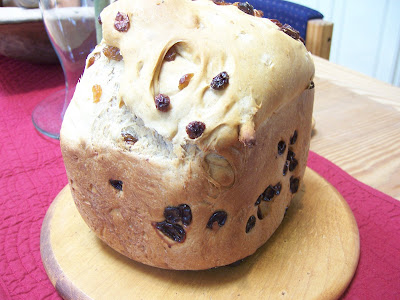 Growing up, Wonder Bread was the “It” loaf in the grocery store.

I can just hear the gasps out there in the blogosphere. Stick with me. This story will improve quickly.

We had to have Wonder Bread. Hey – have pity! We were just little guys. Taste and nutrition really weren’t relevant. We were fascinated by the red, yellow and blue balloons printed on the wrapper. It was the heyday of Captain Kangaroo and Super Friends and the dawn of kid marketing. That airy, spongy white bread was entertaining, too. We would roll it into balls and pop it in our mouths. It was just that soft.

Fortunately, Mom was health conscious, and Wonder Bread made a quick exit from the household as whole grain breads began to appear at the supermarket. We dined on many varieties. My favorites were kid-friendly – date and nut bread or raisin cinnamon bread spread with cream cheese. Today, I’m a total convert as I forage for nutty grains and double fiber in the bread aisle. Wonder Bread seems so 1960s.

I’ve done some extensive study in bread, but the differences between the conditions of the industrial-sized classroom and the home kitchen can be significant. I love kneading, but I’m really challenged when it comes time for the bread to rise. In class we had proofing boxes, but my kitchen is just a little drafty. I’ve tried leaving the dough by the heater in the basement, or putting it in the oven on keep-warm, with minimal luck. I even read recently that putting the dough on top of a television while viewing is an option. I wonder if an episode of The Tudors will make the dough rise more quickly than a rerun of The Andy Griffith Show? 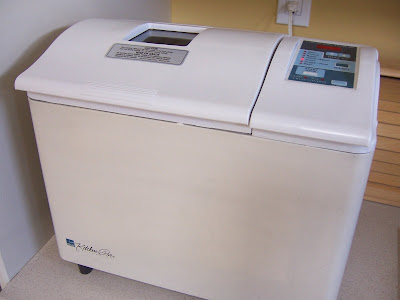 During the recent kitchen decluttering, the Regal Breadmaker caught my eye again. It had become invisible on the counter after many years of neglect like most specialty appliances do (I’m surprised my professional declutterer didn’t target it for extinction.). It has always felt a little like cheating to resort to the breadmaker after all that intensive, hands-on class work, but then I have an epiphany. We used monstrous electric mixers with digital programs that handled the kneading in class and we let the dough proof in temperature-controlled boxes. It’s not really that different. So why not let technology be my bread-baking friend? (Give me about three minutes, and I can rationalize and dispel most forms of guilt with a quick wave of the hand.)

I have a touch of trepidation. The big box has been asleep for several years, but it emerges from hibernation and soon it is whirring and squealing like Cinderella’s furry friends. The ingredients for Raisin Cinnamon loaf layer into the bread pan in minutes – bread flour (the high protein flour has more gluten and results in better structure), golden raisins and fragrant cinnamon. Dropping the raisins into the machine as the dough rotates and kneads is almost as much fun as those red, yellow and blue balloons of yesteryear, if not just a trifle dizzying. 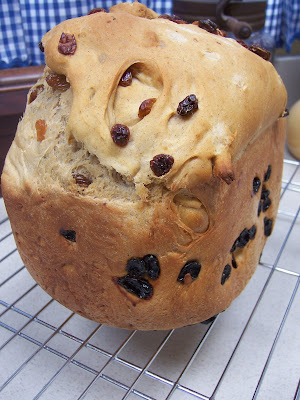 Admittedly, the process is devoid of most of the Zen associated with bread baking, because the machine does the heavy lifting. While it’s not the same sensory experience, with a little help from my breadmaker the results are satisfying and the exotic, warm smells of raisin and cinnamon fill the kitchen. Spread with Crosby’s Bees Honey from Vermont, it is truly a Wonder-ful bread.

I love the look of that loaf, and I wouldn't even attempt the Wonder Bread balls we used to make when we were kids. I've resisted getting a bread machine, because I do basically like the process of making and kneading dough -- but I know I'd bake more often with the machine. Oh, for an even larger pantry where I could store all of these cool tools...

That loaf looks very interesting , lots of character. I do have a confession, despite my love for great boule, there are times in the middle of the night when I just crave plain white bread and a thick layer of chees pimiento!

My dad still eats a version of Wonder Bread. I just can't imagine why. I have trouble finding the right place for my dough to rise too. The top of the refrigerator usually works for me. I have a bread machine I've never used, just sitting around, taking up space. Maybe your post will inspire me to get it out.

Well there's no contest between the Tudors and the Andy Griffiths show.I'd say that the Tudors is hot enough to make any dough rise.
Colette

Lydia - I'm going to try and bake a loaf a week, if only to justify the counter space. Of course, I should really be making whole wheat!

Veron - Ha! "Character" is a good way of putting it! It's either the most rustic of loaves or it has a pompadour! Love your guilty pleasure - I'll have to try it!

That is one tempting loaf! It is so tall. I love cinnamon raisin bread with cream cheese.

Very intriguing looking loaf of bread (great job on the picture, by the way!). I'm new to bread baking, just wishing to start and I think you've just convinced me to get a bread machine if I do so. Thanks for the share!

That loaf belongs in a gallery--each viewer will see something different in those swirls of carbohydratey goodness!

RE: Wonderbread, we were raised on rye, spelt and other dense breads, so wonderbread--along with the show Full House, saltine crackers and chee-tos--was one of those forbidden things that I binged on when I went over to other kids' houses whose parents weren't such damn hippies. ;-)

I think that's the largest bread I have ever seen, T.W. :)

I really like that bread! And I loved reading this - I used to make bread a lot, pre-children, and really enjoyed it. Now that they are older, I ought to teach them how as well...thanks for reminding me about bread!

We used to have that Hollywood diet bread when I was a kid, and after that, Pepperidge Farm, which I rather liked.

And I also liked the old-fashioned Sunbeam bread truck with the picture of the girl...

Hi Nupur - raisin bread and cream cheese still brings out the child in me!

JJ - I hate to sound like I'm favoring technology over tradition. I do enjoy making bread the old fashioned way. But given how busy our lives can be, the bread machine can produce an excellent loave of bread in short order. I think it is worth the investment.

Hi Cakespy - since the loaf comes from a bread machine, I suppose it is already considered post-modern! MOMA is nearby, so perhaps they are accepting new works! I have a feeling, one day, that you will create a Chee-tos cupcake!

Hi Patricia - We like to go for King Sized portions here in the US!

Hi Lidian - I do remember the Sunbeam Bread Girl - I wonder where she is today?

Oh, how I love cinnamon-raisin bread, especially for French toast! And your mile loaf looks perfect for it! As for Wonder Bread, sorry my friend, but I always had crusty Italian bread even for school lunches.

Hi Susan - I'm kinda teasing on the Wonderbread thing. I hardly ate it. Hardly ever ...

Betty C - I haven't thought of Space Food Sticks in years! We wanted those so badly, as we all wanted to be astronauts when we grew up!