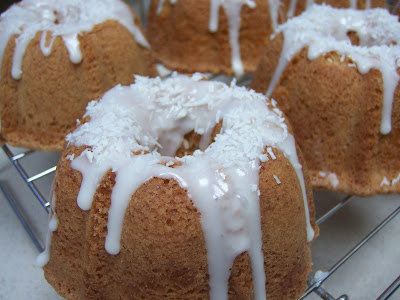 I confess. I have recently developed a little obsession with mini-bundt cakes.

I usually try to vary my kitchen experiments, but ever since those Little Jackie Ds popped out of the oven, I’ve been on a quest to find recipes that I can, well, miniaturize.

I’ve heard about this syndrome before. In some people, it manifests itself with an overpowering desire to bake macarons.

Of course, I’m not gaining any deep insight from this endeavor, or preparing to start a business. I’m just eating the results and probably gaining at the waistline.

My issue with obsessive behavior is not new. I once aspired to own every recording ever made by Olivia Newton-John. A pasta obsession (I would eat it by the pound) in the mid-1990s resulted in a bit of excess weight-gain, just before the low-carb craze took over. The Hollywood writers strike did little to curb my addictive fascination for the TV program Lost. Every day at 3:00 PM, I make a Pavlovian-trip to the office vending machine for a bag of M&Ms – dark chocolate only. Then there’s that issue with red sweaters, but it’s really just a seasonal obsession.

I’ve also had a strong attraction to the diminutive. Don’t bother super-sizing for me. Growing up, I was a big fan of the pint-sized super hero, The Atom who had the power to reduce himself to microscopic stature and I voraciously read every volume of The Borrowers, a British classic about a family of tiny people who live under the floorboards of an English country estate. And, I had trouble containing my glee when the Irwin Allen TV science fiction fantasy “Land of the Giants” was released on DVD. The show never made the big-time but I loved the episodes of a Lilliputian band of explorers who crash in a land filled with gargantuan adversaries. 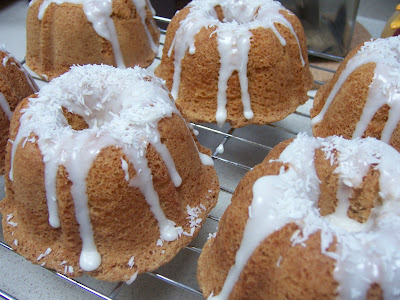 Dorie Greenspan’s “Baking: From My House to Yours” is the perfect guide for anyone looking to experiment a bit. Her “Playing Around” section of each recipe encourages the adventurous, and I promptly begin to mess around with her classic Coconut Tea Cake, found on page 194. In my miniature world, a single bundt cake divides into six, and I guild the lily of what she describes as a “plain cake” with cardamom and a dressier rum cream glaze. The little cakes have a nice kick with the flavors of tropical coconut, jaunty dark rum and the mysteriously seductive essence of cardamom.

(Adapted from Baking: From My Home to Yours by Dorie Greenspan)

Generously grease and flour six to nine mini bundt molds (the coconut can tend to make the cake stick to the pan). Sift together flour, baking powder, salt and cardamom.

Put the coconut cream in a saucepan with the pieces of butter. Heat until the butter is melted. Remove from heat but keep warm.

Fit mixer with whisk attachment. Beat the eggs and sugar at medium high speed, about three minutes until pale and thick. Beat in vanilla and rum. Reduce speed to low, and add the dry ingredients, mixing just until blended.

With mixer on low, add coconut. Then add the warm coconut cream and butter, just until combined. Divide batter among mini-bundt molds, being sure to cover the inner tube with the batter.

Bake at 350 degrees Fahrenheit for about 25 minutes. Let cool 15 minutes and then remove from pan. 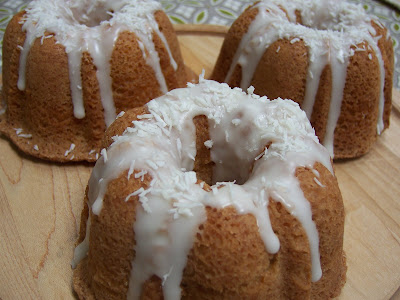 Inevitably, this mini obsession will end, and I’ll move onto something else, like filling every room in the house with cut tulips, or collecting every piece of writing ever published about George Washington. But, if in the near future, I happen to announce that I am starting a new blogging project – something along the lines of baking 365 days of mini-bundt cakes – somebody please stop me.

For someone who doesn't bake, I have an astonishing number of bundt pans. I'm not even addicted to the cakes -- I'm addicted to the pans! I do have two different patterns of mini-bundt pans, too. I've never used them. Maybe we should find a way to swap obsessions....

One more post like this and I'm going to be forced to go out and buy myself some mini-bundt pans! These little cakes look particularly tasty.

Those look almost as good as the Jack Daniels cakes, yum. I just put my minibundt pan in a donation box yesterday. I think I'll retrieve it now.

These are so exciting! I don't know that I would have thought of mixing the flavors of rum and cardamom, although I guess they both go well with coconut so it makes sense.

That is a kind of obsession I call healthy. :)
They are beautiful, T.W.!

are you sure you are not going to open a bundt-cake shop :D...they do look sooo cute, don't they?

Lydia - if you bring the mini-bundt pans to the desert island, I'll do all the baking!

Kathy - Do it!! Think of them as cupcakes with a little more character!

Rochelle - I rescued mine. I was trying to prove to my professional declutterer that I could make good use of the mini-bundt pan. It's earned its place back on the shelf.

Maryann - you are at the top of the list!

Fearless - Thanks for visiting! the cardamom is subtle, but it is such a nice compliment to the rum and coconut.

Hi Patricia - I agree - I'm all about the healthy obsessions!

Hi Veron! I'm not quitting my day job, but these little guys are pretty appealing! I'm trying to dream up some new varieties ...

I quite understand your love for mini bundt cakes. I mean, they're so cute & they've got such specific designs...:)

OK, these are so cute I am not sure if I want to cuddle with them or eat them. Knowing me, I'd make use of their cuteness by taking pictures of them with my guinea pigs then stuff them in my mouth! They're nothing bundt adorable (sorry)...but they sound like they taste good enough to match the cuteness!

Valentina - aren't the patterns on the bundt cakes interesting? I'll bet there's a story there.

Cakespy - I've been wondering why I have been fighting the urge to snuggle with the little bundts! :-D

I like mini pans. Anyone. It so cute. I once made mini carrot cake. Or sometimes I'll make mini banana bread. But the obsession comes and goes. Those are lovely.

I'm so glad I didn't miss these little darlings. They look simply delectable!

Helene - The mini carrot cake sounds wonderful! Did you make it in a mini-bundt or mini loaf pan?

Hi Louise - If not for the freezer (and blog photography), these little ones would only be a fond memory by now!

T.W., These look SO good, I wish I had some right now with my tea! It is rainy and cold and they would - well, be just the ticket. Will write out recipe for sure...

Oh, and I really wanted to give you an E for Excellence award - I want you to know you were on my list, but you already have got one! :)

Just wanted you to know I was thinking about you!

By the way, that is me just above (Laura) - used my history profile name! Still Lidian just the same though -

Lidian - Many thanks! And do write the recipe down for the next rainy day!

You kill me with your little obsessions-what a hoot! A house full of tulips would be beautiful, though! Instead, I think your passion for the mini bundts is wonderful-you did a terrific job!ANYTHING with rum~my mouth is watering!!

Now, I'm not sure if I should buy mini-bundt pans or not. You're truly tempting me, but I'm afraid I'll get obsessed too. ;)

Hi Jann - I only shared the happy obsessions! Thank goodness for cake!

Susan - Go buy those mini-bundt pans! You know you have to have them!!