Asparagus Tart and Rites of Spring 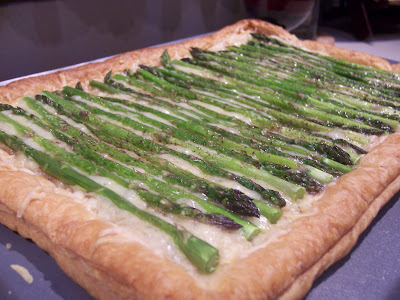 March seems just a little early for a change of seasons. There’s still a distinct chill in the air, but now and then, I will encounter a tantalizing hint of spring. A bashful lavender crocus pokes through the once-frozen ground. If I am particularly alert, I might spot a robin. And, of course, there is the appearance of a massive flock of canary-yellow Marshmallow Peeps in the supermarket.

For me, the real harbinger of spring is the arrival of pencil-thin shoots of emerald-green asparagus. Certainly, asparagus is available year-round, but the tastiest are those tender, impossibly-green shafts topped with feathery deep-purple buds that show up in the best markets about the time of the Vernal Equinox.

Asparagus is an ancient, perennial plant from the lily family. It was cultivated in Egypt and the Roman Empire. The Roman cookery manuscript Apicius – from the third century – recommends cooking asparagus upright in hot water. Asparagus took root in France in the 1400s, and England in the 1500s, and eventually migrated to North America in the late 19th century. 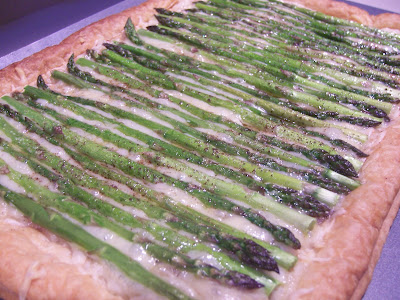 This Asparagus Gruyere Tart from Everyday Food has become one of my annual rituals of spring. A flaky, buttery pastry frames the slender stalks, highlighting their earthy beauty. It is a delicacy worth savoring in a ethereal season that often times seems fragile and fleeting.

Too pretty to eat!

I have made this same tart many times! In fact, it's the recipe that actually turned me on to the Good Food Fast cookbook (which compiles recipes from Everyday magazine). When the local asparagus start coming in, I go to a farm in Oneco, CT, where they let you into the sorting room and you can choose the width of asparagus you want (from pencil thin to quite fat), just picked that morning. When I make this tart with that farm-fresh asparagus, it never fails to impress.

Thanks for kicking off the season of tarts! I've never made an asparagus tart but with gruyere it sounds delicious!

I'm such a sucker for fresh asparagus, T.W. Absolutely love them. And I have that book, this tart has been on my mind for a while now... :)
Yours looks mouthwatering!

Wow TW! I always feel sorry for myself coz there's no fresh asparagus available in my country. And when I see your tart, I'm dying to taste it & I so envy you!

Happy Spring to you also, TW!

Hi Nupur - I agree, but it tasted so nice, too!

Lydia - Although I've read many descriptions, I've never seen asparagus "on the farm." Would love to be able to pick asparagus right in the sorting room.

Hi Patricia - you must make it! It is really easy and so satisfying!

Valentina - So sorry you don't have fresh asparagus. It is the best time of year for it here.

Maryann - hopefully the rain will be ending as spring arrives!

I just picked up some pretty asparagus... I may have to make this for Easter.
What will the family think?

This would put a spring in my step! (sorry, that was bad). I adore asparagus and have never seen anything quite like this tart--it is beautiful, but I disagree with Nupur--not TOO pretty to eat! :-)

Cakespy - I am perfectly alligned with your thinking. I ate the whole thing!

I need a piece of this right now, TW. Seriously.