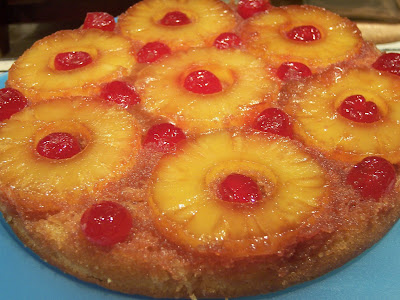 It doesn’t take much to provoke my inner culinary comedian. This time, it’s a young colleague we’ll call “Ms. Zany,” who hails from western Pennsylvania. She’s been ruminating over how best to use that bottle of rum she brought back from a recent holiday in Saint Martin. The inspiration hits her like a balmy Pacific breeze.

Now, I know you’re all excited, but don’t check your calendar or call up Hallmark. There’s no such thing as Hawaiian Shirt Day. Zany made it up. Although some of our colleagues are a tad skeptical, we proceed to plan the event with unfettered enthusiasm.

For me, it’s the perfect opportunity to conjure up that classic Pineapple Upside-down Cake that The Old Foodie suggested I bake a while back. The origin of the cake is a bit topsy-turvy in its own way. While I always assumed that Pineapple Upside-down Cake was an invention of the 1950s, the book “Fashionable Food” by Sylvia Lovegren reveals that Upside-down Cake made with fruit was actually an innovation of the 1920s. It was sometimes cooked in a skillet, and depending on the sophistication and upward mobility of the baker, might even go by the name “Caramel Pineapple Cake” or the very stylish “Pineapple Glacé.”

At the time of the Roaring Twenties, pineapple was considered an exotic fruit. If the recipe called for pineapple, it was often dubbed “Hawaiian,” whether the dish had any relation to the island paradise or not. It was quite the fad to serve tropical-themed “Hawaiian” menus and it allowed suburban chefs to travel the world vicariously without ever leaving the dining room. Indeed, some food marketer was well aware that such a cake could sell more canned pineapple slices, but the classic recipe from the Dole Pineapple Company calls for a box cake mix. Hoping to stay true to my culinary training, I select the “from-scratch” recipe found in the Joy of Cooking, which calls for a homemade batter made from eggs, vanilla and buttermilk. 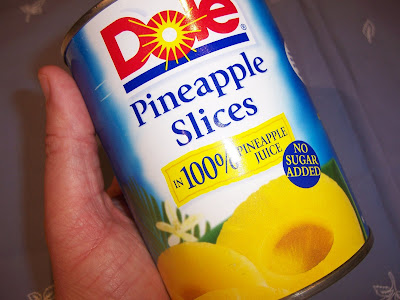 There is something peculiarly intriguing about canned pineapple slices. Each slice is uniformly cut and identical in size. I’m not sure anything like this really exists on Earth. But, I can’t take my eyes off them, nor can I shake the thought that decades ago, an ingenious and mathematically-blessed test kitchen chef determined that exactly seven slices would fit perfectly into a nine-inch cake pan. 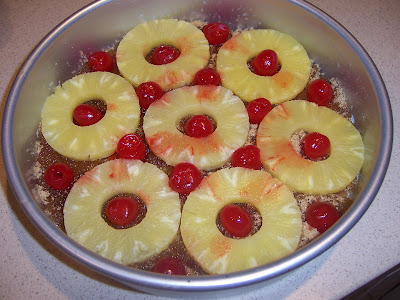 The maraschino cherries sit snuggly in each pineapple hole like little crimson jewels. I increase the butter and brown sugar, so the topping is especially gooey. It’s just the right-sized baking project for a weeknight. The cake is done, and I’ve got the dishes washed and my feet up by 10:30 p.m.

Hawaiian Shirt Day dawns and the New York City weather is as steamy as the South Pacific. Enthusiasm is starting to build among our associates. Even my road warrior colleague, “Splint McCullough” arrives in town for the event, ready for a little Island action. He’s purchased his Hawaiian shirt for $5.00 dollars off a clearance rack. We suspect the fabric is completely unnatural. “I’ve never been to a luau,” Splint says, “but I do like the idea of a one-ton pig roasting on a spit.” He then thinks about it for a moment. “Why do they put the apple in the pig’s mouth?” he wonders out loud. “What’s the pig gonna say?”

As pictured below, Splint has a reputation for taking the cake. 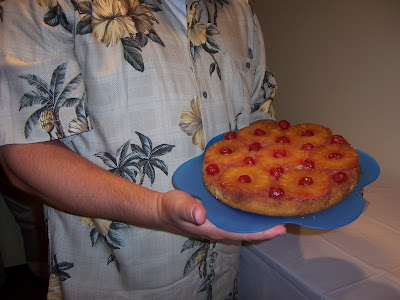 I invite a few special guests, including “Rocky” from the other end of the building. In terms of sheer mileage, our offices are about as far away as you can possibly get, so we really have to make plans to see each other. He’s been craving my watermelon cake, and while this is not exactly in that league, it’s an appropriate introduction to my retro cake addiction.

The Boss makes a perfectly-timed arrival just as the Magnum PI theme is blasting from the speakers. You kind of get the feeling he’d rather be on a beach south of New York surrounded by women. He’s sporting a classic Hawaiian shirt with multi-colored parrots that his wife has been trying to destroy for years. Splint’s advice is, “Don’t walk too close to pet shop windows.”

Our intrepid associate, “Babs Gordon” is pushing the fashion envelope. She is indeed wearing a Hawaiian shirt …that is pinned to her pullover. Babs will do anything for cake. 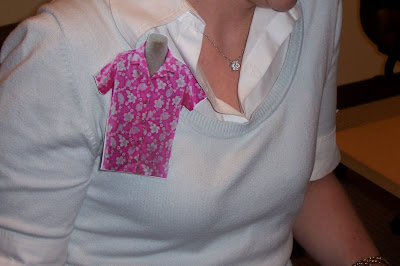 Zany pours some killer rum punch cocktails, we thrill to the beat of Hawaii Five-O, and I slice up the Pineapple Upside-down Cake. It is gone in about thirty seconds. In a short time, we have managed to consume a week’s worth of sugar, cheese, crackers and alcohol, as well as violating the corporate dress code and a few rules of good taste.

It is Splint, ever the culinary philosopher, who manages to sum up the occasion. “What I’ve learned from today is that when you live near active volcanoes, healthy food is an afterthought.”

Sounds like a fun place to work! Believe it or not, I've never ever made pineapple upside-down cake. Seems like a gap in my culinary repertoire that I need to fill!

Looks like the perfect cake for Hawaiin shirt day! I like Zany, she seems to conjure up reasons for celebrating.Babs is smart to pin that hawaiin shirt. Looks like a great recipe, I wonder if you could add chunks of macadamia nuts into the batter?

I haven't baked a pineapple upside down cake in more than 10 years, T.W.! This looks so good!

Lydia - we try to make it fun. I don't think I'd ever made upside down cake before - it's something we're all so familiar with, but it's worth a try.

Veron, there is no limit to Zany's imagination - I'm anxious to see what she comes up with next. The recipes suggestes adding pecans instead of cherries to the topping (I had to use the cherries!) but I'll bet you could through macadamia nuts into the batter.

Patricia - It's time for you to try it again!

What a beautiful pineapple upside down cake! I've made it once & everbody liked it!

My mom made a pineapple upside cake every year for my dad's b-day since it was his favorite. Yours looks just like hers and is making me so nostalgic for a piece. I've never made one before, but perhaps I should .